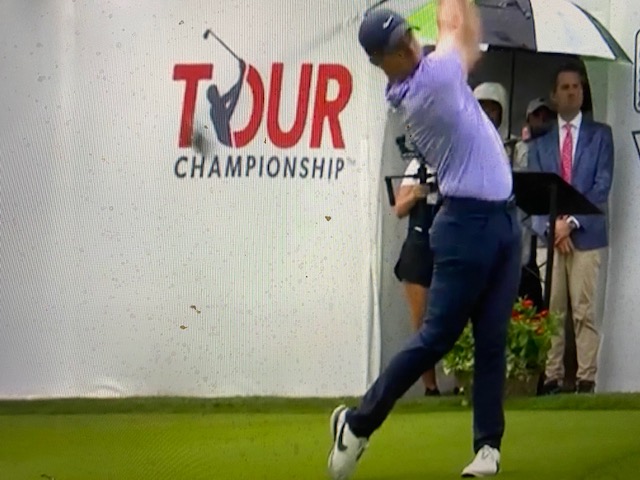 Twenty nine players came to Atlanta to claim the Tour Championship having qualified from the preceding three weeks of grinding through qualifying tournament stops, where one bad shot or missed putt could cost the player a spot in Atlanta. Unfortunately Will Zalatoris who would start the tournament in second place had to withdraw with back issues that will require treatments in the coming weeks and months. Of all the players to get injured, you wouldn’t select Zalatoris but he is a Mighty Mite who hits as far as anyone else on tour. Scottie Schleffer came into this event as the leader and would start the event in first place at 10 under par. This is the only event on Tour where the players are handicapped and an advantage is awarded by Fed Ex point totals.

Course conditions at East Lake would be idyllic for birdies with hot humid weather coupled with soft greens that had been rained on. It was going to be a birdie fest so the handicapping system really didn’t mean all that much to the players. Scheffler would not yield his advantage and played with great aplomb and confidence for this first three rounds. His driver was cutting according to plan, he was putting and chipping magnificently and entered the final round with a six shot lead. This is a field of proven winners with many layers of PGA Tour scar tissue so no lead was secure especially when the golf course was so inviting–there was nothing to stop these players from going low–no wind, no rain, receptive greens etc.

A number of players put themselves in position to compete on Sunday including Rory McIlroy, Sungjiae Im, Xander Schauffele, Justin Thomas and Patrick Cantlay. I’m catapulted out of the gate with a four under 32 and was eventually done in by a double bogey on the back nine. McIlroy and Scheffler were in the final group and it just seemed that Scheffler seemed a bit unsettled from the very beginning of the round as he bogeyed the first hole. Scheffler didn’t drive the ball very well in the final round as his customary fade did not fade and he was left with a number of bunker shots and pressure shots that often lead to bogeys. He had plenty of bogeys and he finally relinquished the lead to McIlroy on the 16th hole with another bogey while McIlroy was making par. Scheffler just didn’t seem to be himself and he was consistently going through his yardage book and changing clubs. He didn’t seem to be committed to shots and seemed to be slower than his normal pace of play. It’s hard to say if the gallery had any impact as it was pulling for Rory throughout the round.

By the seventh hole, Rory was breathing down Scheffler’s neck having cut the lead to lead to 1 shot and then catching him. McIlroy seemed super focused and he made a couple of mistakes as well especially on the 14th where his second shot after a tremendous shot was flared into the right rough. He then chunked a chip shot and made bogey.  He got that shot back with a terrific 31 ft. putt on the difficult par 3, 15th to tie Scheffler again.  I believe the tournament was won on the 16th hole as Rory took on the fairway bunker on the left and could not clear it.  His adrenalin on the fairway bunker shot must have been “off the charts” as the bunker lie wasn’t great but he got all of it but the ball sailed way over the green and into the crowd.  Without the crowd, the ball may have been 25-30 yards further, but the friendly gallery grandstand gave him a change to get up and down and to his credit–he holed a 12 ft. putt for par after an almost miraculous chip shot from the crowd.  Under pressure, playing for the Tour Championship, these guys must have vampire blood running through their veins as this chip shot would be difficult to get close.  Scheffler just couldn’t recover and couldn’t get himself into a birdie position on the final two holes and McIlroy closed it out for victory.

McIlroy’s 66 on Sunday would best Scheffler by 7 shots to win the championship.  It is very difficult to comeback from a 6 shot deficit in a Sunday final match but McIlroy’s focus, persistence and determination ruled the day.  While Scheffler had to be disappointed with his performance, he had a fantastic year and undoubtedly will be back in this event many times in future years.

Note on the US Senior Women’s Open

Last week I wrote about young Ben Carr who I believe made a terrible decision in the final match again Sam Bennett. Sam hit his second shot on the par 5, 13th hole out of bounds and all Carr had to do would have to do would be to lay up, make a par and win a hole to get the match to 2 down.  Carr decided to go for the green in 2 also and then proceeded to hit the ball out of bounds on top of Sam’s disastrous shot. They ended up having the hole in bogey and Carr eventually lost the match 1 down.

On Sunday, Laura Davies, one of the greatest women’s champions on the LPGA Tour, held a commanding 4 shot lead on the field at the US Senior Women’s Open.  The golf course in Ohio was so difficult that she was one of four players under par and birdies were as scare as coconuts on apple trees.  Laura’s tee shot on the long par 4, 428 yd hole went sailing left into the trees.  Davies had a little more than 200 yards to the green and her second shot would have to carry these trees with a degree of difficulty of 10 out of 10.  However, Laura is a champion and decided immediately to hit the shot to the green and watched it ricochet and rattle into the trees again.  All she had to do was to punch it out down the fairway, potentially make par and no worse than bogey and she would have maintained an insurmountable lead.  Instead she whacked at it again, and the ball rattled into the trees again.  She finally extricated the ball into the left rough and onto the green, where she three putted for a snowman 8 and that was the end of her tournament.  Jill McGill, a 50 year-old amateur, claimed the title in a steady and masterful performance.

So in two weeks, we’ve seen two terrible errors in judgment cost players potential victories in USGA championships.  One is one the best amateurs in the country and the other, one of the most famous and successful LPGA players of all time.

THIS IS THE GAME OF GOLF