Golf in the Philippines 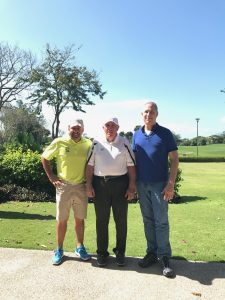 Philippe at left and Richard Cohen on right at Sta. Elena Golf Club

I hadn’t played golf in the Philippines since 1982 but thanks to Richard Cohen, I was able to get a game with Philippe Tordjman at Sta. Elena Golf Club about an hour outside of Manila.  Of course, playing golf was the right thing to do after a 24 hour trip from San Jose.  I left San Jose at noon on Friday and was on the first tee at Sta. Elena at 10AM on Sunday.  The course is a terrific test that is fair and challenging.  I liked the risk/reward type holes that dotted the landscape throughout.  Fairway bunkers were well placed and I managed to find a few of them during the round.  I played with a set of Titlelist blade irons, which I really liked but I had difficulty adjusting to the 8.5 degree Taylor Made driver. The greens were pretty good and you always say that when you make some putts during the round.   No excuses here as I was satisfied with my round including pars on the long par 3’s and gave me a respectable score of 86 (not my standard but I’ll take it).

Philippe was fabulous to play with as I had just met him.  He is the member of the club and a terrific player and gentlemen.  A native of France who also lived in San Francisco, he is now a permanent resident here and has a glorious home off the 12th hole.  He slammed the ball around all day and made some putts for a round of 77 that could have been lower.  He was a gracious guest and he has an open invitation to play Pebble Beach with me any time as he has not played there.