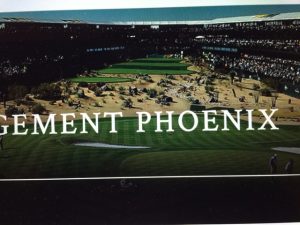 We played the TPC Stadium Course on Saturday 3/18 which is the home of the Waste Management Phoenix Open.  The PGA event which was completed on Super Bowl Sunday drew over 600,000 spectators this year and is, by far, the biggest show on the PGA Tour.   I had the privilege of playing in the pro-AM in this event when it was sponsored by Motorola in the late 90’s.  At that time, Motorola was the most important name in the cellular phone business and brought us the first set of consumer hand-held devices.  Competition from Apple and Samsung eventually preempted Motorola with the smart phone and we all know what has happened since.

The TPC Stadium Course presents a nice layout with tee boxes ranging from 6,110 yards to 7,264 and there are a number of interesting holes and the course presents a nice variety of shots.  The par 4, 445 yard 8th hole is particularly difficult with the wind directly in your face.  The front pin position that we played today was particularly treacherous since any shot below the hole would not stay on the green and descend into a mounded valley similar to the greens at Pinehurst No. 2 or the 18th at St. Andrews.  All of my playing partners ended up in that valley and two of them ended there twice as their chip shots came up too short and went right back into the valley.

The best part of the Stadium Course is the closing holes.  After you have survived the arduous 14th hole of 461 yards against the wind (actually harder than the 8th if the wind is up (and it was), you begin the closing holes.  The 15th is a birdie hole with an island green and measures only 502 yards.  The famous 17th is a risk reward par 4 of 294 yards, cleverly bunkered with water on the left all the way up the fairway and through the green.  Of course, I drove it into the bunker with about 85 yards to the green but I did escape with a par.

The fun hole is the famous 16th actually made famous by the tournament.  The 16th can also be known as the Roman Coliseum as stands are constructed to sit over 20,000 for spectators to watch professionals play a 163 yard hole.  There is no etiquette as the crowd either boos or cheers for shots to the green based on the result.  The professionals love it as they play to the crowd and urge them on–no other tournament has such a phenomenon.  As you leave the 15th green, you actually walk through a tunnel similar to the Christians entering the Coliseum to the jeers of the assembled masses.  Today, I would have been booed as I pulled my 8 iron slightly off the green on the left.  Fortunately, I chipped the ball to a few feet and made par.  I could hear the imagined boos from the crowd as I chipped the ball while workers continue to deconstruct the stands after nearly two months from tournament play.

The greens today were not of tournament caliber but seemed to speed up as the temperature rose.  Phoenix is unseasonably hot for this time of year.  I was expecting temperatures in the high 70’s, low 80’s but it was 95 degrees when we completed our round at 1PM.   We were fortunate that the wind blew pretty well throughout the round which acted as an air conditioner for the warm temperatures.  There’s not much to complain about when the East Coast is shivering or digging out of the latest blizzard.