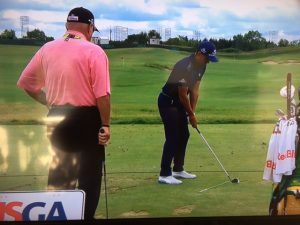 Is this really the US Open?  The cut line was -1.  At the end of 3 rounds, 5 players are more than 10 under par. Justin Thomas posted a nine under 63  as and he’s not even the leader-Congratulations, Justin.  This is a US Open where Dustin Johnson, Rory McElroy, Jason Day, Justin Rose, Henrik Stenson all missed the cut.  The US Open seems to be just another tour stop as the wide fairways and treeless plains of Erin Hills may have been a better host for the National Long Driving Contest.  Rory McElroy quipped earlier in the week that no one should complain about the rough as the fairways were wide enough.  If you can’t hit those fairways, you won’t be playing on the weekend.  How prophetic,  as he didn’t hit the fairways and he missed the cut as he couldn’t overcome an opening round 79.  There will be plenty of golf fans that will disagree with this assessment,  but I believe the US Open should be the most difficult test in the sport.  When touring pros are hitting pitching wedges or their second shot on a 500 yard par 4, something is really amiss.  At the end of 3 rounds,  there are usually only a few players under par with 18 holes to play.  In this Open, 43 players are under par going into the last day.  The course is set up to be a birdie barrage as the modern professional hits the ball so far that the 7700 yard+ venue offers no challenge to these guys.  Equipment and the modern ball have rendered length as no difficulty to today’s touring professional.  The USGA has “shanked” another event and I doubt that Erin Hills will be in the US Open rotation anytime soon.  Tomorrow’s final round should be exciting but it won’t be a duel of two or three players.  Par used to be the US Open standard of excellence but now it is clearly birdie.  14 players are within 6 shots of the lead so it will look much more like a regular tour event.

It is very difficult watching this Open as Fox continues to deteriorate in its performance of the coverage of the event.  Fox doesn’t know how to cover tee shots and fairway with its yardages and arrows all over the place.  Joe Buck needs to stick to football because he cannot anchor this event and never will be.  After a number of misfires, Fox hired many former professionals such as Curtis Strange and Paul Azinger to lend credibility and experience to the broadcast.  Their efforts are lost in translation with the supporting cast, many of whom have little or no experience.  There is no Johnny Miller, Roger Maltbie, Judy Rankin, Peter Alliss which brought considerable expertise and fun to the coverage. I would be amazed if TV ratings aren’t down for an event that is rapidly losing its luster as a major championship.

We’ll see if something special happens tomorrow as I believe the winner will come out of the pack.  Rickie Fowler is right there.  I’d like to see Patrick Reed break through–he has the grit and game to win this thing.