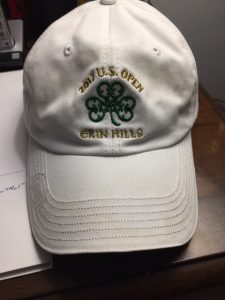 Congratulations to Brooks Koepka, the new US Open champion, who played a steady round yesterday and made the putts and shots when he had to winning by three shots.

There seems to be considerable whining about the setup at Erin Hills and how the course yielded such low scoring.  The course was the same for all the players and Koepka emerged from a competitive pack of 14 contenders to take the title.  The length of the course, nearly 8,000 yards, presents no difficulty to the players who can drive it over 300 yards.  Rainfall during the week outside of playing time, enabled the players to attack the greens which were more receptive than expected.  However, on Sunday, the wind finally blew at Erin Hills and once again, par in a US Open became the standard.  Justin Thomas who was blasting it over 320 yards was a little bit shorter on Sunday and his power game became somewhat muted.  Perhaps it was the curse of shooting his 63 on Saturday which became a new record to par (-9) in a US Open.  All the contenders certainly made valiant efforts with excellent rounds from Hideki Matsuyama and Brian Harman.  Harman simply grinded it out with an even par 72 which was a very good round.  He hung in there and played smart throughout his round.  Charley Hoffman’s short game left him on a few holes as he chunked a few chips and yet had a very good 71 to finish 8th in the tournament.  Charley is going to break through in one of these majors as he’s had two really good majors with this one and the Masters.  Rickie Fowler just didn’t do anything special on Sunday and I’m sure he’s disappointed in a 7th place finish but he played well throughout the event.  I wanted Patrick Reed to storm out of the pack but his game hasn’t yet rounded out in 2017.  I look for him to be a factor in the last two majors and predict him to win the PGA Championship.  Koepka’s win was no fluke-he has talent and tremendous power.  The power enabled him to get into position to make those crucial putts which generated the birdies for hm to win.

In my 3rd round post, I was pretty critical of the venue and the USGA setup.  The final round overcomes this criticism although some of the points are still relevant.  The USGA can be proud of this event as it provided the excitement that I felt was missing in the preceding three days.   The setup was fair with wide fairways, penal rough and tricky pin placements.  Erin Hills would have been tougher if the wind blew as it normally does, but the players liked it and I’m sure the site will get another US Open down the line.  On to Shinnecock Hills for 2018 as the world will be watching after the greens burned out during the 2004 Open.  Shinnecock is a terrific venue and the New York fans will be out in full force.  I intend to be among them as I’ve had a number of wonderful memories of this place.