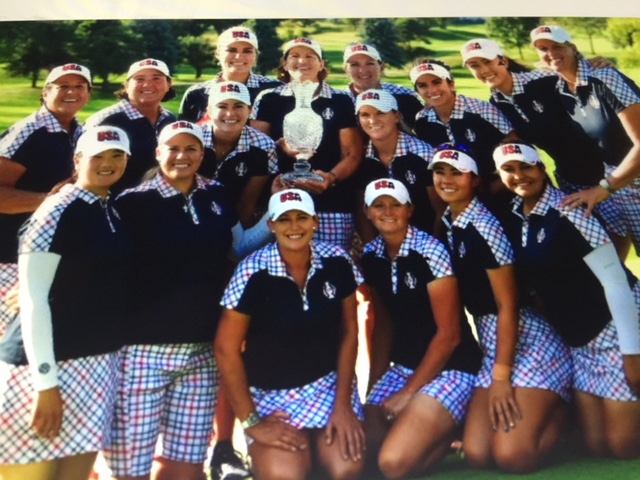 The USA Team won the 2017 edition of the Solheim Cup rather handily but the competition was far closer than the final tally of 16 1/2-11 1/2 reflected.  The Solheim is the LPGA’s version of The Ryder Cup pitting the US against the European professional women.  The event is very important to the US women on the LPGA tour.  There is a tremendous amount of pride that these women exhibit in competing for their country.  I believe there is added pressure on the USA team inasmuch as the US no longer dominates the LPGA Tour.  The South Korean women occupy 6 out of the top 10 spots on the LPGA Professional Tour.  Only Lexi Thompson and Christie Kerr occupy spots in the top 10.  The USA has now won 5 out of the last 6 competitions in this event and it’s becoming obvious that the depth of the USA team had a significant advantage going into the first round of play.  Nevertheless, golf competitions aren’t won on paper, they’re won on the golf course and the USA was tested throughout the event.

In my view, the captains play a very important role in this event.  LPGA Hall of Famer Julie Inkster role was critical in selecting the lineup and match-ups.  Inkster is a proven winner and has tremendous intensity and competitive instincts.  It’s one thing to have a great game which she has, but her successful career and dogged determination played an important role in leading these women to victory.  European captain and one of the LPGA’s best players of all time, Annika Sorenstam, also did a terrific job keeping this event competitive and on Sunday in the singles matches-anything could have happened.

With a big lead going into the Singles matches on Sunday, Inkster decided to seal the deal by sending out her big guns at the beginning of the field. Lexi Thompson was the lead off lady for the USA as the first point of the Singles is usually a big momentum statement for the remainder of the matches.  Sorenstam countered with Anna Nordqvist, the European side’s best player.  Sorenstam hoped that a victory by Nordqvist could rally the European side.  The match was one-sided in Nordqvist’s favor for the front nine as she took a 4UP lead going into the final nine holes.  All of a sudden, it became very interesting as the European side began to rally taking leads in many of the following matches in process.  Thompson was “counseled” by Inkster who apparently chose just the right words for the occasion.   All of a sudden Thompson birdied the 10th to win the hole and that had a spectacular eagle on the 11th with a shot from 112 yards that found the bottom of the cup.  The tide turned in the match and the grind was on.  Thompson actually took the lead on the 15th hole to go 1 UP after a barrage of birdies on 13, 14 and 15.  Nordqvist fought hard as she could and birdied the final hole to square the match.  The momentum had turned with this match and Paula Creamer and Christie Kerr added victories to give the US 2 1/2 points for the first three matches.  The end occurred with Angel Yin’s final putt in the fifth match to seal the victory.  It was a fitting conclusion to a hard fought competition.

I believe the LPGA should think about creating another event to differentiate itself from the PGA and create some additional excitement to showcase the skill of these women. I would not change or try to eliminate the Solheim Cup competition but I believe an additional event could be staged in a non Solheim Cup year that would establish a round robin event that would include a match play competition with a team from South Korea and another team representing the Rest of the World.  There are significant number of good players from Japan, China, Thailand and Austrailia.  For example, former No. 1 player, Lydia Ko, could lead such a team.  The LPGA needs to do a better showcasing their product and an event like this could producing an exciting competitive event.

Congratulations to the USA in winning the Solheim Cup–a tremendous achievement in the world of golf.   THESE GIRLS ARE GOOD1

The Need for a Bigger Venue