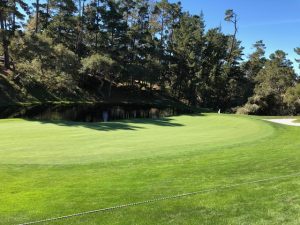 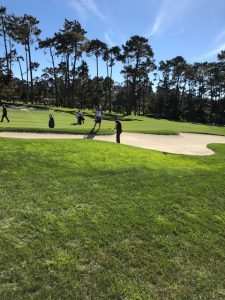 Patrick Reed in the bunker on the 13th at Spyglass Hill 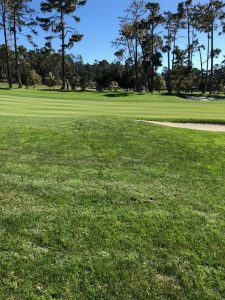 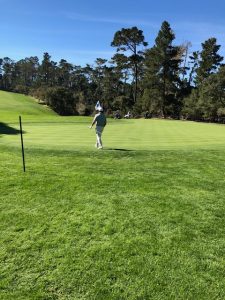 There are two very distinct highlights for this week’s AT&T Pro-AM at Pebble Beach, California.  The first is the weather, which is the best I have ever seen here.  Temperatures are in the high seventies and there is little to no wind so you would think that the professionals would crush the course venues–Pebble Beach, Spyglass Hill and the Shore Course at Monterrey Peninsula Country Club.  Well, they are, and I believe the cut line might be as much as 2 to 3 under par.  Good scoring is evident at Pebble and MPCC but Spyglass Hill continues to be the hardest of the 3 courses.  The second major highlight is the leaderboard…the leadership is chock-a-block with household names such as Phil Mickelson, Dustin Johnson, Jason Day, Steve Stricker and Paul Casey.  Casey is 4 shots back but he is done with Spyglass Hill shooting 2 under par 70 today.  We followed Paul through his round at Spyglass and he had the longest drive on our home hole-no 13 at 315 yards, which is an uphill par 4 of 460 yards.  Last year the players slogged through significant rain for the first two days and soggy conditions persisted through the weekend.  This year the  weather is great for the players, spectators, tournament officials etc., and will enable the tournament to have a very competitive weekend.  My fear is that it’s never going to rain again here in Northern California and these temperatures are warmer than any summer’s day here in Pebble from June to October.  The weather is so great that it feels very weird.  I’m picking James Hahn to win this thing as he has been pretty consistent in his ball striking and seems to have significant momentum.  Hahn has a look of determination and has had a tendency to lose his cool when things don’t go well for him but he’s making progress at taming those demons.  Jordan Speith overcame his funky start and shot 66 (5 under par) at MPCC.   Speith missed the cut last week at the Phoenix Open but he should be playing this weekend.  I believe his putting woes will soon be a thing of the past.  The leaderboard also has a newer set of names such as Merritt, Hossler and Suri and Wise all of whom are playing very well but the weekend may present some interesting challenges when competing with the guys that have won multiple times on the PGA Tour.  I watched Rory McElroy four putt the par 4, fourth hole at MPCC which is one of my favorite golf holes.  I have never four putted that green as it was painful to watch McElroy make a double bogey 6 there.  The good weather on the Peninsula will make this a putting contest for the contestants this weekend.

We had a wonderful day yesterday at Stanford University Golf Course thanks to member, Patrick Yam.  The weather was similar to today and we were able to get a round in under 4 hours with some pretty cool shots such as a chip in on the par 3, 14th hole.