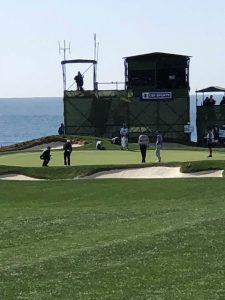 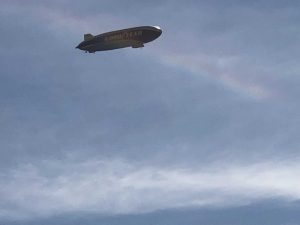 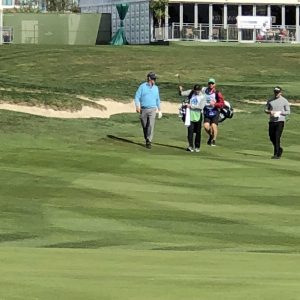 The stage was set for the final round at the AT&T Pebble Beach Pro-Am on Sunday.  Dustin Johnson, Jason Day, Rahm and Phil Mikelsen were all on top of the leaderboard to take down the leader-Tom Potter.  Who is Tom Potter?  He shot 62 at MPCC  on Saturday and had a shot at 59 but he bogied the last two holes.  Potter had won once on the PGA Tour at the Greenbriar Classic in Virginia and had been working himself back into the game after a freak accident in 2015.  He would be playing with Dustin Johnson on Sunday at Pebble.  Most pundits would predict that Potter would be a non-factor on Sunday and be a footnote to a run by one of the “names” of the game.  Johnson tee shots flew 40-60 yards past Potter and, of course, Potter would not be judged as the best left handed golfer on the course with Miikelsen in contention.  So what happened?  Potter was unflappable as he hit fairways and greens and was not intimidated in the least by Johnson’s driving.  Johnson helped the situation by dunking the ball in the hazard on the easy par 3, 5th hole and made a great bogey there.  Potter made a wonderful birdie on the par 5, sixth hole with an excellent chip shot.  Still, everyone was waiting for Potter to make a big mistake and give the field the opportunity to catch him.  It’s happened before when an unknown third round leader succumbs to the pressures of the final round and ends up becoming a footnote to the event.  This was not going to happen to Potter–he continued to hit fairways and greens and gutted it out to a final round 69 to win by 3 shots over all of the household names.  Mickelson looked like he was going to make it interesting with back to back birdies on 16 and 17 to get to 14 under.  He would need an eagle on the par 5-18th iconic hole at Pebble but his second shot landed in the front bunker.  His remarkable bunker game couldn’t be executed here and he finished with a par and a final round 5 under 67 for 14 under par.  5 players finished tied for second with 14 under par as each of those players just couldn’t get over the hump to put any pressure on Potter.

Potter was thrilled with his victory overcoming injuries and indifferent play over the past 5 years.  He demonstrated grit and determination as it takes a lot of concentration to watch your opponent blast tee shots 50 yards past you.  The game of golf produces these type of results where the talent of the professional is so great that on any given week, someone like Potter can emerge and beat all of the favorites. Potter’s achievement was unexpected by the golf world but he displayed an inner passion that allowed him to execute shot after shot without being distracted.  He completed his personal assignment and can now enjoy a title that no one can question.   Larry Fitzgerald, the All-Pro wide receiver for the Arizona Cardinals won the Amateur portion of the event easily with his professional partner Kevin Streelman who finished sixth in the event.  Fitzgerald summed up his accomplishment for the week by stating, “golf is the hardest game out there.”