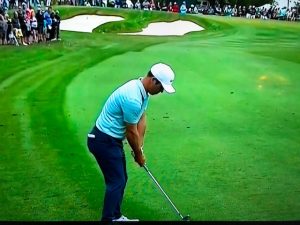 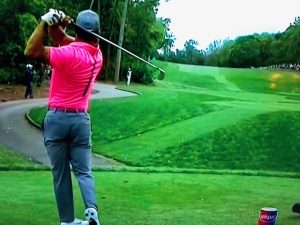 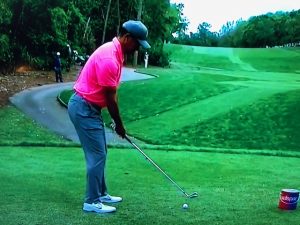 The headline for this blog post might be the only place where Paul Casey gets some recognition.  The story of this tournament was the continued comeback of Tiger Woods who nearly pulled off the victory on Sunday.  It was another exciting PGA event which coerces me to write about it.  There were a number of storylines to this event.  Tiger’s comeback continues and why is this happening?    As I have stated in previous blogs, it takes time and experience to overcome physical and mental difficulties in the game of golf.  Tiger was impacted by multiple physical difficulties which automatically has a mental impact when you can’t execute the shot that you believe you should be able to do routinely.  I noticed a significant change in Tiger’s swing this week, which surpassed his performance of the previous week where he also finished well in the tournament.  He is not just hitting shots-he is unleashing them with significant power and confidence.  The photographs here on the right demonstrate how much torque he is getting through the ball.  On this par 4-he is hitting his trademarked “stinger” with a 3 iron.  He took on the fairway bunkers on certain of the par 5’s while his fellow professionals decided to hit 3 woods and avoid them.   Tiger is now driving the ball over 300 yards and on Saturday and Sunday this week, I didn’t see any errant tee shots.  In fact, in the final two rounds of the tournament, he only missed one shot–an errant 7 iron on a par 3 which caused his only bogey of the day on Saturday.  It seemed to me that his swing path and follow-through of getting from right to left through the ball is significantly improved which is responsible for the power.  This skill brings other shots into his game–such as the 240 yard-3 iron stinger to bisect the middle of a small fairway.  He lost the event if you think of this performance as a loss, which I don’t only because his putting on Sunday wasn’t as good as it was on Saturday.  On Saturday, it looked like he couldn’t miss anything and putts were rolling in from everywhere.  On Sunday, he played just as well, tee to green, as he did on Saturday but just couldn’t convert the putts.  Conversely, as poorly as Paul Casey putted on Saturday, his puter on Sunday was smoking hot and he only took 21 putts for the round.  Anytime, a PGA professional can take 21 putts in a round, he is going to win the tournament or come very close–Casey’s poor putting on Saturday almost put him out of contention and Sunday’s performance enabled him to sneak in.  The guy that lost the tournament was Patrick Reed.  Reed played brilliantly all day and had 3 holes to post a birdie and win the event outright.  At the end the putts didn’t roll in and he had a brain hemorrage on the 18th hole.  After missing a 7 iron from 133 yards to the difficult pin placement on 18, he decided to putt through the fringe–a two-putt would get him into a playoff with Casey.  The putter was a terrible idea and the ball couldn’t clear the crest of the hole six feet from the hole and rolled all the way back down to where he had putted it.  He knew then that he had made a horrible mental error and his comeback chip fell a few inches short–his bogey 5 ended his hopes for the playoff and he would have to settle for 2nd place.

For Casey, it would a deserved but unlikely victory as he had difficulty in final rounds before as this was only his 2nd win on the PGA tour.  For Reed, who has won 5 times on tour, it was a sobering lesson in mental acuity for the next time he’s in a similar position.  The big winner seems to be Woods.  His detractors never believed he would contend again but he has broken through the mental part of the game to a stage where he once was the dominant force.  He seems to have clearly overcome his physical ailments and his mental state has been buoyed by his performance in this event.  He has to be considered a serious contender at the Masters.  In this tournament, television was off the air as the final pairing of Corey Connors and Justin Rose struggled through the day and were never in the picture.  Connors bogied the first few holes and was clearly shaken by the position he was in.  He had failed to qualify for the event at Monday qualifying and got in as an alternate–it was a successful week for him in that context but it seems it might be difficult for him to get back into this position again after leading the tournament for 54 holes.  Rose’s putter clearly deserted him on Sunday and he putted like Casey did on Saturday.  Rose is a fine player and he will be a contender in all the major championship venues this year.