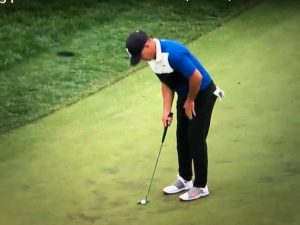 The event has been dominated by two stories. Both stories are sharing the significant headlines.  The first is the outstanding play of Brooks Koepka where he led the tournament by 7 strokes going into the final round.  This is an unusual position to be in on the PGA Tour and brings a very unique mental challenge to the player.  The golf course is very difficult and anything can happen in a Final Round and history will show that large leads have been squandered and lost in the Final Round.  A good example is Dustin Johnson’s meltdown in the final round at the 2010 US Open at Pebble Beach where a large lead was squandered with some uncharacteristic poor iron play.

Many pundits favored the long-hitting Koepka coming into this event and he is playing with a lot of confidence.  He went into the final round with a 7 shot lead on the field and it could have been more than that if he had not been a few short putts which led to back to back bogeys on the 10th and 11th hole in the third round.    Koepka has a steely demeanor that reminds me of Jack Nicklaus’ ability to focus on each shot.  In the final round, Koepka’s countenance changed suddenly on the back nine as the course became very difficult with temperatures dropping and the wind blowing with gusts of 30 mph. The blimp had to evacuate the premises due to the high winds.    Koepka’s lead started to melt as he found himself alone in thought while Dustin Johnson made a run in the group in front of him.  His playing partner, Harold Varner, imploded early in the round and was trying to stay out of Koepka’s way so Koepka had to witness some of Varner’s poor round,  which had to be distracting.  Koepka airmailed the 150 yard, par 3 14th for his fourth bogey in a row and his lead was cut to a single shot.  Johnson was unable to capitalize and get over the hump and could get no closer as he went back to back bogey on the finishing hole.  Koepka made it interesting by missing the 18th fairway with a two shot lead and had to strike a mighty blow to get into a position to pitch the ball to the green, which he did.  He finessed a nice chip shot to six feet and sealed the deal and secured his 4th major championship and his second PGA Championship in a row.  He certainly “staggered” into the house but got the job done.

The media had a field day with Tiger Woods.  Expectations were high that Woods would be competitive in this event coming off his brilliant Master’s victory.  Many were predicting another victory for Tiger, which would have been improbable at best.  The Masters victory was a phenomenal feat but there was good reason that there was some potential probability for Woods.  Conditions and experience would favor Tiger if he could put himself in position to do it and he was able to accomplish this at Augusta.   The field wilted over the final holes and Tiger’s experience ruled the day.  Playing Bethpage Black would be a completely different challenge with tough conditions and marginal weather conditions.   It simply didn’t happen for Tiger this week and it’s on to the US Open where he has a better chance than he had at Bethpage but at age 43, it will be a significant challenge as well but I like his chances to compete there.

This article is a significant disservice to the game of golf and some of the initiatives that are trying to promote the game with children and the underprivileged such as The First Tee.  The piece presumes that Woods success in golf would  produce a  “Pied Piper” effect on the game of golf leading a multitude  towards participation in the game.  No one individual in this world can accomplish this–the game is bigger than one individual.  Woods success was infectious in drawing people to watching the game on television as ratings soared every time he played or whenever he contended in a tournament event.  Despite his star power, playing golf and watching golf are two different things.  The article quotes Woods as saying, “There’s so many different things that kids can get into….playing five hours, five and one-half hours, of a sport that doesn’t sound too appealing….” is detrimental to what the game is all about and I’m sure is taken out of context for this article. What bothers me about the article is that it seems to depreciate the efforts of The First Tee and other youth programs to get underprivileged kids into the game.  The game offers far more than the athletic aspects of the game promoting ethics, integrity and sportsmanship which are values sorely lacking in today’s society. It would behoove the Times to focus on these things rather than blame Tiger Woods for the lack of progress in getting the game of golf to blacks, Latinos and Native Americans.  The article cites the various efforts of The First Tee and tries to balance the article with some good examples but the tone of the piece leads to the conclusion that it is an uphill battle.  This may be the true case but it’s a battle worth waging with benefits that accrue to the society in a sport that uniquely teaches the lessons of life.