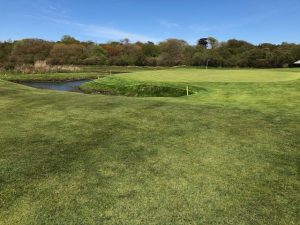 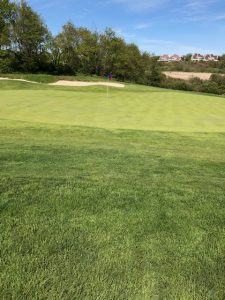 I’ve always wanted to play Newport Country Club.  I really love playing links courses especially on the East Coast of the United States.  I finally got the opportunity to play there as my nephew was graduating from college in Bristol, Rhode Island.  As usual, I had contacts in the area and exercised those contacts and behold I was told to show up on 5/21 at noon.  The club was hosting the Girls Rhode Island State Championships but by the time I got there, they were on the 13th hole.  As you drive in, the clubhouse sits majestically on the top of the property where it is visible on many of the holes throughout the layout.  I wandered down to the Pro Shop where I was greeted and “yes”-I was on the tee shot for noon.  Here I am playing with my Connecticut set of clubs, which are Ping Eye irons (circa–1995), a Taylor Made F-7 driver (at least 10 generations ago), a Calloway Big Bertha 3 and 5 Wood (really!) and an ancient Taylor Made putter.  I went down to the range for a 10 minute warmup and it wasn’t looking good–these clubs were old!  However, these clubs did not receive the benefit of 3 years of golf lessons so I just had to persevere and follow the process.  Some process, I pushed my first drive into the right rough on the first hole-a 442 yard monster par 4 and managed to lose the ball in the high rough.  I was beginning to wonder if I would have enough balls for the round as I only had six in the bag (somehow the myriad number of balls in this golf bag had disappeared as they are stored at my brother’s home).  On the second tee, the memory muscle from the lessons returned and the ball flew into the fairway.  Every other tee shot on this day would land in the fairway.  The wind was howling through the sunlit skies so the object was to take what was given and not try to do too much,  Keep the ball in play and rely on the short game to score-if it happened-fine–if it didn’t happen-fine-the idea of crisply hitting the ball would be enough for this wonderful day at this prestigious venue.  All of a sudden, things started to happen–approach shots landed within range of making pars and the pars started to roll up.  We reached the par 5’s in regulation and made easy pars there but a number of 50-75 yard wedge shots with a Ping Eye W, which I hadn’t played with in 7 years started to produce pars.  With a double bogey on the first hole, we completed the front nine in 39 and then proceeded to par the next 4 holes.  We then came to the 215 yard, par 3, 14th hole.  This hole, for me, had only one play–there was an opening or receiving area on the right side of the hole but the pin was all the way on the left side.  My idea was to get on the green on the right side and then try to two putt for a par.  The left side of the hole was guarded by bunkers and any shot hit to the left would end up on the side of the cliff for a certain double bogey.  I grabbed the driver and smacked it exactly where I aimed it-so I thought I would be about 75 ft. away for a two putt par.  Arriving at the green, I was in total shock–the ball stood about a foot away from going into the hole–apparently the green sloped from right to left drawing the ball back to the pin position on the left–it was as close to another ace as you could get.  Now, I’m one under through 5 on the back and came to the  18th at even after a good bogey on the 17th.  The finishing hole is a 420 yard, par 4 with the green elevated at the top of the hill just to the right of the clubhouse.  My drive found the left side of the fairway but I had about 200 yards to get to the green–the Callaway 3 wood is too old and decrepit for that shot so I decided to lay up to the foot of the hill with a 5 iron which left me a 70 yard pitch shot.  Once again, the ancient Ping wedge was pulled a little but it was safely on the green and I would probably end with another bogey.  As we arrived at the elevated green, the ball had actually released from right to left leaving me with a six footer for par but very fast.  I literally blew on the ball and it merrily rolled in to the center of the cup for unlikely par and a back nine of 36 to complete the round at 75.

Newport is fantastic–I know I’m saying that because you always say that when you play well.  I was stoked because I played well with clubs that are at least 25 years old which tells you something about clubs.  For me, Newport had two distinguishing characteristics:

Thanks to the President and Head Professional for giving me this special opportunity and an offer is extended to reciprocate at Pebble Beach. 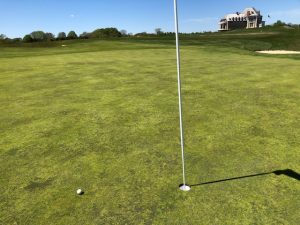 Birdie putt on the 14th hole

← PGA Championship--A Brook (Stagger?) in the Park Women's US Open, Cordevalle Renovation and Other Stuff →