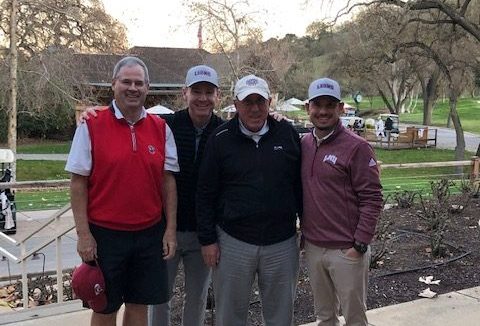 The PGA Tour moved back into California with the completion of the beginning of the season in Hawaii.  The Torrey Pines South Course is one of the best public courses in the United States and presented a significant challenge to the field this week. 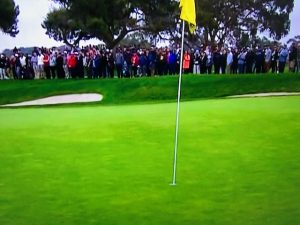 Tiger’s approach shot on No. 2–ball is in the hole

There was considerable expectation for Tiger Woods to go after Tour Win No. 83, which would top the record of Sam Snead’s 82 victories.  Woods was in good form and I haven’t seen him swing the club since he was at the height of his powers in 2000 when he dominated the game.  His 3-0 record in the President’s Cup has added to the credible notion that he can continue to win on the PGA Tour at age 45.  Late January in Torrey Pines usually brings cool weather and fog along the coast.  The rough is up at about 4″ so it’s more than a reasonable test for the field. 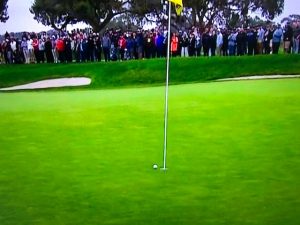 Oops! Tiger’s shot spins out of the hole! Has to settle for birdie.

Sunday’s highlight was Tiger’s approach shot on No. 2 where he holed his second shot for an apparent eagle; however, the shot had so much backspin that it actually came out of the hole and Tiger had to settle for a birdie–bummer!  I have never seen a shot holed from the fairway only to spin out of the hole…certainly, it will be the No. 1 highlight of the day on ESPN.  Unfortunately, there would be no highlights of anything in sports on this Sunday as the world mourns the tragic death of Kobe Bryant.

Usually, watching golf tournaments on television can be boring.  On this particular Sunday, 12 players were within 5 shots of the lead.  On a pretty difficult golf course with foggy and cool conditions, it made for some interesting play.  The final group leaders, John Rahm, Ryan Palmer and Rory McIlroy,  were  8 over par as a group through the first three holes playing zig zag with fairways.  Rahm looked like a 25 handicapper on the par 3, 3rd hole as he failed to extricate himself from missing the green and managed to skull a few chip sets before holing a 7 footer for double-bogey 5.  It was a pretty unusual day with foggy and cool conditions that impacted the length of tee shots.  Usually, in these types of conditions, the professionals can throw darts at pins as the greens are soft.  The South Course greens were anything but soft.  The greens were hard and fast running 13 on the stimp meter, which is US Open type caliber.  As a result of these conditions, many short putts were missed after some great approach shots to the green.  The par 4, 505 yard, 12th hole is the one of the most difficult holes on tour and was no different on this Sunday.  The par 5, 18th hole is usually a pivotal hole in the tournament.  In dryer, warmer conditions players will try to convert a lengthy tee shot into an eagle opportunity but the pond that guards the green has foiled more than a few attempts.  On this Sunday, players had to lay up to the 100-yard mark for the most part due to the clammy cold conditions.  The approach shot must be carefully considered because putting too much spin on a sand wedge can roll off the green and end up in the pond.

The final round was almost like watching a basketball tournament as there were so many players in contention that every tee shot, iron and putt seemed to matter.  Out of the pack came Marc Leishman who quickly took the lead after a birdie barrage on the first eight holes.  One contestant after the other tried to mount a charge to his lead but the Leishman racehorse could not be dashed.  Tiger couldn’t make putts on these tricky greens despite playing very well tee to green.  Brad Snedeker holed a 40 ft. for birdie but couldn’t convert another putt of 6 ft. to tie for the lead.  Rory McIlroy spun out of the round early dropping to 6 under and 5 shots back before roaring back with his own birdie fest to challenge Leishman but fell a bit short.  Rory would have become World No. 1 with a victory.  The quality of this field, the quality of the golf course and the weather conditions made the 2020 Farmer’s a memorable event.  It was also be remembered forever as the day we lost Kobe Bryant.

We’re profiling Jared Melman here this week.  Jared is a graduate of Bellarmine High School in San Jose and the University of New England.  Melman played golf at UNE and had a distinguished career on the team.  He turned in his desire to try to qualify for playing professional hockey to medicine.  He is now completing his medical school studies at Barrie University in Miami and has been selected to start residency at a leading institution in Virginia.  He spent last summer in internships at hospitals all over the country including Scripps in San Diego and Harvard and others–his academic standing is at the top of his graduating class.  Jared is a pretty good stick (thanks to years in junior hockey) and here he’s on the 18th hole of the Old Course at Half Moon Bay.

We took LMU Coach Jason D’Amore and his assistant Mike McCabe to Cordevalle on January 3.  Cordevalle has recently completed a complete redo of the greens in July and now the greens are in the best condition that they have ever been since the opening of the club some 20 years ago.

Conditions on January 3 were a bit challenging as it was pretty cool and the fairways were pretty soft taking away driver distance. Jason and Mike didn’t care a wit and striped the ball a country mile from the back tees of 7,517 yards.  I’m still in awe of the height and distance of their shots and they both shot par and/or 1 over. These guys are good!