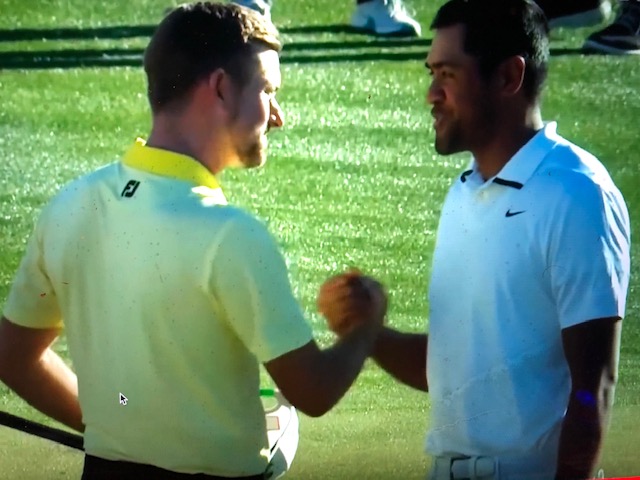 Webb Simpson emerged from the pack at the Phoenix Open and edged Tony Finau in a playoff.  It was another bitter pill for Finau who missed an 8 foot birdie putt on the 18th hole to seal his second PGA Tour Victory.  Instead Simpson came from behind and birdied 18 to tie Finau at 17 under par holing a 10 footer to birdie the first extra hole-the 18th.  Simpson seems to fly under the radar screen on the Tour and very few fans recognize how good a player he is.  This victory was Simpson’s 6th on the PGA Tour including a major at the U.S. Open at the Olympic Club in San Francisco in 2012.  Simpson is a grinder and has survived a few lapses in his putting stroke to come back and emerge as a very capable competitor on the PGA Tour.  Finau is having trouble closing out tournaments but I belief he will win many times on Tour.  Once he breaks through–I would look out–He is developing more than a few layers of scar tissue along the way.

The Phoenix Open is a wonderful event from a number of different perspectives.  It is a tournament for the fans-attendance is 200,000/day and it is a happening for golf fans and non golfers alike.  People come from all over for a good time with professional golf as the medium.  The best example of this notion is the par 3 16th hole which is essentially at atmosphere similar to the Roman Coliseum in the first century.  Attendance at this hole is approximately 17,000.  17,000 people are watching you hit a tee shot to the green.  If you miss the green, you will be treated almost as the Christians were eaten by the Lions.  Cast aside all golf etiquette–this is not Augusta National,  where you can hear a pin drop when someone is putting.  Here you will be booed, cheered with an entire entourage of extracurricular activities including caddie races, beach balls and probably some doses of alcohol throughout the stands.  It’s a carnival atmosphere. 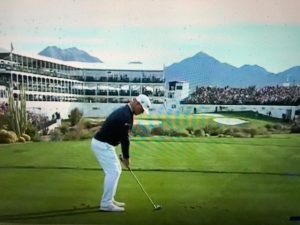 Gary Woodland in the Coliseum-16th hole

The TPC Scottsdale presents a wonderful test for the professional in conditions that are usually ideal.  The weather starts with coolness in the morning with temperatures rising nicely in the late morning and afternoon which fires up the fairways and the greens.  It is not necessarily a course for the big bombers to dominate.  It plays 7,300 yards with a number of strong par 4’s but a number of birdie holes due to the quickness of the fairways so it plays shorter than 7300 yards, which brings the entire field into the competition.    The course sports some significant risk/reward holes such as the par 5, 15th hole where many eagle attempts were available.  The 332 yd., par 4, 17th almost forces the professional to drive the green but has to be precise as any ball hit to the left will end up in the lake and some balls will clear the green and find the lake over the green.  The 18th hole is a great finishing hole of 442 yards with a bunch of menacing bunkers on the right side of the fairway.  In 2019, Rickie Fowler almost lost the tournament when his drive found the spinach in the middle of the bunkers on the left.  His shot out of that stuff was almost unbelievable as he nearly put it on the green and got up and down for par and victory.  The par 4, 11th hole at 472 yards is a bear with water on the left again all the way up the fairway and through the green and a lot of trouble on the right as well.  Many players end up on the right side of this fairway requiring some imagination to get to the green.  The last real tough hole on the course is the par 4, 490 yard where the tee shot has to be carved from right to left to give the professional a shot of 175-180 yards to a slightly elevated tricky green.  The shot is the same for the daily fee player who doesn’t hit it 310 yards as the next set of tees are at the 415 yard mark typically.  Another shot missed to the right or even on the right side of the fairway will lengthen the hole considerably.  I had a chuckle when Gary Woodlands only hit his tee shot 278 yards down the right side of the fairway.  Of course, he drew a five iron from 212 yards and knocked it on the green!  We don’t get to see much of the front nine on network television but there are plenty of interesting holes on the front side.  The nice part of the TPC is that the course presents a wide variety of holes that require a lot of thought in approaching them.  In my opinion, it is a great test for the lower handicap amateur player who has to think around this creative layout.

I feel a need to relate another ridiculous Bronson experience on the golf course.  For the last five years, we have spending Super Bowl Sundays on the golf course while everyone else heads for the parties and the pregame hype.  I have a bad attitude about this and I admit and equate Super Sunday to New Year’s Eve (another bah humbug holiday for me).  What’s even better is that you can play 18 holes in 3 holes and see most of the game anyway without any of the hype.

Well this Super Sunday was a surreal experience at the Dunes Course at Monterrey Peninsula Country Club (MPCC) with winds gusting at 50MPH or more with temperatures in the low 50’s or lower.  The winds were cold and it felt like the low 30’s despite the brilliant sunshine.  Play started out okay but by the 9th hole as we approached the ocean, play became unplayable.  The 9th hole is a par 5, 490 yard hole and the sequence here was driver, 3 wood, 3 wood and 4 iron from 111 yards to make a bogey that felt like a birdie.  The closer we got to the ocean (no. 10 through 14), the worse conditions became.  It was difficult keeping the ball on the tee and hitting anything high in the air was a waste of time–it was 4 iron after 4 iron.  The best one was the 14th, par 3 right on the ocean playing downwind.  The prevailing wind on 14 is right to left–ocean to shore–only on this day, the prevailing wind was 50 MPH!  I knew it would be impossible to hit the green if I aimed anywhere near it.  You had to have the courage to aim the tee shot 30-40 yards into the Pacific Ocean.  I usually hit a 7 wood to carry the rocks at 175 yards.  Today, I said a little prayer, took out an 8 iron and aimed the shot right into the Pacific Ocean (it’s only a ball), the ball flew out towards the ocean high and true and the wind blew it 50 yards to the left as it crossed the middle of the green and landed on the front edge some 30 feet from the pin-ridiculous and lucky for sure… 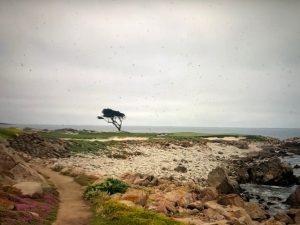 14th from the back tee

By the time, we finished I was frozen and sat by the fire in the restaurant with my Gortex jacket on for the next few hours until the Niners were rendered toast with a little over a minute to play.

Description of the TPC Course