The Passing of Don Larsen and The Sentry Championship 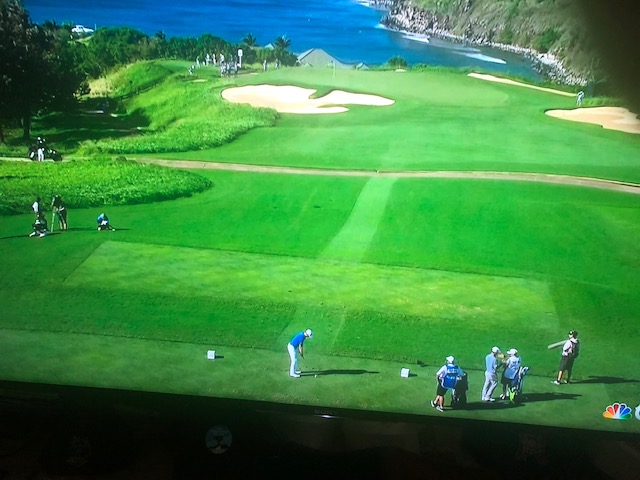 Justin Thomas won the Champions Club Tournament in a 3-way playoff with Patrick Reed and Xander Schauffele.  It was another disappointment for Schauffele who led through the third round and looked like he had victory in sight. 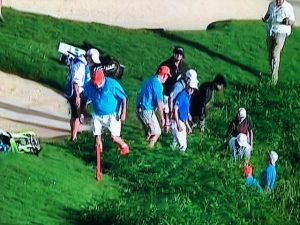 Thomas who led down the stretch in the final round opened the door for Schauffele with an erratic drive on the 18th hole.  Battling the vegetation and losing a ball as well, he missed a 9 footer for par and open the door for Schauffele.  Schauffele needed a birdie to win the tournament and managed to be one of the few players to reach the 650 yard, par 5 in two shots, but he could not convert two putts missing a 7 footer to force a playoff.  Thomas prevailed on the third extra hole for a gut-wrenching victory–he actually felt like a survivor rather than a winner.

The Plantation Course at Kapalua showed well this year.  The pros usually blister this course with a barrage of birdies with the leaders at 20 under par or more.  Designers Bill Coore and Ben Crenshaw (Bandon Trails and Sand Hills) went back and took a fresh look at the course.  The course was designed to be firm and fast but over the years through climate change, the turf became soft enabling the pros to “tear it apart.” However, the daily fee player couldn’t handle the length of the course because there was little bounce and roll.

11th hole at Kapalua-Justin Thomas on the tee

The course layout itself was not changed radically and the effort was labeled a “refinement” rather than a redesign.  The fairways were re-laid and the feel of bounce and roll was restored with some twists in layout that required improved shotmaking from the professionals.

A good example of the changes was the par 5, 18th hole of 650 yards.  In prior years, the professionals would usually be reaching this green in two taking the teeth out of the 72nd hole of the tournament.  The resurfacing and revised layout of the fairway prevented the usual 375-400 yard drives and very few opportunities for eagle 3 were available in this tournament.

The Passing of Don Larsen

It was a bright, sunny day in New York on October 8, 1956.  It was also Game 5 of the World Series between the Brooklyn Dodgers and the New York Yankees.  Yankees manager, Casey Stengel handed the ball to Don Larsen – an unlikely occurrence on such an important stage.

I was 8 years old in 1956 and during those years the World Series games were always played during the day.  This presented a big problem for me since the game would start about 1 PM, which meant that I would still be sitting in my third-grade class avoiding the demands of Sister Farina who would box my ears if my eyes even strayed out the window.  As a lifelong Yankee fan-probably from the age of reason at age 7, I learned very early in life to hate the Brooklyn “bums.”  This was a big game and somehow I had to see it.  Both of my parents worked and we lived on the second floor of a house that was owned by my grandparents.  My grandparents lived on the first floor.  I figured out that the way that I was going to see this game on our black and white television was to get sick the night before the game.  I had great credibility in the school attendance rankings (no sick days off in the past two years) as I actually liked school and had very few bouts of illness other than chickenpox and measles which I had in the first grade.

On that Wednesday, I woke and told my mother that I felt very sick to my stomach and couldn’t go to school…she took my temperature and started to become suspicious but she didn’t follow baseball and my dad had to leave early for work so I didn’t have to deal with his potential suspicions.  He knew that I loved the Yankees and he was also a fan but not like me.  I managed to persuade my mother that I would stay in her bed, which of course, faced the TV and rest through this “illness.”  Reluctantly she agreed and headed off to work–I told her I was too sick to have meals with my grandfather and fortunately, I seem to remember that he had some errands to run that day.  And there it was–game 5 of the 1956 World Series-Dodgers vs. Yankees–Yankee broadcasters Mel Allen and Red Barber–Sal Maglie (the barber) vs. Don Larsen, which would be the greatest baseball game I have ever seen.

It was well known that Larsen was an unremarkable commodity but he was coming off his best season in 1956 with a record of 11-5.  He had changed his delivery to a no windup delivery for the first time in his career.  The big surprise was that Stengel gave him the ball at all for Game 5 after he had been roughed up and dispatched in Game 2 when he got knocked out.  Larsen didn’t even know he was starting until he found a baseball in his shoe when he arrived at the ballpark which is how Stengel told his pitchers who would be the starting pitcher.  On this day, Larsen had impeccable control as he kept getting ahead of the hitters early in the count getting batters to hit his pitches.  There were a number of close plays and minor miracles as baseball has always been a game of inches.  The play most remembered was a line drive hit by Gil Hodges that Mickey Mantle snared in the fifth inning.  Another groundball ricocheted off the glove of third baseman Andy Carey only to be picked up by shortstop Gil McDougald to throw out the ageless Jackie Robinson by a hair.  Robinson beats that throw a few years earlier in his brilliant career.  Larsen kept mowing the Dodgers down one by one, strike by strike, put out by put out. Between innings In the dugout, no one is talking to Larsen-not Yogi, not Stengel, not anybody.  The Dodgers, Sal Maglie, was nearly as perfect but Mantle’s home run for the Yankees second run seemed to loom large.  Larsen’s no windup delivery seems captivating but, in baseball, anything can happen at any time.  It seemed that the Dodgers were going to figure it out as the game moved to the eighth inning but Larsen kept throwing strikes and getting people out.

The ninth inning would be a real “nail-biter.” The Dodgers would be sending up Carl Furillo, Roy Campanella and a pinch hitter to hit for Maglie who had pitched a fabulous game giving up only five hits.  These guys were tough but Furillo flied out weakly to right field-even I could have caught that one.  Campanella grounded out to second baseman, Billy Martin for the second out. ONE MORE OUT for history! Journeyman, Dale Mitchell, a very good pinch hitter comes to the plate and he needs to try to get on base.  64,000 fans in Yankee Stadium were breathless as Mitchell tried but Larsen kept throwing strikes running the count to 1-2 and then veteran umpire Babe Panelli calls strike 3 and the miracle has been accomplished.  Mitchell protests the call but it’s over and Yogi jumps into Larsen’s arms in a classic scene that has been rebroadcast a million times.  I could watch it a million days and still feel the same way.  It is the best performance in a game in World Series history-bar none.

Larsen passed away this past weekend but his legacy will live forever.  It’s been 63 years and no one has ever come close to accomplishing a perfect game in the World Series and I doubt anyone ever will-especially in the modern era of baseball of 100 pitches and multiple special-purpose relief pitching.  It was also the last time I ever played hooky from school.