Most people would comment that golf is a social game.to be played by four players (foursomes) with all sorts of games of gambling to experience the competitive spirit and camaradie that occurs with playing the game.  While I would agree that this scenario  is the primary format for the game, there is something about playing the game alone that presents other perspectives.  I don’t think it’s preferable to play golf by yourself but I believe the experience has some positive attributes of the game.  Golf is actually a cerebral activity in the context of a physical activity that can be best be categorized and complicated a number of physical attributes.  Golf requires all parts of the body to be in sync controlled by the brain functions with the added psyche analysis of various emotions such as confidence, control, emotions and muscle control etc.  There is no standard when it comes to golf technique.  There is a complicated universe of swings that work and swings that don’t work.  There are literally thousands perhaps millions of ideas and nuances as to how to develop a golf swing.  There are millions of commercial products, gadgets, books and articles by any number of pundits that possess the magic elixir of the golf swing.

Playing golf alone is an interesting experience.  You miss the social aspects of the game and some players look at you strangely as if you’re either a terrible player or a rogue personality that can’t get anyone to play with them.  When you play alone, the cadence of play is different as you play at your own pace without being effected by the nuances and habits of playing partners.  The cadence is important since usually you’re trying to find tune a swing or try a few different shots and not have to spend a lot of time thinking about them.  There is also an ethereal part of the experience where you become more aware of the weather and circumstances around you.  Weather conditions such as wind, fog, sunshine, heat and even moderate rain create additional variants that you pay more attention to when you’re playing alone.

The lure of the game of golf is that it is a game that really can’t be mastered.  No matter what level or handicap that the player possesses, the pursuit of improvement is the pursuit of the Holy Grail.   I’ve often wondered why the weakest parts of my game tend to shine when I play alone. It’s a bit mind-boggling because you want to replicate this capability in your normal four-ball game or a competition but it seems difficult.  The concept of muscle memory and the step and repeat function just don’t connect for me.  I suspect it’s the basic skills of my swing and technique that continue to variate as the years go by with the constant hope for improvement.  I often compare my golf game to my basketball playing days where I never thought about my jump shot or free throw technique–I expected everything to go in and it’s the same at age 70 as it was at 16 (except for height of my vertical jump).  I always wonder why I golf doesn’t produce the same result as basketball–I suspect there’s much more variation in golf.   After playing alone, you always find something to take away from the experience-perhaps a better shoulder turn, flatter swing plane, better putting stroke.  Unfortunately, the next time you go out to play with your group, none of these things tend to stick.

Playing alone also means that there are no witnesses to anything great or special that happens in your solitary round.  A few years ago there was a USGA ad when a young lad is walking, carrying his bag and playing alone and hits his tee shot.  The ball bounces once on the green and runs right into the cup for a hole-in-one.  The kid grabs his bag and starts running towards the hole, the ball is in the hole but he looks up and there is no one around.  He knows that this wonderful shot will not count as a hole-in-one.  In the still of a setting sun, -a guy nearby (unseen from the tee) on a farm tractor–yells out, “Nice Shot, Kid.”  My similiar experience did not turn out.  Unfortunately, I had the same experience without the tractor guy.  On the 8th hole at Almaden Country Club, I holed a 190 yard, 7 wood tee shot for a hole-in-hole.  The ball hit the middle of the No. 8 on the flagstick and simply dropped in but it doesn’t count.  No witnesses–I looked around for anyone in the back yards of the adjoining homes on the hole but no one was there.  It simply doesn’t count. 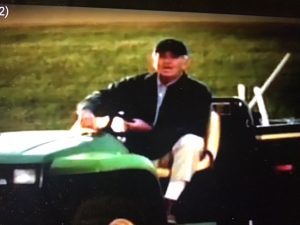 Another great aspect of playing alone is the ability to just focus on one shot at a time and the objective of that shot without concern about score.  The ability to experiment with clubs and yardages is another element of playing alone, which gives the player additional ideas of how to play certain shots.  Professionals use these techniques for tournament preparation by playing alone and learning the course they are about to compete on.

Playing alone is really a unique experience of just concentrating on golf and is actually therapeutic.  It is my personal yoga class where I tune out the rest of my careabouts and worries and just hit a shot with the best stuff I have in the bag.  I personally recommend it occasionally to reinforce how great the game really is at its basic level.