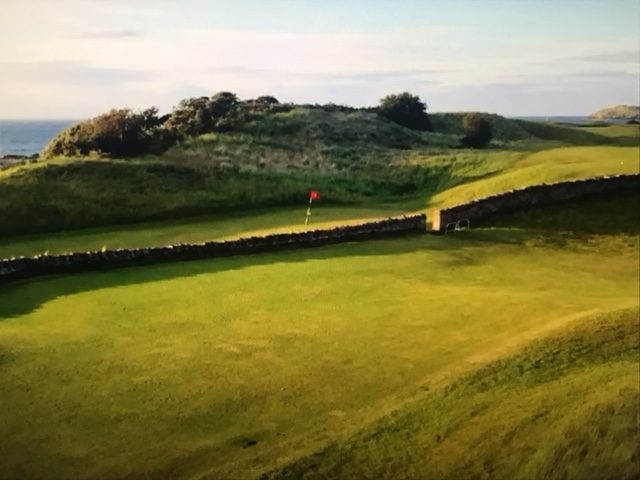 North Berwick is a tidy seaside town in East Lothian, Scotland situated on the south shore of the Firth of Forth right on the coast.  The quaint village, appointed homes and the comfortable hotels reminds me of Carmel, California.  North Berwick is known for being a place where the aristocracy of Edinburgh either come to vacation or have a second home.  North Berwick has direct, convenient rail service from Edinburgh.    While the rest of the world was roasting, our visit to North Berwick was a bit warmer than normal for the locals but very comfortable compared to the roasting that was occurring throughout Europe as London recorded its higher temperature in recorded history at 104 degrees. 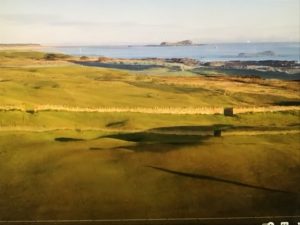 The par 4, 3rd with the wall to cover from the fairway

North Berwick is a relatively unknown gem to the American golfer as the course has never hosted an Open Championship.  The course is unique and reminds me of a number of different venues unrelated to the links golf course.  The first hole evokes a thought of the first hole at St. Andrews for the generous fairway and the Firth of Forth on the right side of the green so any slice here will be out of bounds.  I believe North Berwick is very interesting for the variety offered by all of the holes and each hole seems to be special in its own way.  After the short part four first hole, the second hole is a 433 yard par 4 with the beach in play all down the right side of the hole.  Fortunately, the front nine was downwind for us, so this hole played considerably shorter and the beach was avoided.  The third hole presents a wall cutting across the fairway. 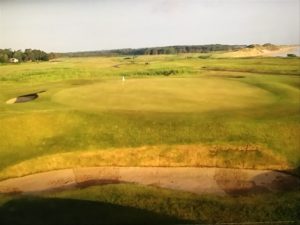 The par 3, 6th hole with the Quarry bunker

After a tee shot down the middle of the fairway, my three wood was too low and careened off the wall with a dull thud leaving me with a 170 yard five iron which turned into a pretty decent two putt bogey.  The first par 3 is 177 yards and thanks to downwind, we were able to play away from the bunkers. The sixth hole, Quarry, has a huge bunker guarding the front of the green and has to be avoided.  The 7th hole is a 366 yard, par 4, Eli Burn, which presents the first burn on the course with three deep bunkers guarding the green.  We closed the front nine with two challenging par 5’s including, no. 8, Linkhouse, with 11 bunkers on the hole.  Playing the front nine downwind was a pleasurable experience and you felt that if you made good swings, you would get good results and avoid most, if not all, of the bunkers.  The back nine would be against the wind and the grind would commence on number 10.

As we turned for the home nine holes, the wind picked up and the grind was on.  The course was clearly going to be more difficult as wind started changing in different directions-sometimes against and sometimes cross from the ocean/inland-right to left.  Tee shots had to be aimed toward the rough and the sea in order to make the fairway as any shot down the middle would end up in the right hand rough or worse.  The 10th hole (Eastward Ho) is a 172 yard, par 3 reasonably straightforward but you had to play away from the bunkers.  The 11th hole, Bos N Lockers, is a 549 yard, par 5 that played 650 yards on this day with another huge bunker on the right side of the fairway.

It just seemed that things were getting more difficult as we approached the 12th with the wind picking up in intensity.  The fun isn’t really supposed to start until the 13th hole so this 402 yard, par 4-12th is a dogleg left with four bunkers on the left and a bunch of gnarly rough.  I wasn’t going to hit many greens in this situation so the idea was to keep it in the fairway and hit that war torn gap wedge 65 yards every time.  The gap wedge would serve me well for the holes to come.  The 13th hole (Pit) was my favorite on the course-its 400 yards in length and the smallish  green is guarded 50 yards out by a wall.  My playing partners all ended up carrying the green and going over to some very difficult downhill chip ships through the rough.  My 65 gap wedge came through again as I hit my third shot over the wall to eight feet where I holed the putt for a very satisfying par. 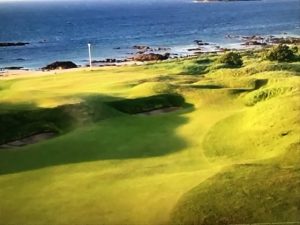 The 14th hole from the middle of the fairway

The 14th (Perfection) hole of 375 yards requires its namesake (Perfection) as the wind howled here and the hole played at least 450 yards.  The shots on this hole are completely blind and your aim is the directional pole that actually sits beyond the green above the beach where you will end up if you get near that pole position.  There are significant cross bunkers on the right which instantly reminded me of the huge bunker at No. 4 at Royal St. Georges.  You simply had to carry these bunkers or ……..The 15th hole (Redan) played as a 190 yard par 3.

The Redan is a French military term for fortification as a U shaped embankment toward the expected point of attack.  I don’t know much about military strategy but this hole was well fortified with horrendous bunkers especially in the front of the green.  There was no way that my ball flight with a hybrid or three wood was going to carry those bunkers in this wind.  I decided to hit driver and let the wind do whatever it decides to do as I wanted to avoid the bunkers.  The strategy worked but my drive slipped off the green far right as I was unable to get up and down for par but a bogey evoked a sign of relief–anything in those bunkers would have been a scorecard killer.

We then proceeded to the famous 16th hole (Gate).  Members and patrons of North Berwick say that Gate is a hole that you will love or hate.  I would say hate is the appropriate term and although I love this golf course, it will be a new entry on my list of one of worst golf holes of all time.  The tee shot is interesting as you have to cross a burn similar to the 17th at Carnoustie but this burn was about 205 yards out against the wind.  This tee would test my limitations so I decided to hit it in front of the burn which was no problem due to the wind and hit a decent shot to position myself for another gap wedge.  Mission accomplished but the gap wedge failed to hold the green and peeled off like a banana peel to a horrible position of chipping uphill–it is the extreme version of Pinehurst No. 2 and the green is immense–3 putts and a double bogey had me shaking my head and immediately made my “worst” list.  I don’t think the rest of the players in the group fared any better.

Overhead view of the 16th hole

The 16th is a hole you could play every day and maybe never make par–it needs to be blown up.  The last chapter  of the punishment would occur on the 17th, another long par four dotted with bunkers and trouble but we were now down on the other side of difficulty for the course.  I absolutely loved the 18th hole (Home) as it bears a strong resemblance to the 18th hole at St. Andrews.  An absolutely wide fairway that leads to the clubhouse of only 277 yards.  I should have had a birdie as this time, my 50 yard gap wedge came to 8 feet and I missed the birdie putt but ended a glorious round on this gem with a par.  It was a great feeling and the end of a perfect day on the links.