The gods of golf are smiling!  Will Zalatoris broke through at the FedEx St. Jude Championship on Sunday with a dramatic playoff victory over Sepp Straka.  Zalatoris has been “knocking on the victory door” for quite some time with outstanding high finishes in a number of events including majors.  It seems that at every critical juncture of the final round, Zalatoris’ putter would become balky and he didn’t convert the critical putts to putt him over the top. 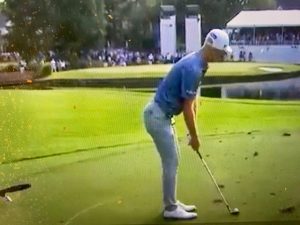 On Sunday, Zalatoris’ played well but he was being chased at the top of the leaderboard as the round ebbed and flowed.  Sepp Straka would catch Zalatoris and the event would come down to the final holes.  The gods of golf started to dictate things at the 16th hole when Zalatoris drove the ball into the trees on the right of the fairway only for the ball to bounce back off a tree into the middle of the fairway.  That result would be a good omen for what was to come.  Despite some dazzling iron play, the putter would have to have to be the club that he would have to execute to secure this victory.  It happened on the 18th hole, when he again missed the fairway and had to chip his 3rd shot to 8 feet.  These are the putts he was missing in prior weeks that were depriving him of victory.  This one would go in and Straka would match his par to force a playoff.

The “gods” would be needed again.  On the second playoff hole, Zalatoris hit another wayward drive but converted a 12 ft. putt to hang in there and tie Straka.  The third playoff hole (the 11th) is a par 3 over the water with a menacing bunker through the green.  Zalatoris knew that his shot was headed for trouble-it cleared the hazard by a smidge but took a few bounces backward and settled into a crevice between the hazard wall and the rough.  On almost any other golf course or hole, that ball would have proceeded to end up in the hazard.  Zalatoris would have an incredibly difficult shot to get close to the hole from that position.  Straka then took the tee and all he needed to do was to put the ball anywhere on the green where a par was secure.  However, the gods of golf decided that this would not be Sepp’s time.  His tee shot took similar bounces over the water but his shot ended up in the water.  Zalatoris now had a decision to make as bogey might win the tournament.  He made a courageous decision in my opinion to go back to the drop zone and try to get up and down for bogey knowing that Straka would have to do the same thing.  The shot from the crevice could have squirted and gone anywhere and it’s not a shot that I have ever seen a PGA professional hit.  Zalatoris went back to the drop zone and calmly dumped his approach about 10 ft. from the hole.  Straka then did the unthinkable-with probably too much adrenalin floating in his system, Straka proceeded to knock the ball in the back bunker from the drop zone.  He would have to hole the bunker shot to make bogey.  Zalatoris now faced the moment he’s been preparing for in his career as a golfer.  The putter that had denied him was now in position to make him successful–the “gods” gave him the thumbs up and he calmly sank the putt for his first victory and head into first place in the race for the Fed Ex cup.  An exciting and improbable finish with a nice result.

Zalatoris played well all week and perhaps he played even better tee to green in the majors.  Short putting–10 ft. or less cost him dearly in those events and he had a few misses in the preceding rounds of this event.  However, the putter came through when it was required and his chipping also proved to be instrumental in securing his first PGA Tour victory.