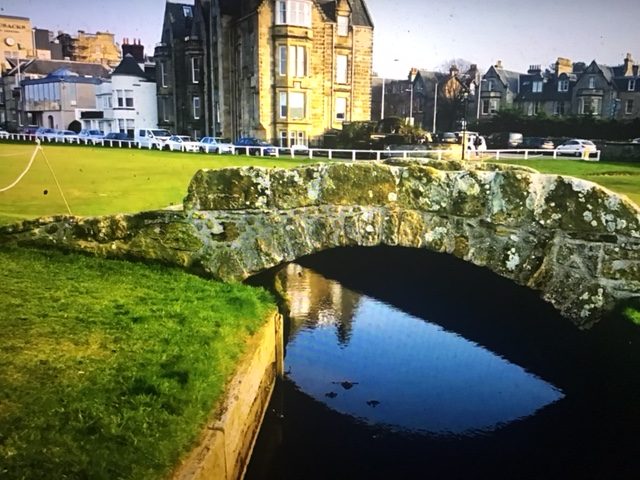 In the third week of July, there was one place that was the best location on the planet-St. Andrews, Scotland, home of the 150th Open Championship.  Sure it’s golf, that boring sport where guys knock a small sphere around a layout of ground, pocked up with big sand holes, thick gorse bushes and some might argue that the Old Course’s best purpose is on Sunday when it functions as a public park.  However, irrespective as you might feel about professional golf, the town of St. Andrews stands as a beacon in this week while the rest of the world is predominantly a big mess.  The UK just tossed Prime Minister Boris Johnson to the curb in a major character blow-up in Parliament.  There are strikes all over Europe and the UK, hampering transportation all over the region.  We had the Japanese Prime Minister assassinated and the US continues its dysfunctional behavior.  The planet is generally hotter than hell but at St. Andrews it is a comfortable 70 degrees.  The town was well prepared to expect an avalanche of patrons from all over the world as it simply does it best to accommodate their guests with the usual aplomb and good will.    Over 300,000 tickets were sold to the Open Championship and it just seems that the people of St. Andrews just shrug it off and welcome everyone.

There was considerable anticipation for this event with Rory McIlroy playing well as the home favorite as well as the arrival of Tiger Woods.  Tiger was mentally and physically prepared for the event and had skipped the US Open to prepare his body as  St. Andrew’s is the flattest course you could expect for any major championship.  The gods of golf decided that this stage would not belong to Tiger.  His first tee shot landed in a sand filled divot in the middle of the first fairway.  This horrible break resulted in an iron shot that landed in the Swilcan burn, the approach shot was close enough but the putt was missed for an opening double bogey that dictated his fate  for the next two days as Tiger could not generate momentum for the remainder of the event.  He would miss the cut.  Conditions were firm and fast fairways,  sun dried yellow rough aiming at some treacherous pins provided by the R&A.   The players simply had to avoid as many of the 111 bunkers dotting the brown terrain.  Players simply “went for it” swinging as hard as possible to get as far as possible down the fairway.  The rough was wispy and in the majority of cases, pretty easy to get out of without penalty as there was no appreciable rain during the week to turn any of this rough to green and gnarly.  I played throughout Scotland during the week and found little difficulty in the rough.  The biggest factor impacting these players was the speed and size of the greens and the pin placements on these greens.  If you watch the PGA Tour with any regularity, it is very unusual to see a professional leave a putt short of the hole.  This week, players were consistently putting short of the hole and with the size of the greens, the number of putts per round were way up.  There are no events on the PGA Tour where players have putts of 100 ft. or more.  On Saturday, Bryson DeChambeau four putted the 16th green as his approach shot to the green ended up directly behind  the flag on the 2nd green.  The flag was directly in DeChambeau’s line and rules officials had to be consulted as to whether the flag could be pulled and it was eventually removed–but no matter, he four putted anyway.

Cameron Smith won this championship with his putter.  His final round of 64 was a final round scoring record.  The putts made to take the lead in the middle of the round and his putts on 17 and 18 were quite remarkable.  Unless you’ve played the Old Course, you cannot begin to understand the difficulty of both of those putts.  Smith’s two putt for par on 17 had to straddle the Road Hole bunker and the slightest miss offline to the left could have produced a catastrophic result.  Then he holed the six footer for the par to maintain his lead.  Many players have been able to execute one of these plays but most miss the putt for par.  It feels like fumbling the football at the goal line. As usual, the Road Hole claimed a number of victims throughout the event with a stroke average of 4.6.    On 18, Smith knew he would have  to make birdie to win. Cameron Young was certainly going to make birdie and then he holed his putt for an eagle to draw even with Smith.  Smith calmly hit his approach putt on the green just the right line to ensure the birdie and force McIlroy to try to make eagle to tie him.  Just as on 17, the approach had to be precise on the right line as any abrupt movement to the left could have produced a shot into the Valley of Sin.  In the third round, Smith had a moment where his judgment cost him and could have been disastrous.   On the 13th hole, Smith’s drive off the 13th hole landed in what could have been an unplayable lie.  After surveying the shot for a while, he decided to blast it out of the bush-the lie was pretty horrible and the risk pretty high.  He took a mighty swipe at it and was only able to advance it about 40 yards, he ended there with a double bogey enroute to a 3rd round of 73 and would start his final round 3 shots behind.  My sensation is that this adventure at 13 strengthened his resolve and focus as he entered the final round.  He was also buoyed by the play of Cameron Young who was playing as well as he was and the Cam Combo produced the electric atmosphere leading to Smith’s victory.

Rory McIlroy played great tee to green throughout the entire four days but key putts  on the back nine were denied by the gods of golf as they continued to kiss the cup or miss by less than 1/2 a ball.  The anticipation of McIlroy winning was infectious as the crowd was ready to explode and blow the top off of the Old Course Hotel.  It was not to be but McIlroy played extremely well and was bogey free in the final round–it was a few putts too many.  His putt on for birdie on the Road Hole was the critical miss of the tournament as it stopped at the hole to deny him the chance to tie Smith. Cameron Young gave it quite a run with a first round 65 and kept the pressure on throughout the week.  He is enormously long off the tee and his final round paired with Smith was virtually shot for shot.  Victor Hovald played well all week but a few misses found himself in some horrible places including the pot bunkers where he had to play sideways or backwards on some of the holes.  Like McIlroy on Sunday, he didn’t really convert any putts that would keep him in contention but he had a solid week.  His play on the PGA Tour all year is a clear indicator that he is going to hoist the Claret Jug some day.  There were some other disappointing performances.  Defending champion Colin Morakawa could not stay on top of his game as he seemed a bit tentative with his irons and was out of position on too many holes as he missed the cut by two shots.  Morakawa is trying to find his game at this point of time and I’m sure he’ll be redoubling his efforts to get the control he exhibited in his prior major championship victories.

It was quite an event and well organized.  Huge crowds behaved well and respectfully throughout and the weather was as cooperative as the locals.  On Monday, the Old Course was being tested again by the daily fee player amongst the empty grandstands that toasted Cam Smith’s victory only a few hours earlier.

← Schauffele Wins the Scottish Open-Focus on the Open Championship at St. Andrews