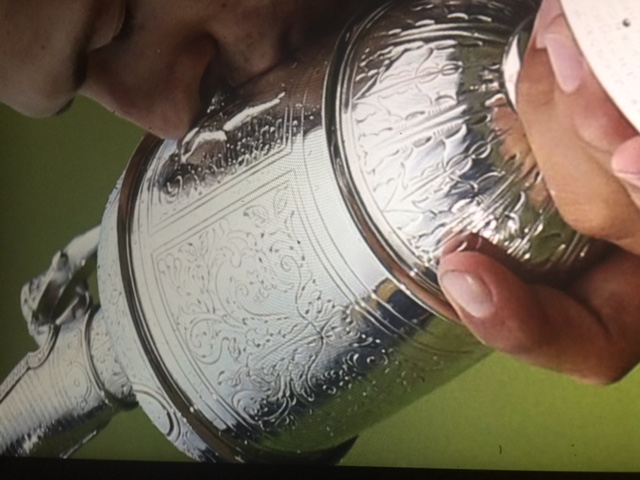 We thought that the 2016 Open Championship was the best in history with Henrik Stenson and Phil Mickelsen in a 18 hole competition that lapped the field at Royal Troon.  Stenson came out on top in a thrilling finish.  It was perceived that the 2016 event could not be surpassed in drama and competitiveness.  Well, it just so happened that the 2017 event may have one-upped the 2016 event.  Jordan Speith held the lead or was tied for the lead for the first 66 holes but he and Matt Kuchar were locked in combat at 8 under par as they approached the tough 13th hole.  What happened next was pretty incredulous.  Speith hit his tee at least 100 yards offline in deep rough which is the one place on the hole you just cannot be.  After spending some time looking for the ball, the position was an unplayable lie and negotiations began as to where the drop could take place.  The decision on the drop seemed to take forever and had to be mentally distracting to Kuchar who was properly positioned in the fairway.  After almost 25 minutes, Speith hit his third shot from the driving range and he didn’t like it–it looked like it wasn’t going to carry the rough on the right side.  Now, Speith faced a very difficult chip shot (his 4th shot), the shot had to be close to give him the opportunity to only lose one shot to par.  He hit a terrific shot, bounding over the mound, and stopping about 8 ft from the hole.  He had to make this one to avoid getting down by 2 shots to Kuchar who made par.  I’m sure Speith will have a lot to say about this experience since this hole could have gone very wrong and he could have made a very big number.  Memories of the blowup at the 12th hole at Augusta could creep in and impact his psyche.  Was this the place where he was going to lose the Open Championship?  At this point in golf and in  most competitions, the game speeds up rapidly often enveloping the player’s skills to the point of rank amateur and usually bad things can happen and often do happen.  I can’t speak for Speith but I believe he probably put on the brakes and tossed away the memory of the 12th hole at Augusta while he contemplated that chip shot on 13.  He went back and forth with his caddie Michael Greller to wipe off the club and slow things down.  That chip shot and the putt that followed was the key to winning the championship although it was for a bogey 5.  It certainly could have been a lot worse.   He was now one shot behind in a tournament he had led from the start to this point.  Instead of being downcast, his miraculous bogey on the 13th seemed to boost his confidence leading to the significant barrage of shots that followed.  His tee shot on the par 3 14th almost went in and he had an easy birdie putt to get back into a tie for the lead.  He then proceeded to eagle the 15th hole with a spectacular putt from 30 ft.  Kuchar seemed to know that this train was coming and that there was nothing he could do about it.  He played extremely well and within himself trying as best he could to keep up with Speith’s uncanny shotmaking and putting as they headed for home.  Speith just poured it on with his putter and all he had to do was to avoid another tee shot like the 13th.  On the 18th hole, a 470 yard, par 4, he laced an iron 250 yards right down the middle and followed it with another iron onto the green carrying over 220 yards.  Two putts down and it was over for Speith’s 3rd major championship placing him in elite company with Jack Nicklaus with 3 majors at the age of 24 and 1 more than Tiger Woods.  I don’t think anyone has ever seen a player roar back to go 5 under over the last 6 holes in a major championship.  Speith’s caddie, Michael Greller, deserves a lot of credit for sticking with his man and keeping his spirits up in some pretty tough moments on the 13th hole.  The focus required to maintain concentration and the “eye on the prize” was quite remarkable.  I haven’t seen this type of mental toughness since Tiger Woods who seemed to be able to “will” himself to victory with an assortment of creative shots.  A series of tweets from Jack Nicklaus, Tiger Woods and Zach Johnson reiterated the idea that Speith’s determination and execution was an extraordinary event.

It was quite a special Open Championship with a lot of good feelings all around as the field played very well on a course that was meticulously prepared and more than worthy of this major championship.  Matt Kuchar never backed down and played as hard as he could to catch Speith but it just wasn’t to be.  The venue at Royal Birkdale also set an attendance record.

Its onto to Carnoustie for the 2018 event–it will be hard to match the drama and play of the last two years.