Open Championship-Rain and Shine and Grace 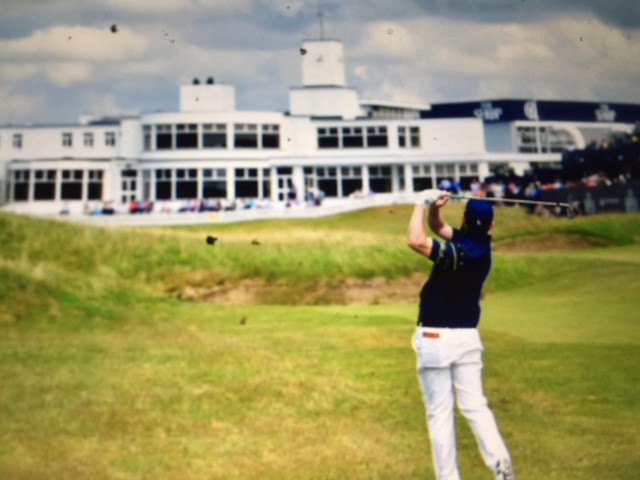 The 146th Open Championship at Royal Birkdale is shaping up to be an another exciting conclusion.  Last year, Phil Mikelsen and Henrik Stenson turned the Final Round in a two man mano a mano event with both players playing brilliantly with Stenson making a few more putts and winning the Claret Jug.  This year Stenson is 7th at 3 under par with Mikelsen missing the cut and on his way home.  Friday and Saturday were two different weather days as scores ballooned on Friday with rain and wind challenging the mettle of these players.  On Saturday, the sun came out, the wind was virtually nil and the players attacked the course and the scores came down. Branden Grace shot 62 to set a record for the lowest score ever in an 18 hole round in the 157 -year history of championship golf in a major.  Grace played a perfect round and added a bunch of birdie putts on the back nine to card 33 after shooting 29 on the front.  Grace was in contention at Chambers Bay in the 2015 US Open that was eventually won by Jordan Speith.  Grace may a bit too far back at 4 under but this day belonged to him.

Speith is the leader at 11 under and looks like a master craftsman at Birkdale as if painting a picture.  He now has 3 rounds in the 60’s and is in great shape to add the Claret Jug to his impressive resume.  He is so sneaky long that it really seems hard to fathom.  His drive on the par 4, 470 yard, 18th hole carried over 335 yards.  His approach shot with a pitching wedge was almost a “mis-hit” for him and just carried the bunker.  He then proceeded to hole a very improbable putt for birdie to extend his lead to 3 strokes over Matt Kuchar.  “Kuch” hit a terrific iron shot to that green from 180 yards out to 6 ft. but couldn’t convert the putt.  What looked like a two shot swing in Kuchar’s favor ended with Speith getting the two shot swing.

The great story of this event is the play of Austin Connelly.  Connelly is 20 years and weighs all of 150 pounds and hits the ball a mile.  He qualified for the Open by winning a playoff at Royal Cinque-Ports by sinking a 15 ft. putt.    My adventure at Royal Cinque-Ports is covered in Golf Chronicles (I’m glad they allowed him to play there).  Born in Texas, he plays on the European Tour and is currently ranked 167th.   My sensation is that he will have a difficult time on Sunday knowing what is at stake but in golf-one never knows.  He is 6 shots behind his friend Speith.

Brooke Koepka has the stuff to make it two majors in a row on Sunday.  He is playing with confidence after his US Open victory and has all the tools to make a serious run on Sunday.  I still believe that Speith will think his way through on Sunday to claim the Claret Jug.

This Open has been a spectacular display for Royal Birkdale and I’m sure their members are quite pleased.  Today, the course measured only 7,030 yards and the conditions gave the players the opportunity to demonstrate their spectacular skills.  The winner will have to continue to avoid the fairway bunkers and green side bunker play will be critical to victory.

A final plug for NBC which is doing an outstanding covering the event.  Johnny Miller said it best-he is very impressed with Speith’s putting, irons and course management. He stated that Speith might be vulnerable with an errant tee shot but then caught himself and said, “He hit some really great drives on the back nine.”