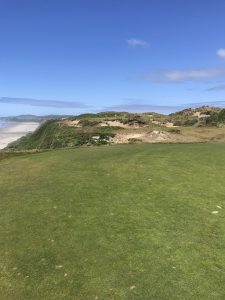 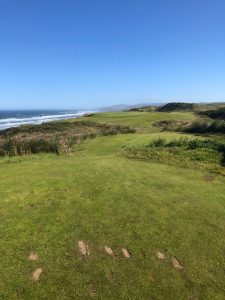 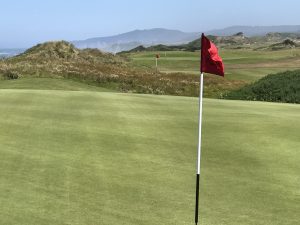 Avid golfers play a lot of competitive golf and all of us play in a number of charity golf tournaments or club tournaments that are very competitive.  I decided to cover my experience at the Bandon Dunes Links Championship in Oregon this past week.

The event is little different from any other competition as the players were flighted to skill level which is always the way it’s done.  The competitive was a best-ball of two man teams over 72 holes.  There were three distinguishing elements to this event which is why I decided to write this blog:

As in any competitive event, there were a number of very good players in the tournament but all of us would be tested due to the strength of the wind.  Balls on the green had to be marked carefully and putting was really impacted by the direction of the wind especially putting against the wind.

I approached the event with some trepidation as walking 72 holes in the wake of recent back troubles this year  We arrived on Sunday in the early afternoon and decided to play the 13 hole, par 3 course called the Preserve.  We made a bunch of putts and were close to even par 39 for the round and played it in less than 2 hours.  We were psyched because our first course to play would be Old MacDonald where the greens are so large that it is very possible to 4 putt them.  Our optimism faded quickly as we birdied the first hole with a close chip shot but I missed a 4 foot birdie on the second hole for a disappointing par.  The rest of the round and the tournament was characterized by very few putts made but we played extremely well tee to green in the horrendous winds.

The best example of the wind for me was the final round at Bandon Trails.  Our caddies were terrific and during the final round, my caddy pulled the club out of the bag and said to me, “Hit this.”  There was no discussion or decisions made—I just took the club and tried to follow his instruction.  The 18th hole at Bandon Trails is a 417 yard, par 4 and the wind was blowing 40 mph directly against us.  I pounded a driver right down the middle–it went all of 175 yards.  I then blasted a 3 wood right down the middle a grand total of 150 yards.  As I hit the three wood, my cap fell off my head and was 50 yards from me down the fairway while I was hitting the shot!  I had 93 yards to the green and the caddy handed me a 6 iron for my approach shot–a six iron!  I was almost embarasssed but I followed the practice of obedience and hit the shot hard to the green–it landed and stopped 2 feet from the hole.  I couldn’t believe it.  For the par 3’s against the wind–we were 6 and 7 irons to holes that were no more than 125 yards.  On some down wind holes-I hit 3 woods instead of driver to get more ball flight and was rewarded with 280-300 yard drives for these down-wind holes.

I really don’t know how I survived the walking as it was the first time in my life that I had ever walked 36 holes and to do it two days in a row in the wind was a major personal accomplishment.  We played well and were competitive in all of our rounds with only a few missed shots–our putting prevented us from getting into the winner’s circle but we were still satisfied with our performance.  This is probably a once in a lifetime event as I nurse the blisters on my feet as I write this.  The Champion golfers for this event were over par for the event gross and net but the winning team did card a gross score 65 in the third round which was one great performance given the windy conditions.