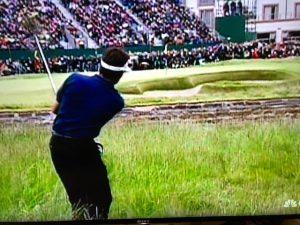 The fateful 3rd shot into the burn 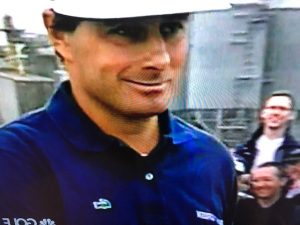 The smirk after getting away with the tee shot on 18. 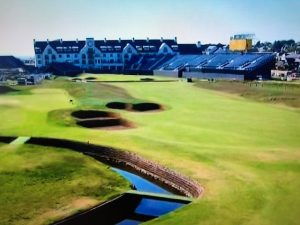 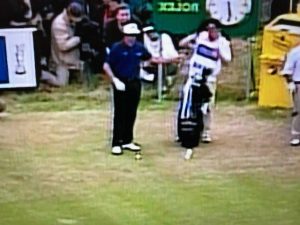 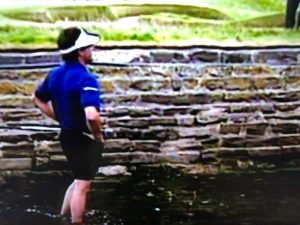 Paul Lawrie played extremely well and won this championship but he needed some help from the gods of golf and some decision-making by Van de Velde that would be second guessed for eternity.  Why select a driver on a treacherous 18th hole with a 3 shot lead?  Why go for the green after the tee shot miraculously crossed the burn on the right side of the fairway?  Why go for the green from knee-high rough which had punished the players all week?  Van de Velde had good answers for all of these decisions but he tempted fate with second shot and the gods of golf reacted by providing the worst break in the history of a major championship.  The chances that the ball would hit the grandstand and bounce backward, hit the stone on top of the burn and clatter into the rough have to be pretty long.

Van de Velde gained more notoriety in his failure than Lawrie gained with the Championship but Lawrie’s name will be on the Claret Jug forever.  Van de Velde handled his fate with class accepting full responsibility for the outcome.  Many of the pundits wanted to blame his caddy for not talking him out of some of his decisions.  One commentator stated that the caddy should have broken the driver in two so Van de Velde would be unable to choose it at the 18th hole.

Unlike last year when I predicted that Jordan Speith would win the Open Championship, there is no way in my mind to predict a winner at Carnoustie.  The course is just too hard and if the weather plays a role this upcoming week, anyone can win and I wouldn’t be surprised if the winner was the 2019 version of Paul Lawrie (relatively unknown in 1999 but a fine player).  We can all just hope that the gods of golf will take this week and maybe the R&A will move the grandstand on 18 (probably not).