Update “Through the Green” or “Shameless Marketing” 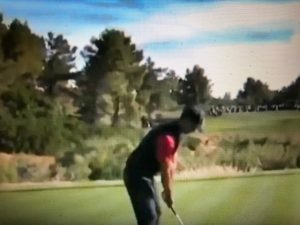 Tiger at the Hero Challenge

We had a conversation with my publisher yesterday and were surprised to hear that “Through the Green” was ranked No. 500 on Amazon in the Sports Genre category and  92 in the genre of Non Fiction Sports and Travel.  On Kindle the similar ranking was 70.  The publisher is very pleased with these results but told me that Amazon would pay much more attention if we had more customer reviews.  We have over 50 customer reviews on Amazon for Golf Chronicles but only 1 so far for “Through the Green.”  I assume, maybe wrongly, that most, if not all of you, have the book so this is a call and plea for reviews.  It’s pretty easy to post a review, you simply go to the Amazon site and look up “Through the Green”, scroll down to the bottom of the page and you will find the Customer Review section, simply click on “write a review.”  The review can be a few paragraphs or whatever you think is appropriate.  You will also find existing customer reviews posted as well.     You could also simply post a review to the web site at josephbronson.com.  I’m certainly interested in any feedback positive or negative feedback especially since I carved out a fictional short story at the end of the book and it would be interesting to hear what feedback I might get on my fictional writing skills as I continue to work on my next book–a novel (nothing about golf).  We’re also trying to promote the book nationwide with radio shows on sports radio spots.  Last year we were on radio shows in Chicago, Atlanta and San Jose.  One of these shows was more interested in my views of Colin Kapernick’s kneeling that the book but you take whatever you can get.  I’m also being considered as a contributing author to the “Golf Journal”, which is the “Harvard Business Review” for golf fans.  The Journal has a number of very interesting and unusual articles that you would never find in any golf publication.  An example was a very detailed and incisive review of the famous 16th hole at Pasatiempo Golf Club as it was designed by Alistair McKenzie.

As most of you know, we’re trying to advance the cause of golf participation and support for university golf teams so maximizing book sales enables this process.

There are a number of rule changes that will go into effect in 2019 which all seem to be designed to increase the pace of play and simplify the game.  Many of these changes bring common sense to the game as opposed to the inane artifacts of the past which people genuinely hated.  For example, if you putted with the pin in the hole and holed the putt, you were penalized.  If you hit your ball into the woods and can’t find it–you would have to go back to the tee and hit another with penalty–now you can drop the ball from where you believe it went out with a two shot penalty.  Instead of looking for a lost ball for 10 minutes, you now have 5 minutes to do so.  Most, if not all,  of these new rule changes for 2019 are designed to speed up the game and make it more enjoyable.

It’s getting difficult to understand the current version of Tiger Woods.  There are many of us (myself included) who reminisce over the years where Tiger dominated and was on a path to eclipse Jack Nicklaus’ record of major wins.  Tiger was invincible and intimidated his opponents to distraction and cruised to victory after victory.  His stated intention was to win every event that he entered as this was the sole purpose of competition.  The meteroic fall from grace, indiscretions and injuries generated a complete reversal of fortune for Woods as he tumbled off the pedestal of Golf Champion.  2018 saw the revival of Woods to form as he was competitive in many events and won a tournament in 2018.  A kinder and gentler more human Woods has emerged over these past years.  Jim Furyk’s decision to spend a Captain’s Pick on Woods for the Ryder Cup proved to be a disastrous decision for the USA team as Woods failed to score a point in the matches.  He recently virtually conceded a $9M match to Phil Mickelsen by not playing or putting well and losing to someone who’s not on his game either.  Tiger is one of the greatest players of all time but the sun may be beginning to set on his career.  I’m not there yet as he continues to baffle me as he is driving it as long as any tour professional and his short game has returned to championship caliber.  He is still making the odd mistake which costs him big time in tournament play so the future is pretty unpredictable.

Given the quality of today’s competition, I wouldn’t give him much of a chance of winning another Major but he should be a significant factor in the next Master’s.  No matter what Tiger will continue to generate significant interest in the game.