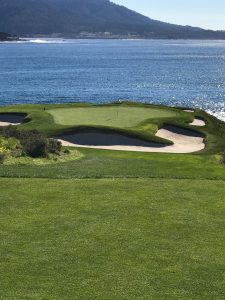 On December 19, we played in the Annual Pebble Beach Homeowner’s Tournament at Pebble Beach Golf Links.  The competition is a foursome team event with each contestant playing their own ball.  The two best balls are then selected to determine the team score for the hole.  We were quite optimistic about our chances.  This would be the eighth year in a row of participation in the event and we’ve won twice in the past seven years.  In one of those years, I had the best round in my life so there was not much of a chance that lightning would strike my game like this again.  I thought our team would be perfectly positioned  with 2 handicaps of 13 and 2 handicaps of 6.  Adding to our potential was the new rule that participants over 65 could play from the shorter white tees adding to our advantage.

The weather was extraordinary.  We’re usually shivering in high  40 degree temperatures that usually did not rise much higher than the mid 50’s requiring layers to cope with the elements.  Not this year–the weather was fantastic–the sky was blue and there was very little wind as the violent seas that pounded the Monterrey coastline were back to normal.

However, our perceived advantages seemed to be lost pretty quickly.  Our first hole was the most difficult-the par 4-10th hole which meant we would also be completing our round on the most difficult holes on the courses–the 8th and the 9th.  The first team tee shot found the Pacific Ocean and that was the omen that would rule this day.  It was a struggle for the most of the day as we started to recover and pick up some birdies on the back nine-actually the first seven holes of the course.  While I played pretty close to handicap, the team could not generate any momentum and we became an also-ran in the event.  One of my highlights was the tee shot on the short par 4, fourth hole.  The tee shot screamed off the club heading for out of bounds on the left and hit the cart path waved by Frank Quattrone’s home and faded just enough to stay in bounds giving me a 50 yard pitch shot to the green.  It was a strange way to hit a 265 yard drive but I couldn’t get the pitch shot close enough and had to settle for par.  This result came after hitting a legitimate 265 yard drive (best of the day) on the 3rd hole–of course, I dunked the 100 pitch shot in the left bunker but made par anyway.

I whined quite a bit on this day mostly to myself but I certainly was a bit frustrated. I was very disappointed  in the pace of play which took 6 hours and 15 minutes.  Traditionally this event has taken no more than five hours and with the max double bogey rule and the wonderful weather, the round should easily be completed within the prescribed 5 hours.  It would be convenient to attribute our inconsistent play to the disruption of waiting to hit every shot but it was the same for everybody so that would be a lame excuse.  I whined consistently about the pace of play probably to the point of annoying my team mates.  Slow tournament play drives me nuts but it didn’t really impact how we played.  When I continued to complain to other participants who I know well, their response was “Did you ever experience such glorious weather at Pebble Beach?  What better things do you have to do in spending six hours in such a wonderful venue”?  How does one respond to those statements?  I had no answer that would make any sense.

I still insist that it was disappointing that there was no attempt to regulate pace of play and I had to miss the post tournament festivities due to an important appointment.  The tournament organizers presented us with 3 golf balls as a tee prize–I thought last year’s hat was bad but this was clearly not worth doing.  I had offered “Through the Green” as a tee prize but the Committee never even gave me the courtesy of  a response.  The winning team shot 14 under par which, to me, indicated that some handicap histrionics were in place but these things really don’t matter.  In past years, conditions were a lot tougher so double digit under par was never accomplished.  The experience was still worth it and despite all of my whining, I’m sure we’ll be back here again next year to enjoy playing with my Pebble Beach neighbors.

← Update "Through the Green" or "Shameless Marketing" The Year in Review →