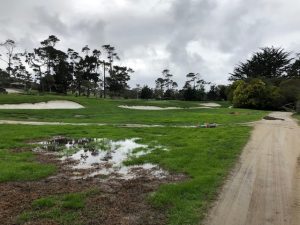 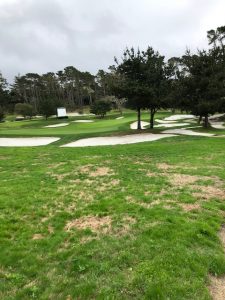 It’s hard to write about a tournament (Phoenix Open)  that you can’t watch.  We are here in Pebble Beach and lost power for almost a day from Friday AM to Saturday night.  Extreme wind and rain have blasted the Monterrey Peninsula causing significant havoc in the area including road closures, power outages and downed trees all over the place.  Personally, I became disgusted with the power outage situation since we are so tied to our dependency on electricity for TV, internet and phones.  I had planned to practice Saturday and hit some balls at the MPCC Point Joe range.  Instead I grabbed my carry bag with 5 clubs–driver, 5 iron, 7 iron, 60 degree wedge and putter and walked the Shore Course.  The winds were pretty horrific especially down at the edge of the Pacific Ocean.  The par 5, 12th hole had to be playing 650 yards against a 40 mph. wind in your face.  My tee shot found the fairway about 150 yards off the tee and I knew I had to lay up to the bern just 75 yards away with the clubs I had.  I was right and hit a 7 iron about 50 yards.  I slapped a 5 iron pretty well and found the green with another 7 iron in four shots for an unusual bogey 6 with two putts.  My tee shot at the par 3, 11th was 110 yards with a five iron.  In any event, it was very satisfying and refreshing to complete the round in just over 3 hours walking since no one else was out there in these conditions.

Of course, the tradition of playing golf during the Super Bowl continued on with a carefully scheduled 1PM tee time only to find a foursome on the first tee.  Not to worry, my playing partner locked his keys in his rental car so the next 20-30 minutes were spent trying to rectify that situation.  We never did catch that foursome but when we were about to, they quit–aha–had to be off to that Super Bowl party!  We played on with no one else on the entire golf course completing our walking round in three hours.  The Shore Course at MPCC drained very well from the overnight storms as the wind howled for the first 13 holes,  which I’m sure enabled the course to further dry out a bit.  The sun came out at the 14th and made us forget the cold and the wind of the previous 13.  It reminded me of playing in Scotland where you can play with all four seasons making an appearance during the round. 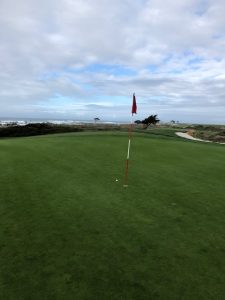 Showing off with Improbable birdie on the difficult 8th hole 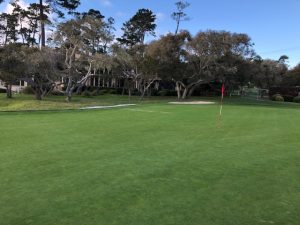 The sun comes out at 17–very weird weather day

Incredibly, the Phoenix Open was a lot more exciting than Super Bowl LIII.  The first three days of the tournament produced the usual birdie fest with benign desert conditions, warm temperatures and no wind.  Rickie Fowler took a four shot lead into the final round and the drama unfolded over the next five hours.  Weather conditions changed considerably.  Sunshine and warm temperatures turned to fits of rain and mizzle peppered by temperatures that dropped into the 50’s.  In 50 degree temperatures, there are no more 300 yard drives and the leaders found themselves in trouble for the entire day.  TPC Scottsdale is one of my favorite golf courses as it’s always nice to watch the professionals play the same holes that you’ve played any number of times.  Things would be difficult for the leaders as they struggled with the relatively easy par 5, third hole.  Fowler was all over the place on the hole but made a spectacular putt for par.  Kuchar and Justin Thomas had opportunities to close the gap but couldn’t convert their putts and Fowler still kept his lead. Fowler wasn’t done with experiencing trouble as I was surprised that he grabbed an iron on the 5th tee and pushed it left.  His 247 yard approach shot found all kinds of trouble and he ended up making double bogey while Kuchar and Thomas had their own share of trouble and both made bogey.  The end nearly came for Fowler on the menacing par 4, 11th hole.  The hole has water all the way to the hole on the left as well as behind the green.  The drive has to be to the right and keep the ball away from the water.  All three players in the final group knocked their tee shot into the right rough.  Fowler hit a pretty approach shot keeping it right about 15 yards from the green.  Fowler’s pitch looked okay and then accelerated careening off the green, rolled past the bunker and trickled into the pond.  This shot was a very bad break and ill deserved.  Fowler took his drop and then walked away to survey his chipping options.  Oops-after he marked the ball in play, the ball ran back into the water.  After much discussion and consternation, Fowler chipped the ball onto the green to 15 ft. and made a terrific putt for an imponderable triple bogey 7  temporarily losing the lead.  Most players would have “lost it” and bemoaned the unfairness of all of this but he realized that his marginal chip shot was the cause of his problems.  Kuchar, Thomas and Brandon Grace tried to mount a challenge but all of them left their “A” games in the clubhouse on this date and Fowler staggered into victory with a 74 (with a triple, double and single bogey).  Even on 18 with victory in sight with a simple drive in the fairway, Fowler pulled his drive into the spinachy rough that shaped the bunkers on the left side of the fairway.  Mere mortals would have left that ball in that rough and Fowler could have lost the whole thing.  He struck a mighty blow out of the green squash to pitch and putt territory where Fowler got it up and down to declare victory.  There are those that say that Fowler can’t finish a tournament and there is some evidence to support this.  Usually a leader in the 3rd round is never able to win a tournament shooting over par in the final round.  I would maintain that Fowler withstood bouts of extreme adversity in this event to persevere and take home the trophy.  I would tell his critics to “buzz off”—just try winning in this way. 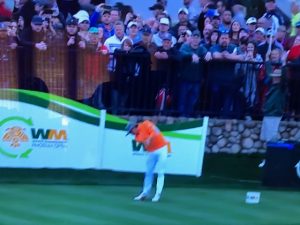 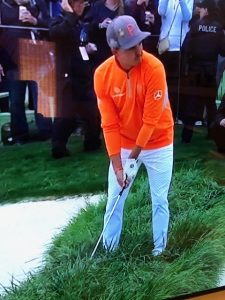 Tee shot finds the spinach in the church pew on 18 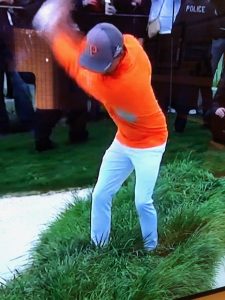 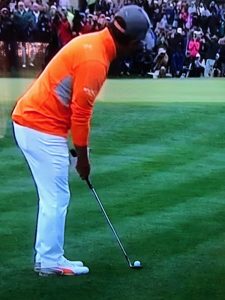 Chip and an a putt and a tough win

Last year I reported in this space how Sergio had lost it during a few professional events on tour.  One week he tossed in driver into the woods and almost lost the club.  When he found it in the woods, he took another swipe at it.  The next week he threw his putter a few times around the greens.

Well this week, Sergio is at it again–he was disqualified from an event in Dubai for smashing the green with his putter.  Is Anger Management class in Sergio’s future? He apologized profusely for his action but his behavior makes no sense.  He may need professional help.