The End of the Rain? 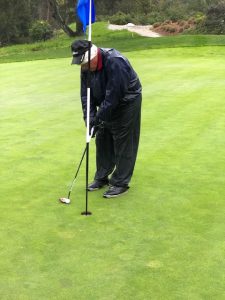 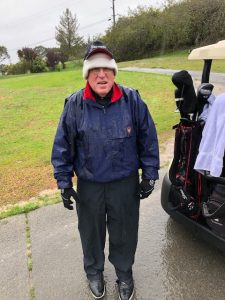 Dodging hailstones on the 11th

California has been pelted with rain for almost the last six weeks and I’m beginning to feel like we live in the UK.  We know this is not really true and can feel that the good weather is coming.  Our reservoirs are full, mudslides abound, our umbrellas are broken, street potholes have multiplied in droves so enough already–bring back the California sun.  Friday was a tease with bands of sunshine as I headed to the course for some practice in the afternoon as we were going to play Pasatiempo in Santa Cruz on Saturday.  The forecast was for some intermittent showers so it seems that conditions would be fine with perhaps a little inconvenience.  Well we couldn’t have been more wrong.  The word “intermittent” was inoperative as it was pouring on the drive up the hill over the Santa Cruz mountains and still pouring when we arrived.  We weren’t alone in our enthusiasm and assessment of the weather.  The tee sheet was full and I was incredulous as a four ball teed off right on their appointed time.  We continued to think that the weather would break and we would be able to have a dry round albeit wet under foot.  The course seemed to be in good condition from the drying that occurred in Friday.

Our assessment was completely incorrect.  Not only was it pouring rain, it was really cold as well leading to a new innovation.  I had never done this before but I took out the ski hat to keep my head warm and topped it with a rain repellent hat.  The idea was to keep your head warm and keep that ski hat as effective as possible with the repellent waterproof rain hat.  This idea worked but conditions continued to deteriorate as the rain turned to hail on the 12th hole.  I hit a pretty good drive and crushed a 5 iron through the hail pellets with a big splash into the green side bunker.  I was pretty pleased to have accomplished this in these miserable conditions.  The grips on the clubs were long gone and the rain gloves were the only reason I could hit any kind of shot at all.  I hit the bunker shot to within a few feel as the wetness stopped any shot that normally would have run on 15 feet.  The rain never abated and we were “drowned” as we approached the 18th hole.  I crushed an 8 iron to 20 ft. from the hole and two putted to get off the course.  Raingear, especially Zero Restriction, will usually dry in 30-45 minutes in the rain but not this time.  I had to take rain gear, gloves, hat and beanie to the home dryer.  The clubs were still damp on the following morning.  So much for intermittent showers–the forecast is turning positive that all of this stuff will end and we can back to our normal climate which spoils us.

Francisco Molinari did it again as he won the Arnold Palmer Invitational in the sunny climate in Florida besting the 3rd round leaders including Rory McElroy.  Molinari ran roughshod over the field with a final round 64.  Molinari blistered the field with another spectacular putting round reminiscent of his Open Championship performance in 2018. McElroy could do no better than even par and was disappointed with his even par final round, which just wasn’t good to catch Molinari who flew by the field and finished early coasting to victory.