DeChambeau Powers on at Bay Hill 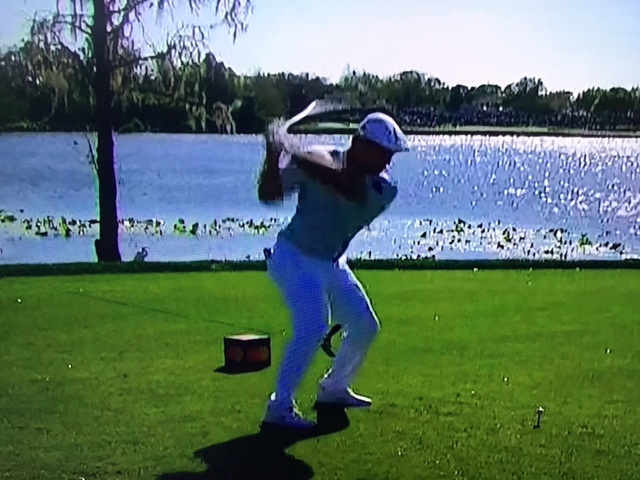 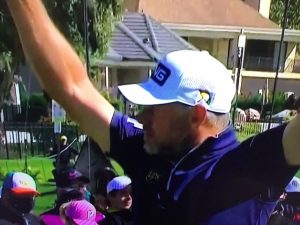 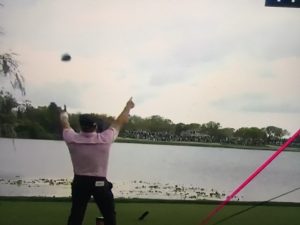 “It’s Outta Here”, “It’s Goooddd!”,–Baseball?, Football?–No it’s Golf!  156 professionals played the difficult Bay Hill course for four days and it all came down to the last putt on the last hole.   Arnold Palmer’s tournament couldn’t have been more exciting.  Bryson DeChambeau made that last putt from five feet to win the event.  Sunday’s final round started with Corey Conners holding a 1 shot lead over DeChambeau and Lee Westwood.  Westwood’s play was a real surprise.  At age 47, Westwood has had a stellar career without a major championship and has knocked on the door many times.  It seemed that he would be typecast as the “David” in his pairing with  the power hitting Goliath, DeChambeau.  On one hole DeChambeau outdrove Westwood by 150 yards.  On Sunday, the winds blew at Bay Hill and scores went up significantly.  Sunday’s average round was 75.5 across the field.  One by one, the field fell back and couldn’t emerge from the back to contend.  DeChambeau was so pumped up on Sunday that his first tee shot thundered into the right side and almost went out of bounds.  He produced a pretty good bogey out of the mess but was undaunted as he proceeded to birdie the par 5, 4th hole.  The sixth hole, a par 5 of 55 yards is difficult drive over the water and very similar to the dangerous 18th,  became the first major moment of the final round.  After considerable discourse with his caddy DeChambeau decided to take the most aggressive route and smashed it  377 yards as he made yet another birdie on the par 5.  DeChambeau raised his arms in triumph as the ball rocketed over the water to its 377 yard resting place.   His gesture following the shot  demonstrated that he was having fun and the limited Florida gallery enjoyed it immensely.  Westwood wasn’t collapsing or unnerved. He hit his own tee shot on a similar but less aggressive line some 310 yards.  He was also having fun and raised his arms similarly to DeChambeau.  Game on!  Westwood wasn’t flinching and he seemed buoyed by DeChambeau’s thundering drives and plodded along matching DeChambeau’s scorecard with steady play and accurate iron play.  When both men reached the back nine, it was pretty obvious that no one else in the field was going to come out of the pack and contend for the lead.  One by one all the challengers failed to execute shots as Bay Hill’s winds made pin seeking quite difficult.  Jordan Speith’s putter ran adrift on this Sunday as he played reasonably well from tee to green but couldn’t convert a number of birdie and par putts.  He bogeyed 3 of the last 4 holes to shot 3 over 75.   It was another successful showing for Speith as he keeps knocking on the door week after week.  This week he would finished in a tie for fourth place.  On the 11th hole, DeChambeau had all sorts of trouble,  He pulled his tee shot and just avoided the water hazard on the left side of the fairway.  He had a clear shot to the green but missed it and had a half fried egg lie in the greenside bunker.  The lie was rather impossible and it would take a miracle to blast it within 20 feet and the miracle didn’t happen and DeChambeau now faced a 50 foot putt.  Now TV commentator, Paul Azinger used the term “miracle” to describe the difficulty of the putt and the Zinger had already posted a bogey onto DeChambeau’s card.  Instead, DeChambeau executed the miracle and left the 11th panting with his one shot lead.   Westwood was already in for a par but DeChambeau willed in the putt and it seemed that Arnold Palmer was  looking down from above wanted this putt to go in.  Westwood would grind out a great birdie on 12 but then missed his par putt on 14 to be one off the lead.  DeChambeau and Westwood would continue to match shot for shot until they came to the 18th hole.  DeChambeau launched another tee shot 330 leaving him with 128 yards to the dangerous back pin position.  No player in the final round had come closer than 20 feet from Sunday’s final pin position.  Westwood summoned up his best stuff–he had survived the long tumultuous day and was still in the tournament one shot back.  He made terrific contact and the ball headed down the middle of the fairway only to take its final roll into a sandy divot some 165 yards from the hole.  It was a serious stroke of bad luck for Westwood who needed a real birdie attempt to try to catch DeChambeau.  If you look at DeChambeau’s incredible 50 foot putt on 11 and Westwood’s “roll” into the divot–you wonder how the gods of golf work their magic.  Westwood  would hit a terrific shot out of that divot but he was 65 ft. from the hole.  DeChambeau’s short iron landed in the middle of the green about 30 ft. away.  It seemed that Westwood completely misread his putt and had a little more than 5 feet on the left of the hole.  All DeChambeau had to do was to cozy his putt up to ‘gimme” distance for an easy victory.  Instead DeChambeau’s putt ran almost 5 feet past the hole with some gasps from the gallery surrounding the 18th hole.  Westwood was away and calmly drained his putt knocking it inside the right side of the hole for his par.  DeChambeau would have to make the putt to win the tournament and there was an opportunity for a lot of distractions and thoughts to seep into his mind.  It was not an easy putt and DeChambeau walked away once to reinforce his concentration and the line and he made it for the victory.  He would shoot 71 with only 1 other competitor breaking par on a difficult Sunday at Bay Hill.

Arnold Palmer would have loved the way this event unfolded especially with the golf course beating up the field on Sunday.  DeChambeau was pretty emotional with the victory as Palmer had sent him a congratulatory letter on a prior tournament victory just a week before his death.  DeChambeau is really doing quite a bit for the concept of power golf.  One wonders how long the body can handle 200 mph swing speeds.  Injuries in golf are not good things as power hitters such as Brooks Koepka are sustaining various maladies and missing events.  A golf career is truly a marathon as evidenced by Jack Nicklaus.  One has to wonder what Tiger Woods could have achieved without his injuries as his record of achievements is already mind-boggling. 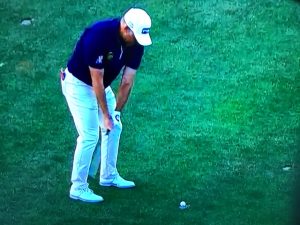 Westwood’s drive on 18 rolls into a divot