US Wins the Walker Cup in a Hard Fought Battle 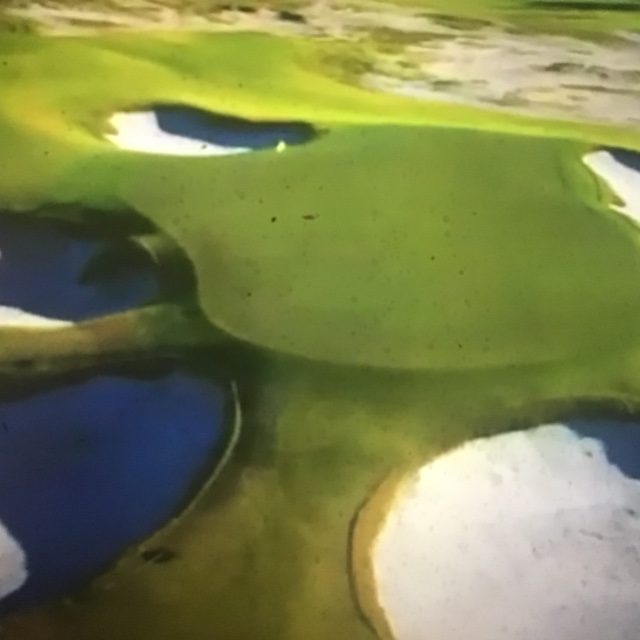 The USA won a hard fought victory over the team from Great Britain and Ireland (GB&I) by a score of 14-12.  The match was full of pressure and intrigue as the US held off the challenge of the game GB&I squad.  Based on amateur records and world rankings, the US was heavily favored to win the matches but the game of golf played at the one of the toughest venues on the planet-Seminole Golf Club equaled the odds. Seminole has been continuously rated as one of the top five courses in the United States for many years.  The club is intensely private and relatively unknown to non-members other than its rating and outstanding reputation.   In addition to the difficulties presented by Seminole, the players had to deal with a non Covid  gastro-intensive virus that impacted almost every player on both teams who traded places in visiting the hospital for revival.  Officials had to allow the team captains to have their alternates on the premises for potential play in the matches something that has never been done before.  Reigning US Amateur Champion Champion, Tyler Strafaci could not play in his Saturday match and had to bow out.  He tried again valiantly and played  in the Singles on Sunday but clearly struggled on the back nine with his stamina.   He deserved a lot of credit for playing as well as he did.   Joe Long, the British Amateur Champion had become so ill that his first action was also in the Sunday singles.  Long was able to defeat USA’s John Pak in the Sunday final on the 18th after duck hooking his tee shot into a strange place on the 18th hole.

The Walker Cup Match is a biennial 10-man amateur team competition between the USA and a team composed solely of players from Great Britain and Ireland.  It is played over two days with 18 singles matches and eight foursomes (alternate-shot) matches.  The matches began under the guise of George H. Walker, grandfather of President George H.W. Bush (41) and great grandfather of President George W. Bush (43).  The matches and rules are administered by the R&A and the USGA.  The venues for these matches are among the best courses in the world and Seminole was hosting the 2021 matches for the first time in the matches 99 year history.  The Old Course at Saint Andrews has hosted the event 8 times since their inception with only Royal St. Georges and Royal Liverpool have hosted the matches more than once.

It seemed to me that the competitive environment was incredibly intense and packed with pressure.  Perhaps the difficulty of Seminole, the history of the event, the players who have played in this event coupled with playing for your country stresses the abilities of the best amateur golfers in the world.  Most if not all of these players will be turning professional and have exceptional careers as professionals.  An event like this is a simple golf competition without thousands of screaming fans where the simplicity and necessary execution of golf shots is the only thing that matters.  The matches are very dissimilar from the Ryder Cup, which has become a jingoistic, commercial presentation of golf that really detracts from the playing of the game itself.  The Walker Cup format is simple and easy to understand.  There is no yelling or screaming or flag waving–there are a few fist pumps but only after something special has happened.  It’s almost like playing golf inside a cathedral.  Stewart Wilson, captain of the GB&I squad wanted his team to stick very close to the USA in the foursomes matches in order to give the individuals the opportunity to take on and possibly upset the USA.  Playing Seminole seems to give you the feeling that you’re not playing in Florida–you might just as well be in Long Island or the Jersey shore.  Seminole had wind with firm, fast greens that measured at least 14 on the stimpmeter.  Two holes stood out that were critical factors in many of the matches.  The par 3, 17th hole of 185 yards seemed almost impossible with very difficult pin positions as the tee shot had to land on the left side of the green to get anywhere near a pin position where two putting was possible.  Many shots hit at the hole or slightly right of the hole ended up in the bunkers or a horrible collection area making par a heroic act.  The 18th is a 445 monster par 4 right off the ocean that will be impacted by the winds.  A number of the players ended up missing the fairway right and ending on the driving range.  A few players actually struck fabulous shots from the driving range into this green. 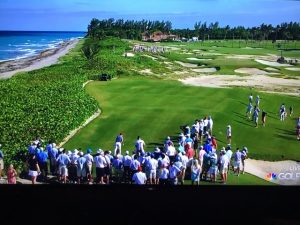 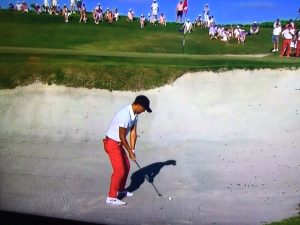 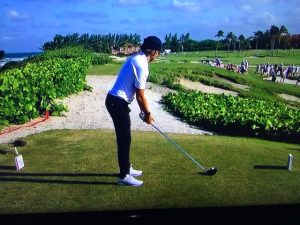 I can’t remember seeing such intensity, focus and concentration in the eye of the contestants of both sides of this event.  There seems to be a lot going on–playing for your country, playing one of the top clubs in the country, playing for your teammates, playing for yourself and establishing that gilt edged reputation.  You might think that these characteristics would be evident in most golf amateur events but these guys seemed mesmerized by the entire experience.  My sensation is that the combination of all of these factors were 3X that of the Ryder Cup.  Players in the Ryder Cup have established reputations, money, prestige and standing in the golfing fan infrastructure–these kids aged 19-25 have none of this except a hard earned amateur track of qualifying for this team.  Then there is 30 year old Stewart Hagestand who holds down a full time job while maintaining his amateur status as one of the finest amateurs in the country.  Stewart came through on Sunday producing a significant point for the USA team.  I was also very impressed with the Sunday singles match where both captains wanted to get that first point on the board to establish momentum.  Alex Fitzpatrick torpedoed out every day for GB&I against stellar USA competition and his Sunday match against Piersson Coody was as intense as any.  Coody prevailed in the match but had to hit some remarkable shots on 17 and 18 to make it happen.  Coody is the grandson of former professional and Masters Champion, Charles Coody.  Coody’s Sunday point was hard earned against a very game Fitzpatrick.

An event that is usually chock a block with drama and intrigue seemed to be a cakewalk for Rory McIlroy as he pulled all aspects of his game together at the same time for a solid victory.  McIlroy had to make it interesting on the difficult 18th hole–the 72nd hole of the tournament where he held a 2 shot lead.  McIlroy had driven the ball well all day now smashed one left and almost found the creekside penalty area.  Instead the ball was embedded in deep rough and McIlroy was able to extricate himself out of this unforced error with a wonderful recovery shot and posted a bogey for the one shot victory.  The tournament was his to lose and this tee shot at the 72nd hole almost undid him but he pressed on to the victory.  Quail Hollow is well known for its final 3 holes dubbed the Miracle Mile where tournament suspense usually occurs.  This year the Mile claimed everyone in the field and McIlroy survived his tee shot on the tough 18th hole to bring home a victory that was his first in a while.

← Complete a Brief Survey and Win a Copy of One of my Books! PGA Championship-Mickelsen Shocks the World →