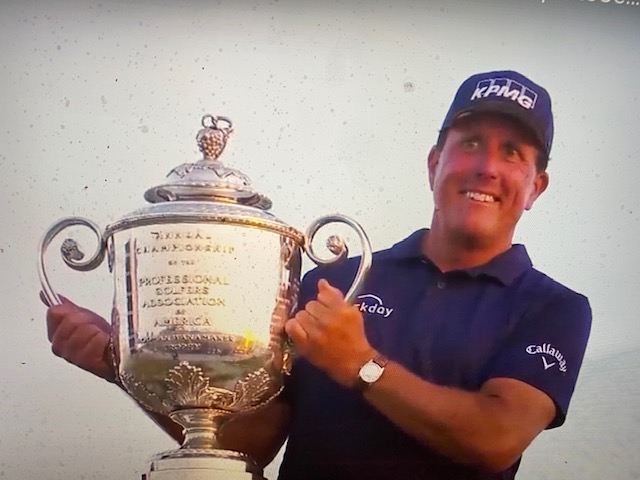 Phil Mickelsen did what no one has been able to do at age 50-win a major golf championship.  Mickelsen persevered and grinded through the final round to persevere and defeat the field that couldn’t overcome the winds and the golf course. Mickelsen was an improbable choice in this event especially at a difficult golf course measuring over 7,800 yards.  I thought that conditions were “ripe” for something special to happen as the Kiawah venue provided the most difficult test for the field and the winds neutralized some of the advantages of the power hitters.    World No. 1 Dustin Johnson missed the cut and Rory McIlroy was dispatched in the first two rounds although he did make the cut.   Mickelsen came  through in this event some of which had to do with Mickelsen and some external factors enabled his effort but this should not detract from his tremendous victory.  Mickelsen seemed to come into this event with a different mind set and a quiet determination where he would stay under the radar screen.  His recent performances didn’t bode well for his potential here so he had little to worry about from the golfing media.  Some examples:

-conditioning–Mickelsen is clearly more “svelte” than he has been in years, which adds stamina and enables the mental part of the game

-most importantly-he would have to change his mental approach–he slowed things down and played the course one shot at a time.  It was obvious that he had to force himself to conform to this “new” level of focus and behavior.  He spent so much time with the course yardage book that it appeared he was in the library rather than playing golf.

There were some external factors to Mickelsen that also worked to his advantage.  Some of these were:

Kiawah is a hard course and conditions would be windy at some level throughout the four days.  At more than 7,800 yards–the field would be held to a similar standard with the wind providing an equalizer.  For example, Bryson DeChambeau decided to hit an 8 iron on the par 3, 17th hole from 207 yards during the third round, which ended up in the pond for a double bogey 5.  DeChambeau continued to struggle with yardages in the most recent majors.  He might do well to also slow things down and strengthen his focus especially in the short game area.

Mickelsen clearly benefitted from the perils of Brooks Koepka’s putting woes over the final 36 holes.  Mickelsen was never really challenged by competitors after he regained the lead with a spectacular hole out from the greenside bunker on number 5.  He and Koepka had been trading “punches” over the first four holes on Sunday but the sand shot on number 5 was a momentum driver.  Koepka couldn’t find the fairways in the middle of the round and he fell too far behind to try and mount a challenge.  Louis Oosthuizen played consistently well over the last 36 holes but simply could not make the putts that would have increased the pressure on Mickelsen.  The biggest competition and threat to Phil’s victory was the difficulty of Kiawah itself.  There is no shot on Kiawah that can be ignored as the wind is ever present and you have to think through every shot.

I couldn’t help but remember how Tom Watson almost won the Open Championship at Turnberry at age 59 but in that case, Turnberry’s crusty fairway spoiled Watson’s approach shot on the 18th hole and he would fail there.  Kiawah seemed to help Mickelsen at the end as his tee shot on 18th was smacked into the gallery leaving him with  about 150 yards and he was able to hit a gorgeous 9 iron to 16 feet to seal the deal.

No matter what the factors are, Mickelsen’s victory is a remarkable achievement for the ages and he deserves all the credit for his perseverance, patience and approach to being the oldest winner of a major championship.  The gods of golf are smiling!

It seems to me that the PGA has finally found a venue that is both difficult and fair that gives all the participants a chance.  Even though the course measured out at 7,858 yards, the long hitters really didn’t have a distinct advantage.  The wind played in one direction for the first three days and then changed completely for the final round.  The front nine is where the birdie holes were as the backside after the 10th was very difficult.  A number of players made major moves only to be undone by the 13th hole and beyond.  Kiawah is a complete grind from the first hole to the end.  The ball has to be placed in particular spots if you want to look for birdies but the greens had a number of subtle breaks especially close to the hole that baffled the field.  Mickelsen, in the end, made the fewest mistakes and a four day total of -6 was a testament to how difficult it was at Kiawah.  Mickelsen was grinding from the very beginning of the tournament as he bogied 4 of the first 6 holes of the tournament.  In prior events, Mickelsen may have lost interest and throw in the towel early.  From the sixth hole on, he was five under to complete the first round at two under par 70.  Kiawah’s closing holes are brutal and usually into the wind except those holes were downwind on Sunday.  The field was bogeying the 17th and 18th holes in the first three days as these holes have to be experienced to realize how difficult they really are.  The 17th hole has been claiming victims since it was designed in 1991 as the Ryder Cup match of Mark Calcavecchia .versus Colin Montgomery was halved after a few balls ended up in the pond.  I always aimed to get the balls into one of the bunkers when I played there where at least a bogey can be secured.  On Sunday, playing unusually downwind, Mickelsen hit a 6 iron over the green into some underbrush and managed another brilliant pitch shot to save bogey and take a two shot lead into the final hole.    The 18th hole of 439 yards plays close to 500 yards against the wind, leading to a number of bogeys.  On Saturday, Mickelsen would hit another incredible chip shot from behind the green and hole another putt for a very difficult par that kept him in the lead. 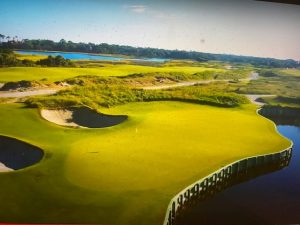 On Saturday, Mickelsen seemed to really step up his mental game plan.  He slowed down considerably stuffing his head inside the yardage book, consulting with his caddy incessantly and just seemed to tune everything out–including the crowd.  I thought his demeanor after he pulled his 2 wood into the pond on the 13rd hole was incredible.  There was no change in expression and Mickelsen determined that his tee shot never crossed land and he had to hit his 3rd shot from the tee.  He was perceptive and knew that Oosthuizen’s drive had crossed land and that he had a drop from the other side of the fairway.  I could only recall two other players with similar focus–Jack Nicklaus who stared down every shot and Tiger Woods who used his creativity and imagination to create the right shot in the circumstance. In my view, Mickelsen played deliberately with a consistent tempo that was not slow as every shot was analyzed prior to its execution.  The yardage book looked like a mini encyclopedia and hardly fit in his back pocket. 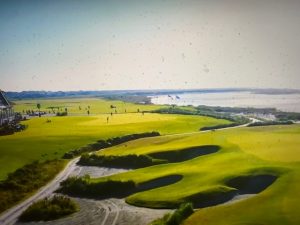 Koepka played extremely well tee to green but was clueless on the greens citing that this was the worst day he ever had putting in a professional event.  He just couldn’t seem to be able to figure out the speed of the greens and it seemed that frustration was beginning to mount. Oosthuizen also couldn’t make any putts but he was all around the holes.  Nothing would go in and Louis lost a few drives to the right of the fairway, which cost him but he still hung in there and would be a viable contender on Sunday.

Mickelsen’s drive on the 16th hole on Sunday was the ultimate statement as to who was going to prevail.  The mighty Koepka hit a spectacular drive 361 yards down the middle of the par 5.  Up steps, Mickelsen who gives it a mighty wallop to run it by Koepka at 366 yards.  This was the penultimate statement and Mickelsen is enshrined forever as holding not only a record for longevity but winning a tournament on a course that was this difficult was a spectacular achievement.

← US Wins the Walker Cup in a Hard Fought Battle Koepka/DeChambeau, The US Women's Open →