War of Attrition at the Traveler’s -“The” English Wins 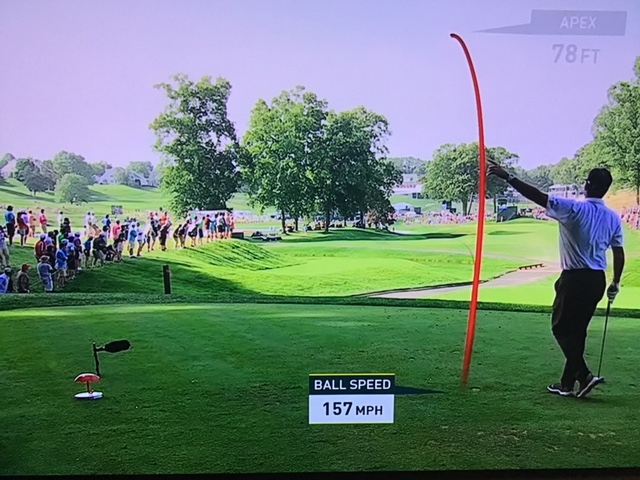 It only took 80 holes for Harris English to sink a 15 foot putt on the 18th hole to finally beat a very game Kramer Hickok. Hickok, a young Texan who once caddied for Jordan Speith as a teenager, made more putts that most leaders make in a US Open.  He had a 40 ft. putt to win in the playoff veer off at the last millimeter–it seems that the gods of golf were smiling on Kramer but this would not be his day–there will be other days when he breaks through the winner’s circle.  Kramer made so many clutch putts that the crowd began to shout “Kramer, Kramer” as he quickly became the crowd favorite.  Neither player committed an unforced error during the playoff and English executed some excellent shots out of the deep rough on 18 to keep himself alive in the game.  Likewise Hickok holed a 25 foot putt to save par while English missed a birdie putt of only 8 ft. to win the tournament. 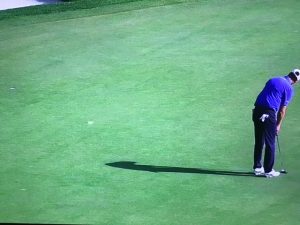 English finally holed an 15 footer for the win and this was the only birdie in the entire 8 hole playoff.  It was a bit boring playing the same holes over and over again to see if either player would make a mistake but there was a lot of adrenaline and the crowd was really amped up  in a positive way.    Hickok certainly didn’t lose this tournament as English’s birdie putt was far from simple   Both players hit some terrific shots out of the 18th hole fairway bunkers and the thick rough in uneven lies adjoining the 18th fairway.  They played the 18th hole six times on Sunday for a total of 10 holes in the tournament.  I’m sure they both recognize and remember every blade of grass and green undulation at River Highlands forever.

The collapse of Bubba Watson at the closing stages of the tournament was shocking and completed unexpected.  A strange thing happened to Bubba Watson on the 15th hole and it seemed like his entire golf game imploded. He was playing flawlessly and the commentators stated that he should be able to just walk it in once he got to the 15th hole with a lead.  The tee shot on the 15th found the creek to the left as it seemed Bubba had started to block some iron shots on 13 and 14 but managed to mostly escape.  His approach shot to the 14th was also blocked but he was able to clear all of the trees but it was the beginning of the end.  It’s highly unusual for an accomplished professional or any professional for that matter lose the plot, particularly when they are leading the tournament.  It was as if the swing blew a head gasket causing the car to come to a complete stop.   He bogeyed the last five holes to shoot a 10 handicap special 41 with some flubs, stubs and blocks–it was sad to see as he disappeared from contention from 1st to finish 19th.  Bubba lost the plot on the 13th hole when it seemed he started to block his iron shots thereby missing greens and missing putts.  He had to be churning inside as he just couldn’t summon the game that had vaulted him into the lead in the tournament, which he held through the 12th hole. 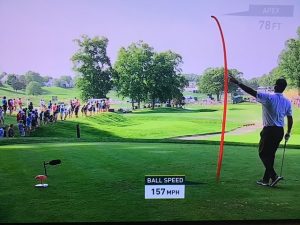 Watson’s tee shot on 15-beginning of the end

Mark Lieshman posted an early score of 12 under, which didn’t look like a winner but with a few holes left-only English and Hickok were in position to beat that score.  Lieshman headed for the driving range to prepare for a potential playoff spot but English’s birdie on 18 vaulted him to 13 under and English ended up taking Lieshman’s practice balls  on the range as only Hickok could catch him and Hickok did with a birdie on 18.  I found it interesting that English had the opportunity to warm up as Hickok and Watson completed their rounds and you would think might hold some advantage in the playoff.  Well English’s first tee shot on the first hole of the playoff went sailing into the right deep rough–so much for the warmup.

It was an exciting event and my only complaint was playing the 18th hole over and over made it really difficult for the players to focus.  The 435 yard, par 4 is defenseless against players that hit their drives 300 yards plus.  Every approach shot to this green was a lob wedge.  I would have put the 15th and 16th holes in the playoff mix.  The 15th is the signature hole, which can be driven, as it is a par 4 of 312 yards chock a block with trouble everywhere if any shot is offline as Watson found out in the final round.   The 16th is the par 3 of 175 yards that has to carry the pond and the Sunday pin position was no more than 15 feet from the pond.  English was one of the few players on Sunday that birdied the hole keeping the ball below the pin.

The Traveler’s event at TPC River Highlands always seems to be a very interesting competitive event.  I’ve had the opportunity to play there many times being a Connecticut native and actually had some tournament success there.    The course provides a number of interesting holes which require a wide variety of shots and different club selections.  The back nine is a bit more challenging and the 15th short par 4 and the 17th are usually pivotal holes in the tournament.  The 15th is drivable but pretty penal if you miss the green with the attempt–the green is difficult with subtle breaks towards the pond.  The 17th is a great architectural hole of 420 yards where the professional has to use an iron or a hybrid club to place the ball at the 150-160 yard level.  From there the approach shot has to carry the entire distance over the pond onto a very large green so there is no room for error.  Many contestants in the Traveler’s have been punched in the gut by the 17th and eliminated from contention.  For Watson, it was another upper cut to the jaw as his approach shot found the lake and he made another bogey.  On the other hand, Hickok drained another tricky putt for par and preserved his chances as he birdied 18 and made it into the playoff with a final round 67.

← Rahm Wins the US Open Memories of Royal St. Georges →