Rahm Wins the US Open 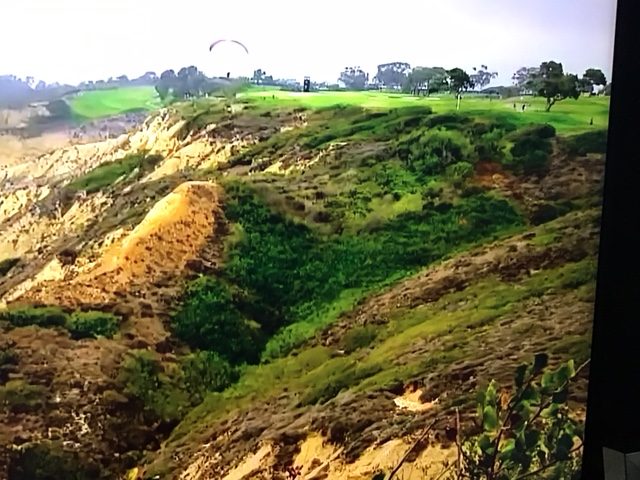 It all came down to two putts on the 71st and 72nd holes of the U.S. Open at Torrey Pines John Rahm simply didn’t make any mistakes on the back nine. He persevered while all the other competitors imploded on the back nine. The back nine at Torrey Pines on Sunday could have just as easily been the Third Flight of a Country Club Championship. Balls were flying everywhere, shanks, topped shots and a bunch of pulls and even slices. The US Open rough awaited all of these miscues and immediately removed the potential for pars and birdies. Torrey is difficult to begin with and adding the US Open rough and pin set up presented a challenging set of circumstances. The leaderboard was a virtual who’s who of the modern era as those that led early could not keep pace with the perils of this layout. George Bland (?), I thought it might be the resurrection of longtime Oakland Raider George Blanda, was leading the pack through the first 36 holes. He drove it in the fairway and made the putts, which he could not do in the final 36 and skied to a pair of 78’s. At age 48 and driving it 50 yards behind the competitive bombers, Torrey eventually caught up to him. A similar fate was experienced by Russell Henley as the sheer length and grind of this course eventually slayed him. 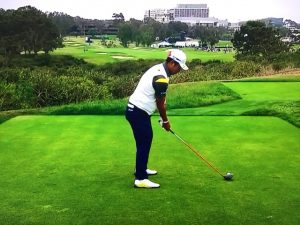 The biggest surprise in the field came from the bat of Bryson DeChambeau–DeChambeau’s strategy was resolute-hit it as far as you can and shorten the course. He was comfortable in having the strength to blast it out of the deep rough if that was necessary. and blast his way into contention. With a wide selection of all of these in the first 54 holes, DeChambeau was still in contention. On the 8th hole on Sunday, he hit a pitching wedge 175 yards to the 2′” line for a birdie and top the leaderboard at 5 under par. He proceeded to shoot 44 on the back nine with a plethora of pulls/hooks/slices/shanks etc. that resulted from missing fairways. From taking the lead on the lead at the 8th, DeChambeau’s Dr. Jekyll and Mr. Hyde round was amazing especially the “8” on 17. DeChambeau’s strategy is to bomb your way home and let the chips fall where they may and in this case there was shrapnel everywhere including a box of beer cans on the 13th hole, which collided with one of his bunker shots.His post press conference was non nonchalant and charming attributing the horrid back nine to a bunch of bad breaks. A defending US champion can behave like this publicly but I wouldn’t want to be around him for the next few days–I’m sure he’s extremely unhappy with his finish and he’ll have to add some homage and offerings to the golf gods to get his game packaged for continued success. His media nemesis, Brooks Koepka, was also in great position to win another major title but the final round just didn’t work out for him. He couldn’t put the ball in the fairway when he needed to and missed a fair share of short putts (not as bad as the PGA Championship) and finished 4th. (DeChambeau finished 26th thanks to the back 9 implosion. 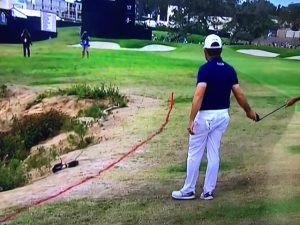 Louie O. dropping after hitting into the brush on 17

Louis Oostheuizen was probably the best player on the course for the entire week from tee to green. He was consistent and he was constantly in position to take over the tournament. His eagle on the final hole in the third round with a 50 ft. plus putt, gave him the lead and placed him in the final group. He made one huge mistake the entire week and it probably cost him the tournament. He missed the drive on the 17th hole where it can’t be missed–on the left side of the fairway to produce the bogey that would vault Rahm into the lead. It was actually a “good” bogey. Then there is your winner John Rahm who was attributing justice and karma as ingredients for his victory. Truth be told, he played almost flawlessly on the back nine making no mistakes and putting himself into position to make birdies on the way in but the putts were not dropping. On 17 and 18, the putts dropped and he hoisted himself into the lead that Oostheuizen squandered with his drive on 17. Rahm’s victory is a bit of justice after being disqualified two weeks earlier due to COVID-19 with a six shot lead. My sense is that this had little to do with it…I checked with the golf gods and they were absolutely neutral on the issue–Rahm was going to have to win this without supernatural assistance and that he is exactly what he did.  No one lost this tournament–Jon Rahm grabbed it by the throat and won it. 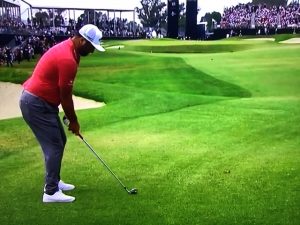 As I had predicted last week, the 12th, 13th and 18th were major factors. The 505 yard, par 4, 12th played tough all week as its length makes it difficult to go pin seeking. The focus has to be getting the ball onto the green. Any tee shot that didn’t find the fairway made it virtually impossible to hit the green from the deep rough. Oosteuizen played the hole better than any of the leaders at 1 under par for the tournament while Rahm and Koepka were 1 over. The pattern for 13 and 18 were also very similar. The 13th is a three shot, par 5 provided you hit the ball in the fairway as the second shot has to carry the upslope on the way up to the green. Some shots would normally have made the green but trickled back from the slope although a few shots made the green in 2 but they were few and far between. Koepka played the 13th in 2 under par with Rahm even and Oosteuizen at 1 under par. 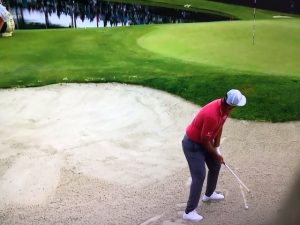 The drama unfolded on the 18th hole–the Saturday pin position was just over the pond so it would be difficult to go pin seeking guarding against eagles but it certainly was a birdie hole. If you hit the ball in the fairway, most all of these guys knocked on the green in 2 and many of them made birdie. Rahm played the 18th almost perfectly as the second shot was key after a good drive in the fairway. Rahm knew that the green runs hard top to bottom and right to left with this pin position-his second shot was aimed to the right and caught the bunker on the right side of the green. He hit a terrific bunker shot to the top of the right side of the green and allowed it to meander down to the hole but he still had to hole a 15 footer for the birdie. He would need that birdie as Oosteuizen missed the fairway but his approach shot to the green afforded him the birdie opportunity, which he made to finish 1 back. Oosteuizen played 18 at 5 under for the week and Rahm was 4 under for the week. The difference was Rahm’s birdie on 17 and Oosteuizen’s  bogey on the same hole. 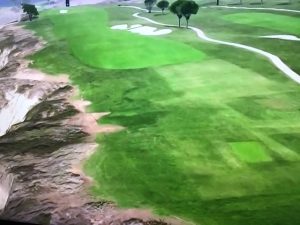 The narrow, treacherous fairway at 17.

I would give the USGA an A+ for the setup of Torrey Pines. The course was tough but fair and the best players in the world emerged into one of the best leadership board you could ever envision as names such as Dustin Johnson, McIlroy, Morikawa, Paul Casey, Schauffele, Molinari, Cantlay and many others were all there and had a chance to win. It was a nice tribute to outgoing USGA President Mike Davis who completed his 33rd year as leader of the USGA. The USGA has had its fits and starts over the years at places like Shinnecock and Chambers Bay but they got this one right.