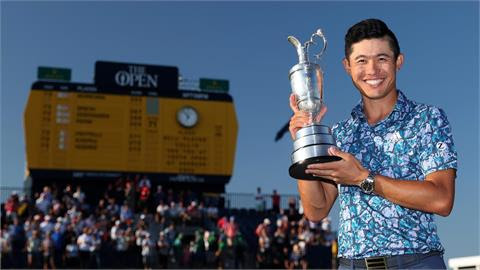 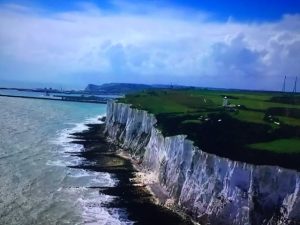 It seemed that Morikawa approached the first tee with a steely, confident focus on his game plan. Oosthuizen seemed to be relying on his performance of the past 3 days where he had grooved his swing nicely with an air of confidence such that this could be the day that he would silence the critics. Both players played the first three holes in even par and once again the 4th hole would play a huge role in the outcome of the event. The Sunday pin was placed in the upper right portion of this large green. This Sunday pin position introduced some humps and bumps that would impact approach shots to the green. The players who had preceded the final pairing were suffering on this hole with a plethora of bogies with the rest of the course as an entree for a birdie feast. Players tried to run their approach shot up to the pin and found that their shots sailed or rolled through the green into the rough at the back of the green. This pin was similar to the pin at the 18th at Turnberry where Tom Watson’s pefectly hit 8 iron ran from the front of the green through the green forcing a difficult chip which he did not execute. Other players missed the green to the right perhaps trying to take the humps out of play and get close to the pin in the benign conditions where wind wouldn’t be a factor. Oosthuizen missed his approach shot to the right and was also a bit short. He would have to navigate the hump on the green and pitch his shot far left to have it roll toward the hole. He didn’t execute that shot well enough and made bogey. Morikawa also missed his approach to the right and landed in some pretty awful gnarly rough. He was pin high and didn’t have to negotiate the hump on the green and he executed a difficult chip shot pretty well and then proceeded to drain the 8 foot putt for an outstanding par. Morikawa now caught Oosthuizen and this had to be a gut punch for Louie. 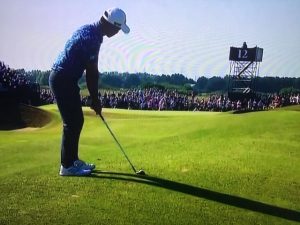 Staring down a wedge shot on 17

For Morikawa, this was only the beginning of a number of clutch putts that he would hole throughout the day. Once again the 4th hole was a major factor in the event despite no player having to deal with the  infamous Himalya bunker. The two dueled for the next few holes until Morikawa took the lead with an outstanding birdie on 7. Oosthuizen seemed crestfallen as this would be the beginning of the end of his quest to win his second Open Championship. The rest of the pack was in hot pursuit but players such as Koepka, Johnson, and a number of other players couldn’t go low enough to put some pressure on the leaders. There were a number of 65’s and 66’s  but not enough to contend. Jordan Speith would provide the competition on this day with an amazing performance of good ball striking, chipping and putting to putt pressure on Morikawa. Morikawa was oblivious to the pressure. He just played the game shot by shot, hole by hole and made every putt down the stretch. He was hitting fairway woods to avoid bunkers and yet his length put him into position to hit all the greens. 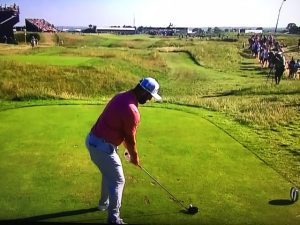 Jon Rahm was lurking and gaining momentum in the early part of the round but missed a few opportunities on the front nine that could have changed the outcome considerably. Rahm was roaring down the stretch hitting spectacular drives and holing putts to get to 11 under.  If the tournament had continued for another 9 holes, Rahm had so much momentum that I believe he would have prevailed. Jordan Speith was right there in contention as he seemed determined to make a run at the leaders but he also struggled on the opening holes. Speith had missed a short 3 foot putt on the 18th hole to complete the 3rd round and it ignited a need to get to the practice putting green right after he signed his scorecard on Saturday. He eventually left the course with putter in tow and perhaps spent the evening completely focused on his putting stroke. He would make a lot of noise on this Sunday. 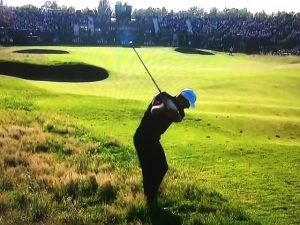 Speith blasts out of the rough on 18

The course was defenseless as the conditions were ripe for scoring as the weather was uncharacteristically benign for an Open Championship. There was no wind and players could be aggressive and go after the pins irrespective as how the R&A set up the course for the final round. You could have mistaken RSG for the TPC in Scottsdale, Arizona. The front nine at Royal St. Georges is important because the opening holes 1-5 are the toughest on the course. Throughout the tournament the players had trouble getting the ball on the fairway on the first hole and any misses here would land in some very troublesome rough. Holes 1-5 were a cumulative 200 strokes over par with the rest of the course playing under par. In the final round, the entire field was net under par at a stroke average of just above 68.  Morikawa took the lead on the eighth hole and his focus and concentration seemed to reach a new level. It seemed that he didn’t look ahead and focused on one shot at a time–I felt that his concentration reminded me of Tiger Woods and Jack Nicklaus and his pace of play was even keel–select the target and execute. Morikawa  had missed a number of makable putts in the preceding three rounds and hasn’t been an outstanding putter on the PGA tour in 2021 but this was a major championship and you could throw all the statistics out the window. On Sunday, he made all the putts he needed to and walked off with the Claret Jug.