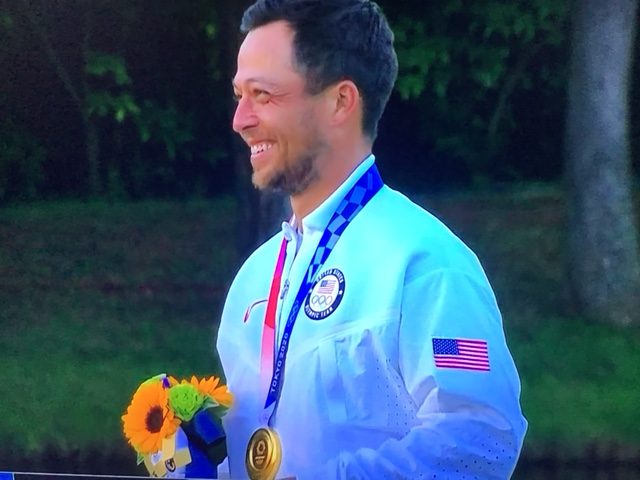 Golf at the Olympics seems to be an affair that is out of touch with the general notion of the Olympic idea with amateur open competition. Olympic golf really resembles another stop on the PGA Tour with the luster of competing for country and the resultant medals. It bears more similarity to the Ryder Cup in the sense of competing for your country without the jingoism behavior of the fans.  Aha…no fans at these Olympics, so the Olympic tournament could have just have been a practice round in Tennessee with the Japanese traditional summer of high heat and high humidity. If you’ve ever been to Japan this time of year, you know that the millions of cicadas are in full force and would be the loudest sound on the course. Playing golf in Japan this time of year requires at least one extra shirt in the bag and a lot of Gatorade. The venue for the event was the venerable Kasumigaseki Country Club (“KCC’).  KCC is one of the most prestigious clubs in Japan and the host of many professional and amateur events. The club was closed to members for two months prior to the Olympics as it is the Japanese culture to pull out all the stops to create a perfect venue.  Conversely, closing a private course to members in the United States for two months would cause a complete riot and revolt.  Typically US courses are closed to members for a period of 1-2 weeks before a major event with the exception of Augusta National, which doesn’t conform to any norms of course preparation as the Masters venue is probably the best in the world.The East Course of KCC has a slope of 131, which is pretty easy for professionals and low handicappers and opened up the opportunity for a birdie fest.  By comparison, the slope of Pebble Beach is 145 and Pine Valley is 155. 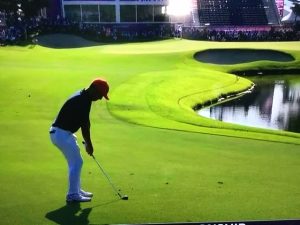 The final round began with Schauffele holding a small lead over a battalion of competitors. The hot, humid Japanese summer enables the ball to go farther and KCC was set for a plethora of birdie opportunities for those drives that found the fairway.  Even drives in the fairway bunkers didn’t pose much of a problem for the players who were able to hit most of the greens in regulation. Rory Sabbatini representing Slovenia got really hot and shot a final round 61 to reach 17 under par. Schauffele was cruising along at 18 under playing with home town favorite Hideki Matsuyana and the UK’s Paul Casey.

Schauffele wanted this tournament and gold medal badly.  He has faltered with 54 hole leads in the past and this was a big stage for him representing his country and his own Japanese heritage as his mother born in Taiwan was raised in Japan. The 14th hole would prove to be pivotal in whether he would succeed or fold up under the pressure of the event. Schauffele’s drive on 14 sliced right into the woods on the relatively easy par 5.  There was a question whether if the ball would even be findable. The ball was miraculously found in the brush under a tree and certainly unplayable. Schauffele took the unplayable penalty but his drop was no bargain. He had no shot to the green and had to hope to get enough club on the ball to advance where he might be able to get up and down for a par.  The shot was very difficult as his backswing would have to come into contact with the trees. (We all have had this type of shot and I would submit that the anticipated contact with the trees makes the shot twice as difficult). His gap wedge was pretty good but he almost muffed his approach shot and faced double bogey. His approach shot to the green completely offset the “muff” and he holed the putt for a remarkable bogey. Schauffele was not going to be denied after this hole with Sabbatini on the driving range hoping for a playoff or better tied for the lead. Schauffele then birdied 17 with a terrific bunker shot on the short par 4. One by one all the other competitors could get no closer than 15  under par including Rory McIlroy and Colin Morakawa. Then it happened again, Schauffele pushed his tee shot  to the right on the difficult par 4 18th hole–he had no shot to the green and had to pitch out, which he was able to do to 98 yards. Up and down for the gold medal would be required–his pitch shot was the shot of his career as backspin caused the ball to stop 4 ft. from the hole for the putt to win. It was almost surreal to assess Schauffele’s demeanor. He dug down deep and overcome the adversity and raised his confidence level to the point where he felt he just couldn’t lose this tournament. His father, Stephan, was interviewed with joy and summarized it nicely, “He is one tough dude.” 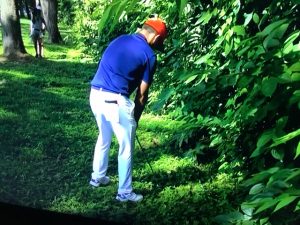 Critical chip out on the 14th hole

Unlike any other golf competition, the Olympics awards three medals. Rory Sabbatini locked up the Silver Medal with his 61 and 17 under par. There were 7 players tied for third at 15 under including Matsuyama, Morakawa, Paul Casey and McIlroy and a 7 way playoff woud begin. Unfortunately for the home favorite, Matsuyama would miss more short putts that he would care to remember and bowed out quickly to the disappointment of the home fans. It all came down to CT Pan and Morikawa after both guys made birdies with spectacular approach shots. It came down to CT Pan holing an 8 foot putt par for par after an indifferent chip on the 18th hole. Morikawa had 185 yards to the hole in a pretty good position but his iron shot buried in the top of the greenside bunker on the right. Probably the most difficult shot in golf, Morikawa did well to extricate the ball out of the bunker (only 20% of the ball at best was visible) but was over 20 ft for his par putt which he could not make. The bronze would be awarded to CT Pan who shot 63 in the final round to get into the playoff. 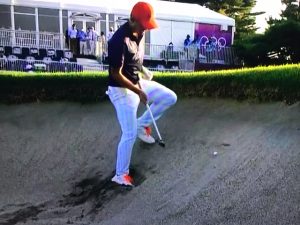 Fried egg at the 18th hole

There was a lot of drama in this final round and I’m sure that Matsuyama might have done better with the home crowd cheering him on but it was not to be. This gold medal belongs to Xander Schauffle. He earned it with a brilliant display of grit and determination.

I’m not sure Olympic golf makes sense in its current configuration. There should be some consideration to having golf as an all amateur event with a USGA amateur championship format of stroke play qualifying and match play competition.