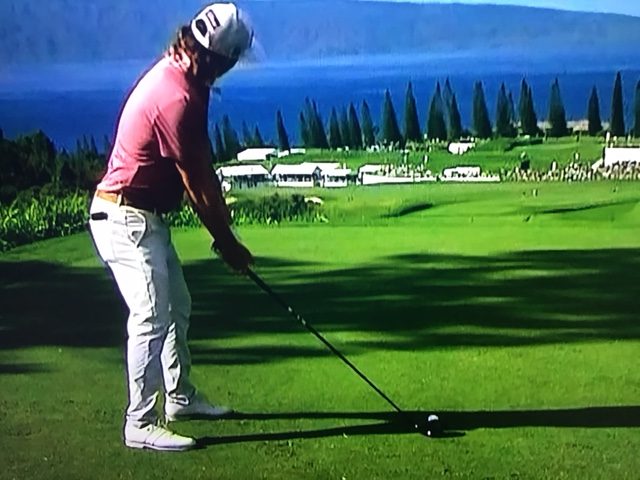 The first PGA event in Kapalua, Hawaii kicked off this week on the Plantation Course.  Plantation is not an easy course but the week’s course conditions  turned the venue into a delicious meal for the Tour Professionals.  With three rounds in the books, the players  uniformly “murdered” the course with a barrage of birdies.  The 38 players in the field were a cumulative over 500 strokes under par through the third round.    The Plantation tees are 7600 yards and the course has a slope rating of 144 and a par of 73.   The way the course was playing this week, the course rating for these professionals was probably closer to 114.   Usually, trade winds of 20 mpg. or more are typical conditions for this golf course.  This week there was  no wind and the course was very soft caused by significant rainfall that preceded the event.  Without trade winds, soft greens and wide fairways enabling  the professionals the opportunity to take dead aim at everything.  Birdies were  being made from approach shots that are inside of 10 ft. as many of the players are hitting wedges into soft greens.   Although the course plays  7,600 yards, this length means nothing to professionals that are driving the ball over 300 yards.

The tournament was decided by the putter since conditions did not change for the final round and another birdie fest  ensued.    There were a number of players that were 7 shots back of leaders Cameron Smith and Jon Rahm who were both 26 under par at the start of the round.  .  Rahm and Justin Thomas both shot 61 in the third round with these two guys setting the course record on the same day.  Phil Mickelsen was around for awhile but succumbed to a few errant tee shots at the end of the second round and was near  the bottom of the pack.

The final round was more of the same.  It was a duel between Cameron Smith and Jon Rahm who were not going to succumb to the field.  It is amazing to see what golf professionals can do in pristine scoring conditions.  Both Smith and Rahm understood that the birdie barrage would have to continue to reach the winner’s circle.  The final round was principally a match play duel between the two.   Matt Jones made it interesting after an eagle 3 on the 15th hole as he shot  61 to finish third at 32 under.  Can you imagine shooting 61, be 32 under par and finish 3rd in the event?  Colin Morakawa shot 62 to finish tied for 5th with an “ordinary” score of 25 under.  Smith and Rahm dueled all the way but Rahm could never get over the hump after Smith birdied the fourth hole.  Smith’s putter was just a bit hotter than anybody else as he take full advantage of the easy conditions.  Smith’s 34 under was a record for an event on the PGA Tour eclipsing the previous record of 31 under by Ernie Els in the same event.  For the PGA professional, the week in Kapalua was heaven on earth.

I understand that the course conditions were superb for the field and they took full advantage of it.  I’m not a big fan of the birdie festival as I believe it impairs the reputation of the golf course.  This is a tough golf course for the resort guest and the general public   Plantation has tees for all skill levels but it demands accuracy to the greens as there are a lot of jungle carries to navigate.  These areas rarely come into play for the professionals especially with no wind.   Golf fans are generally mixed about scoring, a number of us like tough courses, high rough and scores that winners are in single digits under par.  Other fans like the birdies and the skills that these PGA professionals can exhibit if conditions are ripe.  Those events are usually determined by the putter and although Cameron Smith played almost flawlessly tee to green, but it was the putter that delivered the one shot victory over Rahm. 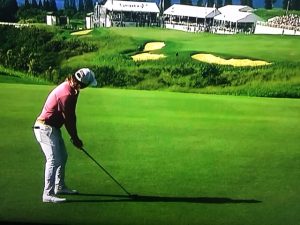 I would add a bunch of bunkers on the Plantation course to welcome the booming 300 yard drive.  The downside to doing that is that it would make the course too difficult for the resort player.  I get a sense that the 25th edition of the tournament  will be no different–perhaps the trade winds will return and blow hard to pose a greater challenge to these players.