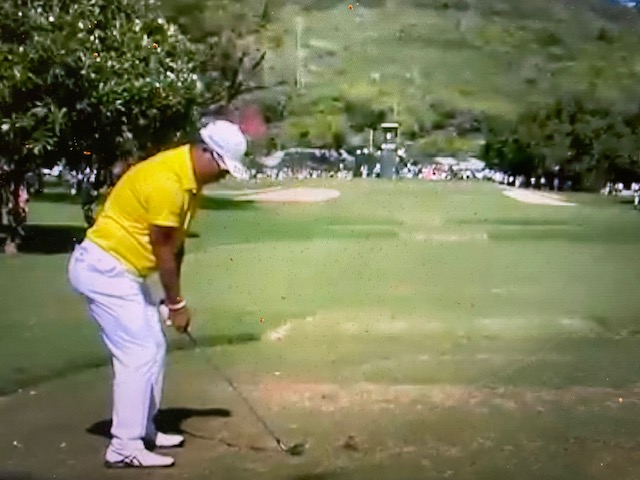 Hideki Matsuyama came from behind and defeated Russell Henley  on the first extra hole of a playoff at Waialae Country Club completing the Hawaii swing of the PGA Tour.    Matsuyama took the event beating Henley with his power game-a shot for the ages in the playoff as Matsuyama smashed a three-wood 278 yards to 3 feet for a cinching eagle to win the event.  Matsuyama simply overpowered Henley catching him with a closing birdie on the 18th hole to force the playoff.  Matsuyama has clearly established himself as the greatest Japanese  golfing professional of all time with his 8th PGA Tour victory and vaulted him to the top of the 2022 Fed Ex Cup standings.  Matsuyama’s game has always been pretty solid but his recent success has come from significant improvement with the putter.  It’s clear that the putter is the ultimate weapon on the PGA Tour, which is not a big surprise as the players continue to assault the golf course with the power game.  Matsuyama and Henley finished the event at 23 under, which compares pretty favorably with last week’s 34 under at Kapalua.  Kapalua played to a par 73 while Waialae played to par 72.  Henley held a five shot lead with nine holes to go  before Matsuyama began his assault on the back nine shooting 31 and a final round 63.  In this event, Henley did not lose the event, Matsuyama’s won this event with the great back nine and jaw dropping 3 wood in the playoff.  He has now the greatest Japanese PGA professional since Isao Aoki.

There were a few new comments, including some commentary from Jack Nicklaus,  about dialing back the golf back to reduce the distance these balls travel as we’re now seeing some drives approach 375-400 yards.  I don’t believe the ball controversy is going to get resolved anytime soon as amateurs are now belting drives 250-300 yards in their Sunday fourballs.  Therefore, I think its time to change the dimensions of the golf course for the PGA players.  Golf courses such as Augusta and many other famous venues pushed their tees back in the last five years with little to no impact on the game or the scoring.  I would start thinking about the following standards:

On this basis, the professionals would face a golf course that is a standard length of 8600 yards.  This recommendation sounds pretty extreme and could be modified somewhat but I think a minimum length of 8200 yards will still produce sub par PGA rounds. The golf clubs will protest that they can’t lengthen their tee boxes and that’s probably true but bunkers can be dug up and relocated to the “new” landing areas.  Royal Birkdale is an excellent example of defending the course with great placement of bunkers that the players have to avoid bringing strategic shot-making back into the game.   Professionals are hitting fairway woods 300 yards routinely today.  Today, almost every par 5 on the PGA Tour presents an eagle opportunity whereby the professional can reach the green with a hybrid club or even 4-5 irons in some cases.   I believe we have to bring shot-making back into the game and reduce the impact of raw power in the game.  Today’s golf ball is to golf what the aluminum bat is to baseball.  If Major League Baseball used the aluminum bat, I suspect that 75 home runs would be a normal achievement for the league leaders.  Titleist, the market leader in golf ball production, has no economic interest in dialing back the ball especially with the amateur player achieving new found distance.  Equipment improvements help also but the ball is the major factor in reducing these golf courses to birdie fests.  I would not attack the golf equipment providers since most professionals have clubs that have been adjusted for their individual swings and customized in ways that most amateurs couldn’t even contemplate.  Equipment improvements are also good for the game as it gives the amateur a psychological if not a realistic boost to their potential capability.

The Tour moves to the next birdie fest at PGA West in Southern California where scores will continue to resemble the Hawaiian results.  The first round of the American Express is complete at La Quinta Country Club and guess what–the leaders are already 10 under par.