Scheffler Chips Away to a Masters Victory 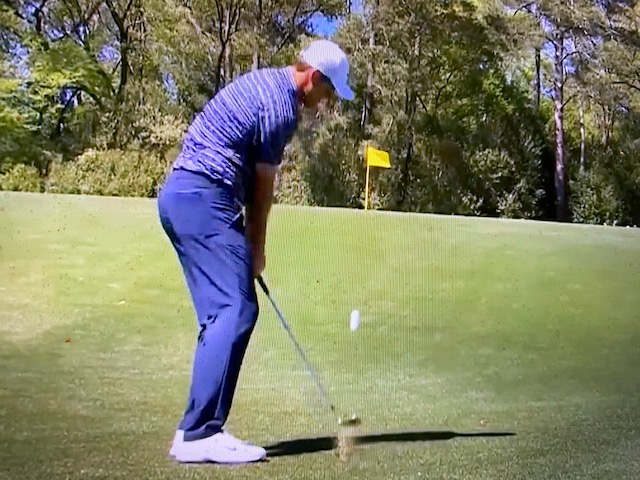 Scottie Scheffler was a wreck coming into the final round wondering if he could really finish the deal at Augusta.  He had a pretty comfortable lead coming into the final round but history tells us that if you’re within 5 shots at the beginning of the back nine on Sunday, you will have a chance. Scheffler’s long game is a power fade and he doesn’t seem comfortable with moving the ball from right to left.  As he came to the 18th hole on Saturday, it would seem that his strength would come into play as the hole demands a power fade, but then the double cross – he smashed his tee shot way left into the bushes. It was a small miracle that the ball was even found but the ball was close enough to getting a clean lie after taking an unplayable penalty stroke, he smashed a 3 iron over the green and hit a remarkable chip to a position where he made an improbable bogey. Nevertheless the memories of that swing on 18 had to come into his thinking after dinner Saturday night. All of us re-calibrate our games of the day and have a tendency to think about our misses rather than our makes. Cam Smith was three shots back and was now in the thick of the fight. The weather had been a factor for the first three days with cool temperatures and gusty winds. Wind is always a problem at the Masters and Sunday would be no different. Only a few players were under par and a number of the top stars of the game missed the cut including DeChambeau, Schauffele, Speith, Koepka and Molinari. 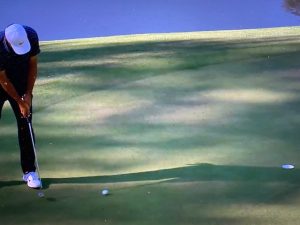 Holes another putt on 12

It seemed that Sunday would be match play between Scheffler and Smith as the others could only catch up if both of these players came backwards. Smith birdied the first two holes cutting Scheffler’s lead to one–game on! Smith then misses his tee shot to the left on the third hole giving Scheffler an opening. Scheffler then hits another tee ball left (not quite as bad as 18 on Saturday) into trouble joining Smith trouble on the left. Scheffler gets a drop from the scoreboard and hits an indifferent shot about 30 yards from the hole. Smith gets an opening but he too hits and indifferent chip shot a little closer to the green than Scheffler. The opportunity for the two to be tied after this hole seemed to be a distinct possibility and then lightning strikes. Scheffler holes the chip shot for birdie to get to 10 under par. In match play, you never underestimate what your competitor can execute irrespective of how bad a position this. Smith seemed confounded by Scheffler’s birdie and his chip shot went sailing by the hole and he could not get down for par. Instead of being tied for the lead, Smith now found himself 4 shots back with a 3 shot swing on one hole. Scheffler’s driver swing returned after this hole and he started striping the ball  300 yards down the fairway and was never in serious trouble after this. The tournament was essentially over at this point. Smith made a wonderful birdie on the difficult 11th hole to cut the lead to 3-maybe there was one chance left. Smith went to the 12th–Golden Bell–the hole of death that has felled so many players over the years that you probably could write a complete book on the hole. Smith had a little spring to his step and then made the same mistake that a number of his predecessors had made so many times before. 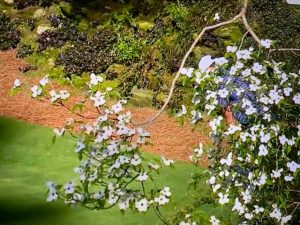 Chipping from the bushes on 12

The year 2019 when Tiger won the Masters, the leader, Francisco Molinari and contender, Tony Finau dunked their balls into the pond. I would say that you never go after the Sunday pin. Hit the 8 iron into the fat part of the green on the left, two putt, take your par and resume your aggressive play for birdies on the 13th and 15th holes. Smith grabbed a 9 iron and thwacked the ball into the pond-the watery grave which ended his chances for victory. It was the worst swing he made all week and you can’t help to think that the gods of golf have cursed this hole for those that dare to go pin-seeking on Sunday Scheffler was unnerved watching this result and grabbed a 9 iron and smashed his shot left off the green. Another terrific chip resulted in a one putt part and this would be the end of Smith. Was anybody out there to contend? There were roars up ahead as Rory McIlory was putting together a record score for the final round of the Masters getting through the front nine in 32. McIlroy continued to rally with an eagle on 13 and would post a final round 64 but he would run out of holes. He capped off his Masters by holing out his bunker shot on 18 for a double-sandy birdie. Colin Morikawa would then hole out his bunker shot right after McIlroy for a final round 67 to finish 5th. Consecutive bunker shots holed on the 18th hole has to be a new first in the history of the Masters. Scheffler was still a wreck realizing what he was about to achieve and played a little patty cake with his putter on the 18th green but this huge victory was his and his putting and chipping were huge factors in his success. He is on a pretty significant run  and it will be interesting if he can maintain this momentum moving into the final 3 majors. Scheffler has surprised a lot of people in the game. Everybody knows that he has a ton of talent but 4 wins in the last six outings including a significant major-I haven’t seen a player chip the ball and get up and down from all sorts of terrible places throughout this run.

Much has been written about Tiger Woods’ performance and it is a significant event in sport that Tiger was able to make the cut and play all the shots. Tee to green, Woods was solid throughout the four rounds. He never got the feel of the greens after the first round but it’s a lot to ask someone who hadn’t played a competitive round of golf on Tour in over a year.  His performance was truly remarkable and there isn’t another player that could have met this challenge.  Tiger ignites the spirit of golf and let’s all hope and he can continue on his road to recovery and continue to grace his presence in these events.

← Tiger "Masters" the First Round Jordan Speith Wins the Heritage →