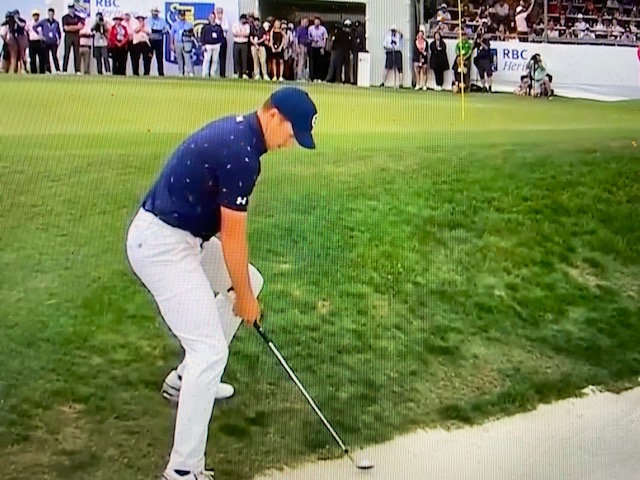 Jordan Speith came into the Heritage Classic looking for answers.  He was completely unhappy and perhaps befuddled  with his play at Augusta, where he missed the cut.  His putting stroke seems to have a series of issues and can wreak havoc with the confidence required to compete on the big tour.  Speith has been successful on tour because he has an inner passion for the game that recognizes his strengths and weaknesses and is always working on continuous improvement.  While he is not alone or unique in the life of a golf professional, he seems to be differentiated by continuous self assessment and understanding of where his game is combined with a team approach to his profession with his caddy and his family. He has had a few tough years yet he continues to bounce back and this type of support structure enables him to wade through the ups and the downs.  He doesn’t have the length of most players on tour but he is competitive and can be “sneaky” long.  During the tournament, his ball striking tee to green was very good but the putts weren’t dropping and it appeared that his troubles with the flat stick would continue to weigh on his scoring.

Through three rounds, Speith was in a pack of a crowded field chasing the leader Harold Varner who shot 63 (-8) vaulting himself into the Sunday pole position at 10 under par.  It would seem that it might take 14 or 15 under par to win this event but as it seems to happen every year on Sunday afternoon at Harbour Town, the winds off Calibouge Sound became to effect club selections and birdies were nowhere to be found by the pack coming in.  Shane Lowry looked to be the “man” until his double bogey on the 14th hole with a series of sprayed shots and was fortunate to make par on the par 5 15th, which was his last realistic chance for birdie.  Sepp Straka also looked to be in great position  but was stymied with his bogey on 18 to finish a shot back.  Patrick Cantlay had the best chance to win when he birdied the 17th hole and would have a great opportunity at the 18th hole as he birdied 18 in all three preceding rounds.  Speith had finished in the clubhouse at 13 under probably anticipating that someone would catch him and probably pass him for the victory.  Nevertheless, he had to hang around and as he headed to the range, a large group of young autograph seekers awaited him.  He addressed them by saying he couldn’t sign right now but that it he would return to sign-if there was a playoff, it might take longer or shorter if somebody surpassed him.  The kids knew that his commitment was genuine so they stood pat in their place near the scoring facility.  The stage was set for the 18th hole. 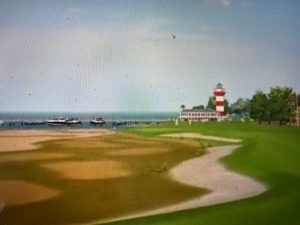 It seems to me that the 18th hole at Harbor Town seems to be the deciding factor almost every year in this event.  It also seems that on a Sunday afternoon at 3PM in late April in Calibogue Sound in South Carolina, the wind comes up and blows a little harder than it has in the prior three days.  The hole plays as a 472 yard, par 4 with the marshland cutting into the fairway at roughly the 320 yard mark so most of the players will hit 3 woods to a spot on the fairway, where they can go at the flag.  There are bunkers that protect the green over the marshland with the most important one being the front bunker that guards the green.  A miss to the right will require a very precise and perhaps lucky wedge shot to get close enough for par.  Speith played his way into his position with an indifferent tee shot, a six iron to 12 feet and then he drained the putt for an improbable birdie-especially the way he had been putting throughout the week.  Now Cantlay had a chance to seal the deal and he hit a three wood to an ideal spot in the fairway and knocked the ball on the green but he missed the putt to win and now a playoff would ensue. 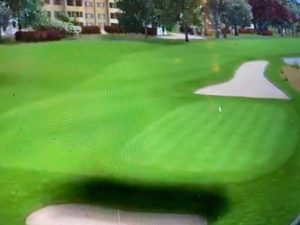 In the playoff’s first hole, the 18th, Speith drove the ball in the fairway and then the wisp of wind came out and his approach shot landed in the front bunker.  Advantage Cantlay-Cantlay then hit another 3 wood in the middle of the fairway and had 179 yards to the flag.  He chose a 9 iron as he had just done about 30 minutes before but this time, the winds of Calibogue blew a little bit harder and his shot also landed in the front bunker.  The height of the shot with a 9 iron produced a “fried egg” lie in the bunker, which would make almost impossible to stop.  Speith had a 56 ft. bunker shot with a clean lie and almost holed it  to inches for an easy tap in par.  Cantlay had no such luck, the lie was horrible and he splashed it out to about 40 ft. with an impossible putt that had to be made, which he missed,  and the tournament belonged to Speith.  It was not an outcome that Speith expected but a win is a win!  The victory was reminiscent of another one of Speith’s victories at the Traveler’s in Hartford where he holed a bunker shot on 18 to win the tournament.  Speith believes in his short game and has demonstrated his prowess time and time again despite the slumps of a balky putter.  By the way, Speith returned to the spot where the kids were anxiously waiting for his autograph and he accommodated all of them in his plaid sportcoat awarded to the winner of the Heritage.  Easter Sunday is becoming a special holiday for Speith as this victory is his second in a row on Easter Sunday and his first as a new father.  This tournament really reflected the essence of how great the game of golf can be.