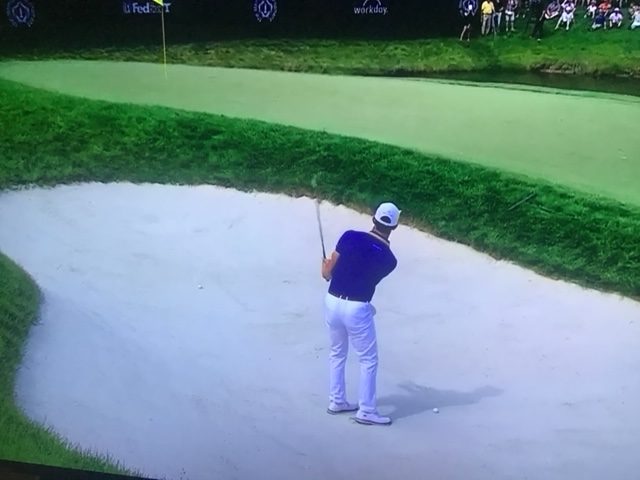 With all the attention paid to the beginnings of the LIV Tour in London, Billy Horschel scored an impressive victory under the watchful scrutiny of Jack Nicklaus at the Memorial Tournament in Dublin, Ohio at the course that Jack built.  Horschel is a grizzled veteran that has been competitive in many PGA events and the Memorial was victory No. 7 for Horschel.  Horschel held off  Aaron Wise and Joankyim Niemann all day on Sunday after taking the 54 hole lead into Sunday.  The golf course just seemed  to be too difficult for the challengers who would make runs up the leaderboard but could get no closer than 2 shots from Horschel.  Horschel is a “feel” player and his timing and focus is extremely important for him to maintain consistency.  You might say that this is important to any PGA professional and it is but it’s more important for Horscel since any lapses or excursions usually results in a loss of focus and difficulty. He can also be an emotional player as he started to lose it a bit at the beginning of the back nine but his putting remained steady throughout the tournament and especially on the back nine on Sunday.  He holed a number of six to eight foot putts for pars that buttressed his ability to hold off his pursuers.  A long eagle putt on 15 (52 ft) all but secured what turned out to be a 4 shot victory.  Horshel’s bogey putt on the difficult par 3, 12th was as important as any other putt he would make during the round.  The field was unable to overcome Horschel’s five shot lead going into Sunday as Muirfield Village is not the type of venue that is going to yield a number of low scores.  Wise got within 2 shots of Horschel on the back nine but the course is just a bit too difficult to make up the kind of margin that Horschel commanded.

The signature hole at Muirfield Village is the par 3, 12th hole, which played 186 yards on Sunday.  It reminds you immediately of Augusta National’s Golden Bell, 12th hole. At Augusta, the major issue is the wind and where to land the ball, cover the pond and avoid the bunkers in front and back.  At Muirfield, the hazards are the same but the hole is extremely narrow as Golden Bell is horizontal.  At Muirfield, the water is on the right and will take care of a pulled tee shot or potentially a bad bunker shot as the bunkers are on the left side running away from the player toward the water.  Horschel dumped his tee shot into the sand and hit an indifferent bunker shot into the spinach on the side of the hole. The bunker shot is intimidating, even for a professional, as a shot out of this bunker is going to head directionally into the pond.   A big number was possible, which would have brought the field back into contention.  Horschel’s pitch shot out of the spinach was at least 6 feet from the hole and he managed to hole that putt for a well earned (what we call) good bogey.  With this major obstacle out of the way, Horschel went on cruise control towards victory as his competition also flailed at this hole 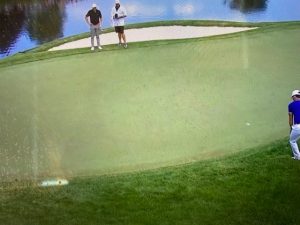 Bunker shot at the 12th

Rory McIlroy ended his victory drought with a decisive victory at the Canadian Open.  It was McIlroy’s 21st PGA Tour victory and he really wanted it and made all the necessary shots to make it happen.  McIlroy is very unhappy with LIV Tour dynamics and stated that this victory enabled him to pass Greg Norman on the all time victory list in a terse pointed comment following his victory.  McIlroy shot 62 in the final round with a variety of tantalizing chip shots and putts to secure the victory over Justin Thomas.and Tony Finau.  Justin Rose had a 10 under round of 60 to finished tied for fourth place with a barrage of birdies and eagles.  The leaders simply didn’t falter enough for Rose to contend but it was certainly one of the best (if not the best) round of golf played on tour in 2022.  McIlroy has a different look in the past few weeks and he seemed positioned to win this event.  He seems to be more focused on the entirety of his approach to the game.  In the past few years, when he moved out of contention, he would seem to be disinterested and placid.  This week he went after the pins and scored and his pitch shots around the greens were very precise and sharp.  Nevertheless, Thomas dueled with McIlroy until the end and it wasn’t over until Thomas bogeyed 17 and McIlroy birdied it for a two shot cushion.  Tony Finau snaked a 42 footer on the 18th to finish alone in 2nd place.  McIlroy will be a strong contender in the upcoming US Open at the Country Club in Brookline, Massachusetts this week.

As predicted, the renegade LIV Tour and it’s head sheik, Greg Norman, is shaking the professional golf world to the point of distraction.  LIV players are behaving like mercenary soldiers who are taking orders from the authority–given the money involved–you could interpret that the renegades as mercenaries and essentially public relations pawns–albeit very well paid pawns.  It’s embarrassing how this guys are responding to questions–“I don’t focus on where the money is coming from, I never have.”  This situation has caused quite a stir among golf fans all over and seems to reflect what is going on in our society.  Money and power are more important than competition and values–the bottomless pit which is the Saudi treasury is not the way to treat the game of golf.  Golf is so much more important than these things but the game itself is being lost in the wave of controversy that this activity is supposed to promote.  I’m personally disappointed with Bryson DeChambeau’s decision to defect to the new tour.  He has the capability to play with the best in the world and his reputation as a seasoned veteran got off to a great start but I believe his star will dim as I doubt there will be much publicity surrounding performance on this tour where you don’t need to make a cut to generate a paycheck.  DeChambeau is probably also betting on being able to return to the PGA Tour if things don’t work out as planned.  I doubt that this option will be available.

There isn’t been much talk about the Saudi’s giving up on this idea as I believe they will soon discover that this tour will worsen their image in the world.  I wonder what would happen to these guys if the Saudi’s decided to renege on their financial commitments at some point.  Suppose that the value of their enormous participation bonuses become the current value of cryptocurrency.  The price of oil continues to rise but if the Ukraine war ends, and the US rekindles domestic energy investment and consumers decide that they’re not going to commute to work perhaps the Saudi treasury will rethink this idea of using golf to improve their image.  Most people would state that the items mentioned in the prior sentence are pollyanish and low probability.    Just one year ago,  the price of Exxon Mobil stock was $40 and the fossil fuel business was “toast.”  I certainly wouldn’t bet my family’s future on these guys but continuous media frenzy detracts from the game.  Brooks Koepka is already weary of LIV stating that it detracts from this week’s US Open, which should be a spectacular event.  I like McIlroy’s chances in the Open as well as Jon Rahm.  These guys are pretty focused as McIlroy is on fire coming into the event and Rahm is overdue.  Hopefully, Brookline will be front and center this week instead of the Saudi soap opera.