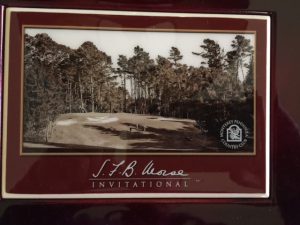 One of the signature events of Monterrey Peninsula Country Club starts today, 5/19, and ends tomorrow 5/20.  It is a two man one best ball  better ball  net event.  This means that the team score is the best ball of the two considering handicap (net).  This is a common format for team tournament events.  We have to go back a few years to chronicle one of the worst things that can happen to a team.  The names of the players here will remain anonymous. We’ll call them Dick and Jack for purposes of this story.

Dick has a 14 handicap and Jack is a 10.  After 71 holes, the team finds themselves in first place in the tournament with one hole to play.  The hole being played is really not relevant for this story but Dick has a stroke on this hole but Jack does not.  The worst thing about a situation like this is knowing your standing in the event instead of just playing it out.  They know they merely have to make a par 4 (net) to win the tournament.  These guys, like most of us, are not tour professionals and while, as amateurs, we primarily play for pride-for some reason-pressure mounts.  The best thing about a situation like this would be to not know where you stand in an amateur tournament.  I can understand that a professional would like to know where he or she stands in trying to win a PGA or LPGA event.  I remember my son, Ian, and I won a golf tournament by holing a sand shot on the 18th hole of the event for a birdie and winning by one shot.  We had no idea where we stood at the time.  For Dick and Jack, this was it–Jack made a bogie and with no stroke it was up to Dick.  Dick was just off the green so three shots from here with his stroke would win the event.  So what happened???  As luck would have it, Dick skulled his chip shot across the green and the ball hit their golf cart resulting in an automatic one shot penalty.  With another chip and two putts, Dick made a six, net 5 and the team lost the tournament by a shot.  Unlike professionals who have to play golf for a living, it’s highly unlikely that Dick and Jack will ever be as close to winning this event again.  The gods of Golf can be cruel.

Meanwhile Team Bronson couldn’t putt or chip today so Day 1 of the 2017 was a disappointment.  We played very well from tee to green despite being intimidated by having to play from the back tees at 6,600 yards.  Putting was awful today and unlike usual play where one team member has a better putting day than the other, we both had bad days.  I don’t think I ever scored so poorly and played so well.  Tomorrow is another day.  We couldn’t duplicate yesterday’s stellar play when we shot 135 (70 gross and 65 net).

← The Business of Golf Morse Invitational-Day 2 →