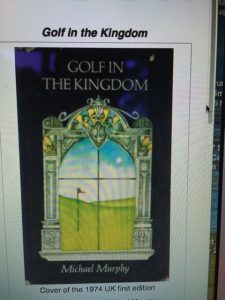 I decided with all the swing changes I’m trying to implement in a quest to catch up my driving distance with my playing partners, that it was time to reread Murphy’s, “Golf in the Kingdom.”  I came to the conclusion that there is a very enjoyable part of the book, which is the round of golf with Shivas Irons; and there is the second part, which gave me a headache.  Additional reads haven’t changed my opinion of the book.

Burningbush Golf Links is the surrogate golf course for the Old Course at St. Andrews.  Murphy shows up at Burningbush Links looking for a game without any equipment or golf shoes.  It is exactly the same experience I had for my first round at the Old Course at St. Andrews (the experience is narrated in Golf Chronicles, page 33).  Murphy meets a golf professional who is actually the teaching  professional (Shivas Irons).  Shivas is about  to hit the links with his student, Balie MacIver.  Murphy’s round gets to a tepid start as the ball falls off the tee in the middle of his address (“waggle”).  Shivas’ play is flawless as shots are straight and true with absolute perfect form.  If the Lord had decided to play a round of golf–Shivas would be the model.  He is a perfectionist and highly respectful of the game.  He is also watching Murphy like a hawk; he has the presence and skill to intimidate although he has no intention of doing so.  Murphy makes the great amateur mistake of figuring out what your score might be for the round without thinking about the task to actually execute it.  He doesn’t count the first ball that fell off the tee as a stroke (the new Rules of Golf do not count that type of stroke) and records a par for the first hole; but Shivas tells him it’s a five with that stroke.  For me, that’s the end of the round for Murphy-he starts over thinking shots and the scores begin to mount.  A playing partner that has corrected your score from your error is a massive distraction in the game in that your integrity is subliminally being impugned.  MacIver trudges along as the compliant student listening to the master and placing the ball in the fairway with every shot.  There is such a disparity in skill between the three players that it seems it would be very uncomfortable to be in that group.  Shivas Irons is the perfectionist: he has the golf swing, the talent, the knowledge of the swing and he knows it.  What is lacking is the empathy for those mere mortals such as Murphy (a fine player himself) that have some skill at the game but are not pure.  Shivas Irons is a 10 on the scale of 10.  His skills, appreciation and knowledge of the game are to be admired but impossible to emulate.  This lack of empathy impacts Murphy significantly throughout the round and allows negative thoughts to creep into his psyche.  Murphy places Shivas Irons on a pedestal that is deserved yet undeserved–the advice, comments and banter that Irons uses throughout the round is having a negative influence on Murphy’s ability to concentrate and execute shots.  MacIver is the “rock” of the round-he is not good enough to understand all of Shivas Irons’ comments.  He is just following instructions and doing the very best that he can in the circumstances and he’s enjoying himself.  The problem with Shivas Irons’ behavior is that he is absolutely correct in all aspects of what he is doing and it is so correct that it is maddening and ruining Murphy’s experience.  Shivas doesn’t really care about Murphy’s experience; he wants to teach him how to reach a new standard of performance in the game.  There are no “x outs” in scoring on a golf hole–if you make an 11, write it down on the scorecard-stare at it and be humbled.  Shivas is trying to motivate Murphy to “up his game” irrespective of score.  Murphy seems converted to the ways of Shiva as he yields to the notion of hitting and seeing the ball simultaneously.  One shot at a time without even realizing his score, Murphy matches Shivas Irons with an inward score of 34 (1 under par) after a 42 on the front side for 86.  Shivas shot a nearly flawless round of 67.

I’ve had two different experiences with playing golf with the Shivas Irons of this world and the experience can be very exhilarating or very nauseating.    I once played a round with a professional who was on the Canadian and Asian tour and had decided to quit and become a finance professional with an investment bank.  I played Butler National Golf Club in Chicago on a hot and humid day in July 1999.  He is a tall strapping fellow (over 6′ 4″) and he played from the professional tees at a length of over 7,000 yards.  I couldn’t play from those tees competitively so I played from the men’s regular tees at 6,500 yards.  I marveled as he cranked the drives out into the fairways some 300 yards on average and was having a special day.  He treated us as mere mortals with respect and his good play had a very positive effect on both of us.  He needed a putt on the 18th hole to shoot 59 and he missed it but walked off with a big smile on his face anyway.  The course record is 59.  It was a shame that he had a bogey on the easiest par 5 on the course where even I made par shooting 81 with a set of Butler’s rental clubs.

I’ve also had nauseating experiences with players who are quite cocky and condescending during the round which can have a negative impact on the rest of the group.  The tendency is to over think shots and lose concentration on your game in fear that you’ll disrupt the better player.  The player, just like Shivas, has no feelings of empathy and may even express disgust magnifying the potential for even more negative play.

We’ll explore the metaphysical aspects of these phenomena in a future blog post.