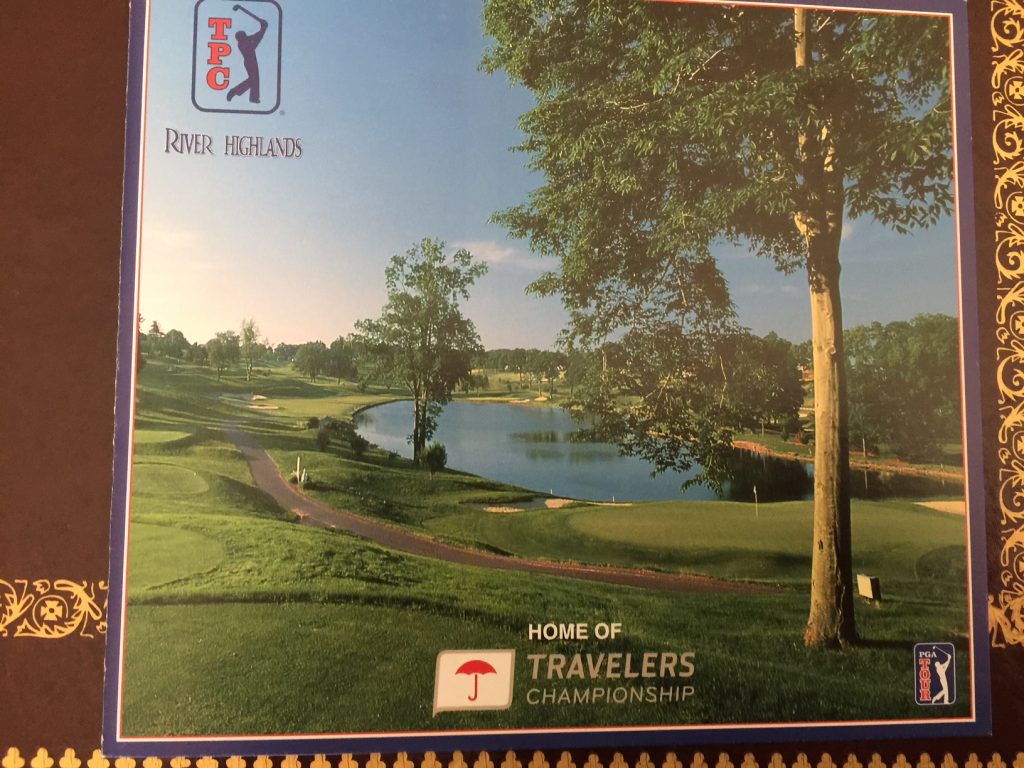 Ok, it’s the first PGA event after the US Open and most golf fans won’t even recognize what’s going on this week on Tour.  In the wake of Brooks Koepka’s victory at Erin Hills, the Tour moves to the staid confines of Cromwell, Connecticut at TPC River Highlands.  I am a Connecticut native, and my brother Richard and I, have played this course many times.  It is one of my favorite venues.  More than a few years ago, Richard and I won a regional tournament event here  in different flights and carted home a nice Waterford bowl.  Unusual to say the least to win and less likely for both of us to win.

Jordan Speith is leading the event after two rounds as his momentum from his final round at Erin Hills has translated into a good 36 hole performance and he’s usually a good front runner so we’ll see if he can come out on top during the weekend.  CBS covers this event on network television and has been doing it for a number of years.  Thank God, we don’t have to listen to another Fox sponsored event after yet another horrible performance by Joe Buck and team at Erin Hills.  The event has been a long held tradition for Connecticut golf fans when it was once called the Greater Hartford Open (GHO) and Sammy Davis, Jr. was the leader of a number of high profile entertainers that sponsored and participated in the event.  While it may not as raucous as the Phoenix Open, the Connecticut golf fans come out of the woodwork in droves to support this tournament enthusiastically.  The TPC at Cromwell became the successor venue a number of years ago nestled in the rural confines of northwestern Connecticut where the most famous neighbor in the vicinity is the University of Connecticut.  The course will yield a significant amount of birdies to the long hitting professionals but it’s a wonderful test for the ordinary player.

I like courses where you have to hit almost every club in your bag during the round and TPC-River Highlands is this type of course.  The course starts with a strong 420 yard par 4 with an uphill second shot to a slanted green that is generous and treacherous at the same time.  My favorite holes are many on the course starting with the par 5, 13th hole of 513 yards with water on the left for about 250 yards.  You have to cover a pond that guards the green on the right for your 3rd shot to the green.  I’m not sure about this but I believe it’s a three shot from the professionals as I believe it plays about 560 yards for them.  I believe there are two candidates for the signature hole on the course.  The par 4, 14th hole of 278 yards is really a par 3 for the professionals who can drive this hole with a three wood.  The problem here is that the green is pretty small and there are hazards everywhere including water through the green.  It’s fun playing this hole as I would typically place a three wood in the fairway (hopefully) and then have a wedge to the green.  The variety of the final holes starting with 13th is what makes this venue the kind of course you could play every day and not tire of it.  The par 3, 15th requires a delicate shot over the pond at 170 yards–it’s medium length requires a high shot to hold the green which is almost rectangular in shape.  The second candidate for the signature hole is the 16th which a par 4 of 400 yards (probably 440 for the professionals) which is shaped like a horseshoe in that your tee shot must land in the fairway giving you a shot of 150-170 yards over the water to a green that doesn’t have a lot of depth.  This is a very tough hole and many a professional has dunked it in the water trying to get close to the pin.  If the wind is up, club selection is a very interesting dilemma.

Ok, outside of Connecticut, they’re probably won’t be a lot of interest in the event but its a great course and perhaps if Speith can keep the lead through 54 holes, it will generate some interest on Sunday.

← U.S. Open-Final Round Speith Wins the Traveler's in Dramatic Fashion →