The Open Championship at Royal Birkdale 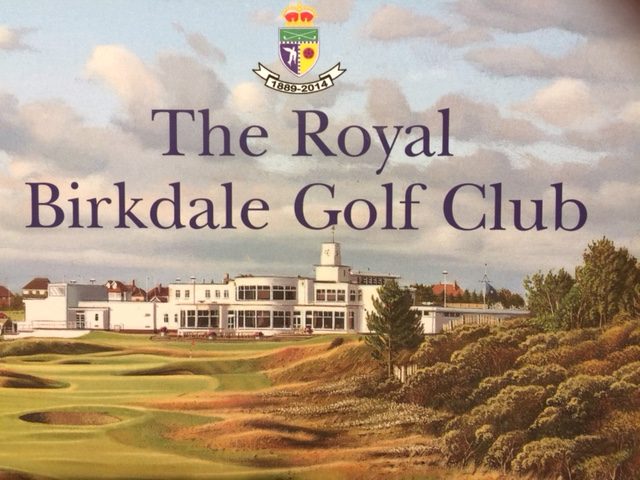 A Bit of History

Birkdale Golf Club was founded on 7/30/1889 at 23 Weld Road, Birkdale.  The subscription price to join the club was about $1.50 and the green fee was about $.50.  The first course was 9 holes and was constructed for a price of about $7.  I doubt much was done in this construction except placing some flags around the holes.  The club was officially opened on 10/5/1889.  Ladies were able to play 3 days/wk. and have always played a prominent role in the operation of the club..

In 1908, 18 holes were measured and drainage was completed the following year.  Golfers would no longer have to play in their wellies (rubber boots).  in 1922 the club tried to buy the links but could not come up with $21,000.  The land was sold to the Southport Corporation and the owners offered a 99 year lease to the golf club.  The clubhouse was completed in 1935.

The Open Championship was scheduled to be played there in 1940 but there was a global conflict going on at the time called World War II and the area was consistently being bombed by the Germans.  The first Open Championship was held at Birkdale was held in 1954.  The King of England bestowed the title “Royal” on the club and it became The Royal Birkdale Golf Club in 1951.

It’s interesting that an Englishman has never won the Open Championship at Royal Birkdale.  The winners are:

In the 1961 event, Arnold Palmer drives the ball under a small bush on the 15th hole (now the 16th).  At a critical time in the Championship, Palmer chooses to go for the green from under the bush which was at best impossible.  Palmer smashes a 6 iron out from under the bush on to the green to preserve his lead.  The shot was so implausible that it is marked by a plaque to commemorate the shot.

In 1969 the Ryder Cup competition ended in a tie when Jack Nicklaus conceded a putt to Tony Jacklin to halve their match at 12-12 which has been memorialized as “the Concession.”  The US team held the cup with the tie but the gesture was a remarkable act of sportsmanship.

I almost made a hole-in-one on the par 3, 4th hole at 206 yards with a 2 iron.  It was the best 2 iron I ever hit in my life and the group on the tee was convinced it was “in.” the hole and were very excited.  I was reserving my excitement for the reality as about 1/4″ of the ball lay over the hole.  The wind was blowing against us so it was never going in.  After 10 seconds, I settled for the birdie 2.  It would have been the highlight of my career.

Okay, my birdie 2 is not famous or even important but it was an unforgettable shot for me.

I want to thank Joseph Shirley, a long-time member of Royal Birkdale for material and insight for this piece.  Thanks to Joe, I got the opportunity to play Birkdale many more times especially with brother Brian (my mentor, good friend and enthusiast as documented in Golf Chronicles.)

More on the Open Championship in the coming days.