Women’s US Open, Cordevalle Renovation and Other Stuff 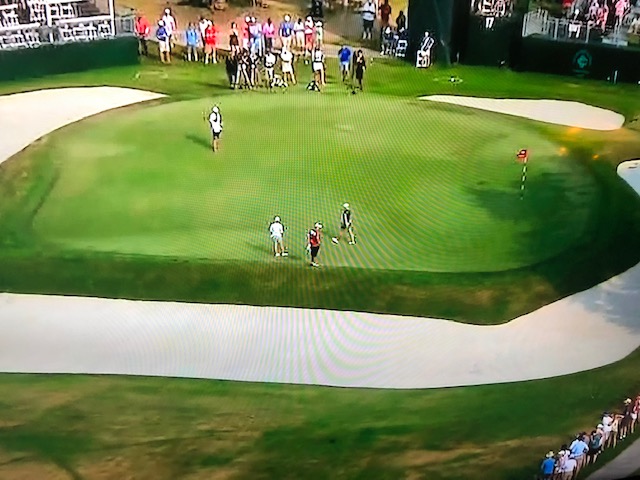 The 2019 edition of the Women’s US Open was played at the Country Club of Charleston in South Carolina.  The course was pristine with slick greens, difficult pin placements and a number of treacherous sloping around the greens reminding me of Pinehurst No. 2.  It seemed to be a test of survival for the players as birdies were few and far between.  Korean golfers continue to dominate the LPGA as the winner, J. Lee is actually one of six J. Lee’s in Korea’s professional golf making her ,J.Lee6 , (I’m sure her birth name doesn’t end in a “6”) which sounds like a new password for your favorite golf app.  It seemed to me that she made the fewest mistakes and actually limped into the victory while bogeying 2 of the last 3 holes,  Lexi Thompson, the US standard bearer, had to be pretty unhappy with her round.  This was a course where her length should have been a big advantage.  She’s at least 50 yards longer than most of the competitors in this event but despite this length, she couldn’t put her short irons (including a number of wedge shots) into positions to make birdies.  She struggled throughout the round and you could tell that she was “grinding.”  It seemed that the more intense she became, the misses on the greens multiplied and she posted a final round 73 with a birdie on the last to finish second in the event.  An even par round would have won the event.  Celine Boutier found herself two shots back at the 15th hole and after Lee who was playing ahead of her bogeyed the 16th, she could have been one shot back.  Celine couldn’t close the deal with bogeys and a double bogey on 18 to finish 5th.

We listened to our first horrible dose of Fox Sports covering the event with Joe Buck, Paul Azinger (recruited from ESPN), and Juli Inkster.  The coverage was worse than horrible as Azinger’s skills are lost with the antics of Buck who seems to know absolutely nothing about golf and seems to be pining for Troy Aikman.  Inkster looked lost, dispassionate and disconnected (what am I doing here anyway?).  Get your MUTE button finger lubricated as the US Open is up next week in Pebble Beach–listening to this trio + Brad Faxon and an improbable list of Foxies will be painful and unacceptable. 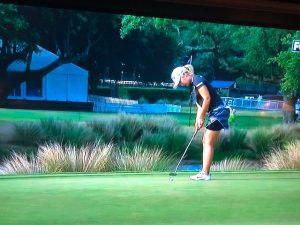 Following the Chalice Cup Championship at Cordevalle in April, the club has embarked at a major upgrade program to redo its greens.  If memory serves, the club is 20 years old and it was time for the upgrade.  The Club hosted the US Women’s Open two years ago and had hosted a PGA event in prior years.  The course is getting a rest and the fairways are in excellent condition.  Play is sporadic as most of us get the opportunity to play from the black tees to temporary greens that are 100 yards from the new greens.  It’s a fast golf round, hit a drive and an iron, chip or putt to the temporary green and move on.  The project is moving right along and it is expected that it will reopen for play on the new greens in mid-July. 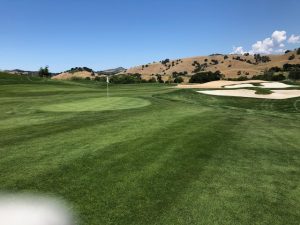 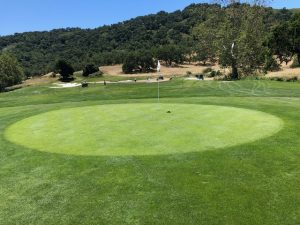 We played the Great River Golf Club in Milford, Connecticut a few weeks ago.   This is a public course owned by Sacred Heart University located in nearby Bridgeport, Connecticut.  The course is a public facility but seems to have the feel of a private club.  The course was in terrific shape and bears none of the characteristics that one usually encounters when playing a public venue.  There are no signs telling you what to do or how to behave on the property. 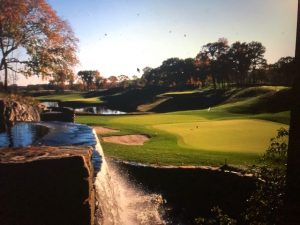 The personnel in the golf shop are actually affable and friendly and seem to want you to enjoy yourself.  The course, driving range and putting greens were in absolutely terrific shape and players were actually teeing off every 10 minutes instead of the usual traffic jam.  Pace of play was monitored carefully but respectfully as we completed our round in a bit more than 4 hours (unheard of on a public facility).  Green fees and ancillary stuff were reasonably priced and there were no ball machines or junk laying around the place.  The course was quite challenging that day with winds blowing at 25-30 mph created quite a test.  The 7th hole is rather daunting as there doesn’t seem a place to hit the tee shot.  There is an immense pond on the right and a cascade of heather on the left.  With the wind in your face and blowing 25 mph, it took 250 yds on the fly to carry the pond into the fairway.  My ancient Taylor Made F7 driver (circa. 1990) wasn’t up for this so I laced a low laser in the middle of all this stuff about 180 yards.  This hole would be a candidate for one of the hardest holes in Golf Chronicles.

We also played a more traditional public facility in Meriden, Connecticut called Timberline Golf Club.  This is more like a the usual public facility but I found it to be a lot of fun.  Players were wearing denim jeans and untucked shirts but the place was 27 holes with a friendly staff who just wanted people to get out and have a good time.  Play was surprisingly quick as we played 9 holes in 2 hours with a foursome.  The course was easy and fun to play–I was impressed with groups who whacked the ball around but kept moving dousing all of my snobbish feelings about public golf.  After our round, we went into the “lunchroom/bar” for a quick bite and encountered the participants in a women’s tournament who were eating, imbibing and waiting for the tournament results.  I was blown away when we were offered a piece of terrific looking strawberry cake with chocolate icing as the only men in the place.  The place oozed with feelings of enjoyment all round as the winners were announced–public golf at its very best. 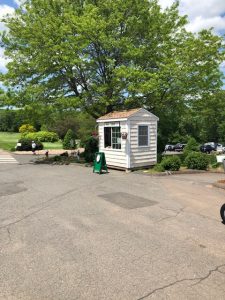 The starter’s shed at Timberline