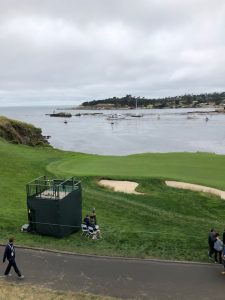 Overlooking 6th fairway with Stillwater Cover in the background 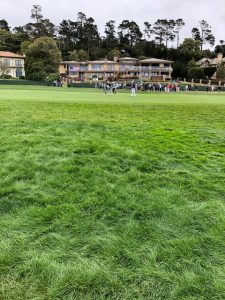 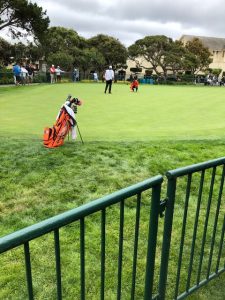 US Amateur Champion, Viktor Hovland 2 shots behind for the lead in the amateur ranks of the competition

The 100th US Open at Pebble Beach is shaping up to be a phenomenal event as the leader board is tightly bunched with the cut line of +2, which is 11 shots behind the leader, Gary Woodland. Pebble Beach is shrouded in gray marine layer skies  coupled with very little wind, which is enabling players to be a bit more aggressive than they might otherwise be.  Conditions on Friday afternoon began to change somewhat as the cooler temperatures seemed to be make putting more difficult for the field.  There are number of great 36 hole tidbits:

Gary Woodland, leader at -9  -Woodland is known for his ball-striking but not his putting.  He is making everything. (9 one putts) Two significant highlights came on his final two holes–No. 8 and No. 9.  On number 8, his approach shot barely cleared the hazard and sank behind the sand trap.  He was able to get it up and down with a very difficult putt.  On the 9th, his terrific drive landed in a divot hole some 207 yards from the green–a bad break for a nearly 300 yard drive.  No problem, he flushed what seemed to be a four iron to the green 49 ft. from the hole.  He holes the putt for a birdie 3 to take a 2 shot lead into the weekend.

Louis Oosthuizen, 3rd at -6  Oosie had a Dr. Jekyll and Mr. Hyde round with 7 birdies, 6 bogeys and 5 pars.  He made a number of terrific iron shots coupled with some adventures in the thick rough.  You really have to keep your composure as not only is it a tournament–it is the US Open.

Dustin Johnson, 19th at -2  Dustin could have been “spitting tacks” with the number of putts he missed in the second round.  He played extremely well tee to green but at Pebble, the ball has to be below the hole if you want to take advantage of the birdie opportunities.  Johnson will have to go low on Moving Day to get into position for a chance to win on Sunday.  It is possible as scoring at this event normally will rise in the final two days.

Sepp Straka, 19th at -2  A virtual unknown in the US, Sepp is from Austria and was in cruise control as he approached the easy 4h hole.  His drive nearly found the green and a few minutes later, he was missing a three footer for bogey and stopped the momentum.  Such is the nature of a major.

Justin Rose, 2nd at -7  Rose is playing extremely well and putted extremely well in the first round but didn’t duplicate it in the second round.  Rose is a force to contend with significant experience and great shot making which is necessary to win a US Open.  Rose is a wily veteran who should be a significant factor on Sunday.

Brooks Koepka, 6th at -4  Defending champion and fierce competitor, Koepka has put himself in position to potentially win a third consecutive US Open.  He will have plenty of competition on Sunday as the field is significantly bunched up through the first 36 holes.  He is playing steady and well throughout the event and his experience will be a positive factor especially coming off a major victory in the PGA Championship.

Tiger Woods, 32th at E   I wouldn’t count Tiger out just yet.  He will have to go low on Saturday but a 66 or 67 will put him in the mix for Sunday.  He’s playing pretty well and has a lot of confidence but can’t seem to get untracked to build the momentum.

It’s hard to pick a winner but I think the field will begin to separate further on Saturday where 20 players will have a chance on Sunday.  If that happens, it will make for a wild finish here.  I don’t think the leaders can extend and I feel that the field will bunch up into these 20 players.  It’s been a pleasure to attend the event in person as it is very well organized and the crowds are reasonable in size so you can actually see some golf.  Weather conditions are expected to be similar for the final two days but anything can happen-especially if the wind starts to blow.

← Women's US Open, Cordevalle Renovation and Other Stuff Gary Woodland Wins the US Open →