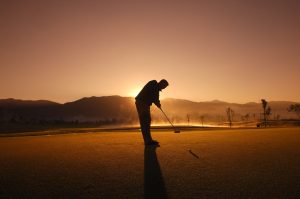 We may have discovered that the Corona Country Club exists but it might be only available if you have 5G.  It seems that Corona might have some structure but it is ethereal at best.  An apparition by the infamous golfer, Shivas Irons, revealed some interesting information.  Shivas Irons is the infamous golf professional from Michael’s Murphy’s famous golf book, “Golf in the Kingdom.”  Murphy has been searching for Shivas Irons ever since the day he spent playing with him at the mythical  Burningbush Golf Club in Fife, Scotland.  Shivas has the swing of Bobby Jones, the grit of Ben Hogan, the power of Tiger Woods and the course management skills of Jack Nicklaus all rolled into one.  Murphy remembers the thunderous drives of Shivas, delicate feathery iron shots and razor focused putting that produced a spectacular almost effortless round at Burningbush.  Murphy makes the horrible mistake of plotting his score before the round begins.  His ball falls off the first tee at address and then proceeds to make a four.  Murphy then hooks his drive on the second, dunks his approach chip shot in the bunker and makes double bogey.  When asked for his scores for the first two holes, Murphy replies 4 and 6.  Shivas Irons then pipes up, “Ye had a five oon the first.”  “Ye must count that one ye knocked off the tee when ye took yer waggle,”, Shivas says sternly.  “Now Michael, “ye must rimember that ye’re in the land where all these rools were invented.  Tis the only way ye can play in the kingdom.”  Murphy is devastated by all of this and continues to try to plot his round to score, but his game only deteriorates and he shoots 90.  Murphy has violated the adage of “one shot at a time” and Shivas is  not only there to remind him but to press the unalterable state of the requirement of the game.  It’s no wonder that Shivas shows up at Corona.  It turns out that Shivas Irons is the President and Chairman of the Board of Corona but we still don’t know where the club is.  By the way, he doesn’t have a reserved parking space.  We were able to get a special zoom phone conference that stumped me as it was a 22 digit phone number with a direct connection but no video.  We asked Shivas where the club was but his answer was at best obtuse.  “Ye kniw the club is located at thee center of the golfing universe where the skies ar rife ith glorie and glee.”  We asked him about course conditions and the number of rounds being played.  He told us that there was no play being allowed at the present time due to course maintenance and that the facility was in dire need of toilet paper.  We asked him about the difficulty of  the par 6, 697 yard 16th hole.  The 16th starts with a narrow fairway similar to the 18th at Augusta or the 7th at Pasatiempo for about 260 yards.  The hole then opens wider for the next 300 yards; however, there are bunkers on both sides of the fairway and a diabolical bunker in the center of the fairway at the 150 marker.  Two phenomenal shots will set up a birdie opportunity from about 160 yards to cross a chasm leading to the elevated green.  There is no room between the center fairway bunker and the chasm so the best you can do is a 155 shot to a severely elevated small green surrounded by bunkers.  Shivas uttered, “Ay tis a rel tizzy but a special un.”

Shivas then told us about the upcoming World Match Play Event at Corona but was not precise about the timing.

It’s the USA and North Korea vs. China and Russia.  The participants are:

Donald Trump–handicap 2–winner of 24 club championships throughout the United States and Scotland  His team mate is Kim Jong Un–North Korea club champion with over 600 holes-in-one-all verified.

Xi Jinping–Xi actually hates golf and has forbidden participation by government employees–he secretly carries a 3 handicap.  His team mate is Vladimir Putin–usually seen shirtless on horseback but is a stealth player

Fox Sports with Joe Buck commentating will be televising the event.  Sean Hannity and Rachel Maddow will be the on course roving reporters.

Having struck out on Corona’s location with Shivas, we will look for alternate sources–there is a new rumor that it is in the State of Connecticut.