Golf in the Pandemic 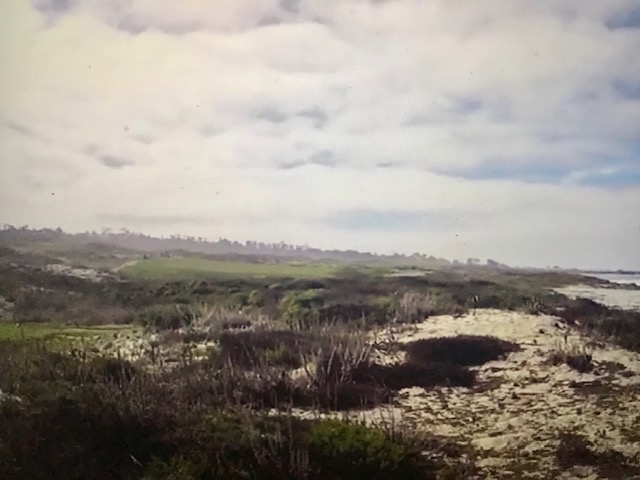 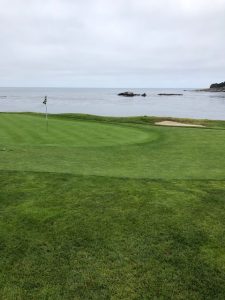 We’ve been living through a difficult time in our lives since the end of February and the closure of golf was a real body blow.  I was hitting 5 irons from my Spyglass back yard into the virgin fairway on the 13th hole and then picking up the balls as if I were warming up for a round at Port Marnock in Dublin, Ireland.  I bought 24 plastic golf balls and practiced chip shots over the pool at my home in San Jose.  I have one of those artificial turf practice putting mats where the balls are automatically returned.  This gadget actually helped my putting immensely. It was difficult for all of us who love the game.  Doubts begin to creep in as to what will happen to your swing, will you be able to play at the same level that you were playing before?   Fortunately, by the end of April, state health officials allowed the golf courses to reopen with a set of policies and procedures that would enable resumption of play for public and private courses alike.  Unlike the rest of the country where mask wearing has become a hot political issue, golfers didn’t care what the rules were.  Golfers are disciplined to follow the rules and have played the game forever under a rule book that can be best described as inane and counterintuitive.  Golfers don’t care if their civil rights are violated as long as they are allowed to play.   The interesting part of the return of golf is that the game becomes the centerpiece and not the country club or fancy resort with all the usual amenities.  There is no “bag drop” as you trunk slam with your clubs and put on your shoes in your car whether you’re at Pebble Beach or Sunnyvale Muni.  At the beginning of getting to the courses, things seemed pretty anal.  No tees, scorecards or pin sheets were available or in some venues they were available in a sealed plastic wrap.  There were no complaints and smiles abounded aplenty as play offered a welcome respite from 2 months of watching kids, preparing meals, on line education or watching grandchildren while their parents worked their virtual job.

The courses are in great shape and haven’t seen a divot in over 3 months.  Play began to speed up without touching flagsticks and no rakes in the bunkers.  All of a sudden rounds are taking 4 hours in public venues instead of 5 or worse.  Spacing on the course means little to no waiting enhancing the experience, which may cause an actual increase in rounds played.  There is little to no 19th hole activity as early on the message was, “Please leave the premises on the completion of your round.”  “Thanks for Playing.” It’s like your mother calling you home for dinner after the game.  We played Pebble Beach in an ungodly but wonderful  pace of 3 hours and 45 minutes.

The PGA Tour has done a terrific job to date at coping with the pandemic while getting tournament play underway with a unique schedule juggling act.  Professional golfers are also pretty good at following the rules as they are committed to keeping themselves healthy by not engaging in a bunch of extracurricular activities, which challenge other sports that are trying to reopen.  Playing tournaments without fans has certainly been weird for the players but I’ve enjoyed watching it.  Errant shots are no longer protected from disaster by galleries especially around the greens and you can actually see the shape of the courses.  The quiet is deafening without the fans, without the “Get In The Hole!” being shouted from every shot the professional hits.  Many fans felt that the professionals would be rusty from the absence of competition but the opposite has occurred.  Most of the events have had cut lines that are under par as the level of play seems to have been elevated.  The majors are coming up except for the cancelled Open Championship and it will be interesting to watch these events during times on the calendar that we’ve never seen.  I won’t miss the nonsense of the Ryder Cup and the jingoism that the fans bring to the event.   The event might have been interesting without fans watching professionals compete just like we do on a Sunday afternoon Nassau but the remainder of the calendar cannot accommodate the event.  Maybe we’ll get rid of the President’s Cup and put on a good show next year.

The pandemic will be good for golf with renewed interest in the game itself.  It’s a glimmer of light in the darkness of the economic dislocation for many and difficulties that the US and the world face in recovering the health of the world.  It’s a chance to get the kids and grand-kids out of the house and take a few swings in the earth’s newly found clean air as one of the unexpected benefits of the pandemic.  The game provides a much needed respite from the virtual meeting routine of the day whether it’s at the driving range, playing the local pitch and putt or getting a few holes in on the course.  The game has endured for centuries through prosperity, wars, plagues and economic disruption-it will continue to provide society with a much needed distraction in these troubled times. 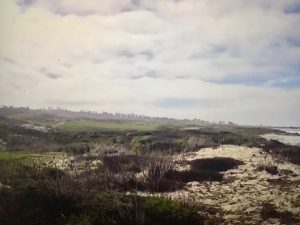