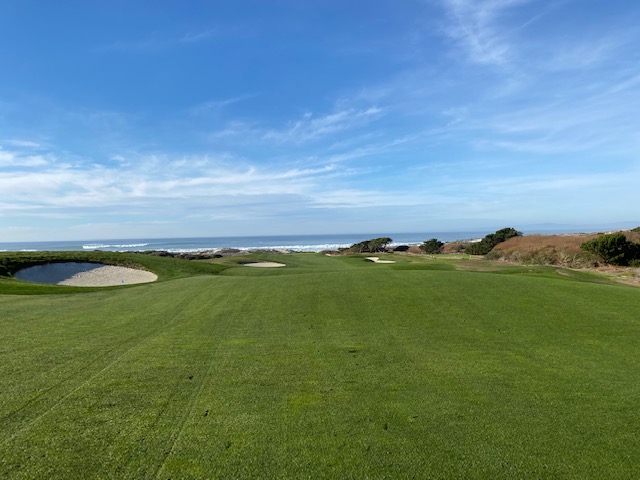 The pandemic must be getting to me.  Seeking a little variety from what has become the norm of playing the venerable MPCC (Monterrey Peninsula Country Club) wonderful venues, I decided to have a round at Pebble Beach’s Spanish Bay.  A number of strange, little, dull, unimportant factors for the reader’s of this piece came into focus.  My playing partner cancelled our Monday starting time citing potential horrific potential downpours and pestilence and moved our tee time to Thursday.  I had reluctantly agreed to this change as the rains and attendant horrible weather never came to the Peninsula on Monday but I maintained my silence and agreed to the revised date.  What was quite weird was that Thursday’s  climate opened to the best day of 2021 (best day in at least five months) with brilliant sunshine, warm temperature, virtually no wind, which made for outstanding playing conditions.  Contrast this to the past Saturday, whereby I played Poppy Hills in abominable conditions as the forecast of a “little light rain” actually turned into a maddening deluge.  Rain gloves were out on the warmup on the driving range.  I believed full rain gear was not necessary as the rain would be “light and drizzly” and would eventually clear.  The rain gloves never came off and I was soaked through my skin and the clubs would take two days to dry off as I trudged back into the house looking like a bedraggled soul who lost his last friend. It was also a completely weird round as I birdied the first two holes as my playing partner remarked, “You play better in the rain and the worse things get, the better it is for you.”   It had been over a year since I had played in these conditions and had to use the family dryer and a hot shower to become human again. Back to Thursday at Spanish Bay, I also noticed that the ocean was pretty angry and waves were cresting to the 10-12 foot swells–this condition is highly unusual (if not unique) during a day of significant calm and brightness.  All of this seemed to be very weird and this condition is what makes golf so special.  You never what you’re going to encounter every day you venture onto the course, something is always different.

Spanish Bay seemed different.  Usually, the course seems to be crowded and the staff a bit indifferent as you approach the first tee.  Spanish is the least renowned of the Pebble Beach Company’s three layouts as if the orphan to the Top ranked courses at Pebble Beach and Spyglass.  Rounds at Spanish seem to take forever since there are a number of places where errant shots will gobble golf balls by the dozen and the course evokes a number of four letter words and expletives deleted.  Having played the course a number of times, I began to notice subtle changes as we headed out after our tees shots found the middle of the fairway.  The course just seemed to be “tidy.” despite the challenges of the “environmental sensitive areas.”  It seemed as if the course had been to the hairdresser after a period of scraggly, ugly “do’s and was begging to demonstrate its inner self.  It’s hard to translate these conditions into a new reality.  The course seemed to be telling you, “I have been to the decorator so just play well.”  It’s a makeover without being made over.  I thought that perhaps all this was nonsense as I playing well with hitting greens but the menacing scrub, high grass, ice plants and junk just seemed to be in the background instead of thinking how to avoid such stuff in your approaches.  The par 3, eighth hole is 160 yards over a marsh and bog with a green so horizontal that usually a well hit shot may find the green and bound off to the back trap or suffer some unknown malady.  I didn’t even notice the bog and the marsh and played the shot as if the hazard didn’t exist.  Usually, I’d be worried if I have enough club to clear the bog but today this concern never even registered.  Not today, my tee shot found this green and I fully expected it to roll off into the back bunker but there it lay 12 feet from the hole.  The difficult, par 4 seventh where the bog cuts through the fairway with high reeds on the left seemed to be cut down so that the entire hole was visible.  On this hole, some definite changes were made as the first 125 yards were completely laid bare devoid of the rough and spinach and now provided a better  visual as to the task at hand.  The second shot requires an approach over the marsh and sand dunes have been imported on the green side of the marsh instead of the junk and fescue that was previously there.   I’m sure these changes were made to reduce water usage on the hole but it’s a win/win for the player since these subtle changes don’t make the hole easier but the hole becomes more visual and easier for the player to think about the route for the second shot.  The par 5th 10th hole is another example of how simple landscaping techniques doesn’t impact the severity of the hole but it becomes more visual to the player.  The tee shot of the 10th used to and essentially still does require a carry of about 175 yards to the fairway as it doglegs to the left.  The usual view of the hole is to carry a bunch of vegetation and high grass that doesn’t really come into play but can intimidate the marginal player.  All of this junk has been cut back enough so that you can actually strategize what you want to do and you can make choices to take a more aggressive line to the fairway.  Previously this was possible but not easy for the marginal player.  The very difficult 12th hole also has a cleaner look especially the approach shot to the green, which for most of us is a third shot of 100 yards or less.  The weirdness continued as you could actually see the 15th and 17th fairways, which is usually shrouded in coastal fog and mist.  I had a very nice round going and loaded up on a 4 iron for the par 3 16th hole of 175 yards all pumped up.  Pumped up alright–I smashed it 40 yards left over the dunes and out of sight for a humbling double bogey on one of my favorite holes on the course. 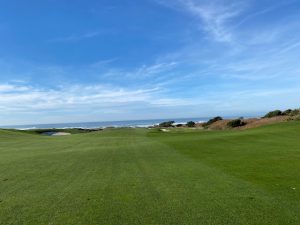 View from the 14th fairway down to the ocean

We then reached the 18th hole and I made my usual obnoxious announcement that the 18th is one of the worst designed golf holes on earth.  It’s in my books and another blog post as one of the worst golf holes I have every played and on and on.  My partner managed to smash his tee shot too far to the right after announcing how much he liked the hole to get under my skin.  I said nothing as I know he really agreed with me.  However I may now have to eat these words as the 18th wasn’t left out of the grooming and touch-ups that were made on a number of the other holes cited here.  The hole is a par 5, 526 “boot”–why “boot?”  The hole is straight-away for about 390 yards and then you hit an approach shot from 100-130 yards over a pile of scrub to a green that is horizontally long but vertically shallow.  So what changed?  It seems that the area for your approach has been widened with a bit more fairway so the third shot can be shortened from 100 yards to 50-60 yards reclaiming fairway instead of hazard.  It doesn’t make the hole any easier but it makes the hole more playable and hence perhaps–might come off my “worst list.”  I still bogeyed the hole but didn’t storm off the green in anger as I usually do–I just missed a 12 ft. putt for par.

Perhaps my whining and complaining about Spanish Bay had something to do with this subtle but handsome upgrade but I sincerely doubt it.   It demonstrates the potential of the golf course and reveals yet another feature of why golf can be so ethereal.