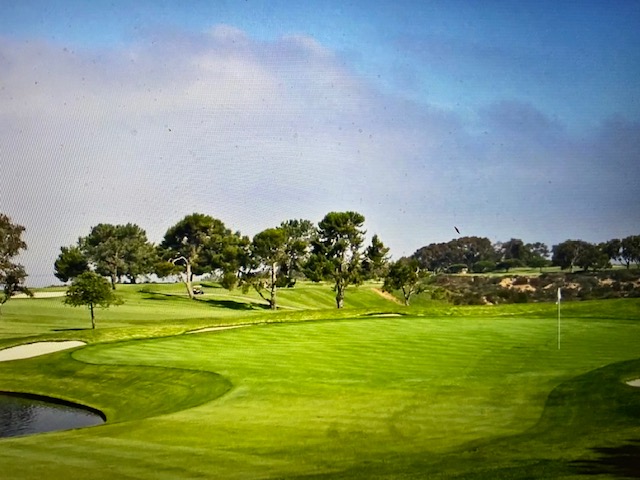 The PGA seems to be off to a lackluster start in 2021 impacted by the continued elimination of fans as the pandemic roars on.  Prominent player “names” on tour are struggling as Jordan Speith, Brooks Koepka and Xander Schauffle can’t seem to pull four rounds together.  Tony Finau continues to falter in final rounds and now stands out as one of the best players to have never won a major.  The biggest news item thus far this year is Justin Thomas’ gaffe a few weeks ago in Hawaii.  The situation isn’t going to get any better as next week’s Phoenix Open will have no more than 5,000 fans per day in an event that always has drawn over 200,000 fans.  The amphitheater at the 16th hole that treats the players like the Romans treated the Christians probably won’t even be constructed.  The AT&T Pebble Beach/Pro AM will have no AM and therefore no celebrities playing and no fans watching.  I’ll be watching from my home that adjoins the 13th hole at Spyglass and hoping that I may be able to roam around a bit (highly doubtful).

This week had a new controversy at the tournament in Torrey Pines.  On Saturday’s third round, leader Patrick Reed dumped a shot into the rough on the 10th hole.  Reed claimed that the ball was “embedded” and that he was entitled to a drop.  The ball had taken a bounce off the rough  and into a new position (there was a lot of chatter whether the ball bounced) and there was some TV serious banter that intimated that the ball may not have been “embedded.”  The rough was pretty wet from the rains of the prior day so I’m pretty sure that there was a good chance that the ball was embedded.  Reed has been criticized in the past for some unsavory acts in some other events and here he picked up the ball from its position and then summoned a rules official and his playing partners.  The official was satisfied with Reed’s explanation and play resumed without penalty.  While Reed’s decision was ratified by the official, given his prior alleged incidents, there was a lot of TV commentary and fans that Reed should have not picked up the ball.  He should have waited for the rules official to make the decision on whether the ball was embedded.  It was clear to me that the TV broadcast was trying to create some controversy over the move and none of this would have happened but Reed’s “checkered” reputation fueled the discussion.  The TV commentators including the droning Jim Nantz continued the discussion Sunday during the final round as it seems that there was overhang that somehow Reed had cheated.  PGA rules officials supported Reed’s actions as legal and proper and that should be the end of it.  My opinion is to let the officials that run the tournament enforce the rules of the game instead of this back channeled criticism from the pundits of TV golf.  If Reed’s reputation hadn’t been tarnished by some past purported indiscretions, these comments probably wouldn’t even been made.

Reed put his head down and played enough mistake free golf in the final round of the tournament and emerged victorious.  None of his challengers could mount a serious  challenge on a day where conditions were okay but not really conducive to low scoring.  Victor Hovland stayed in touch but the 14th hole was his undoing where his approach shots on Saturday and Sunday flew the green into the penalty area.    Tony Finau’s troubles continued as his late charge on Sunday was thwarted.   He plunked his second shot to the 18th green into the pond that guards the green.  In sunshine and dryer weather, the 18th is very reachable by these guys but conditions were cool and damp and Finau’s shot found the lake.  I was a bit surprised that Jon Rahm faded in the final round as a former winner of this event finished tied for third.  Rahm’s game really suits this course as Torrey Pines South Course plays long in California winter weather conditions.  Rahm simply couldn’t hit enough quality shots

The South Course at Torrey Pines will host the 2021 US Open.  Assuming the event takes place at its usual time in June, this will be a different golf course with a more difficult set up  of narrower fairways and faster greens.  I like Rahm’s chances in that event with his length and grit.  This is the site of Tiger’s last US Open victory where he defeated a resurgent Rocco Mediate in a Monday morning playoff with Tiger surviving physically from his back in a courageous performance over Mediate who probably would have beaten anybody else that day. 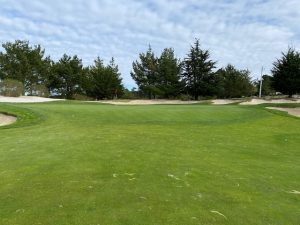 The last blog covered some points regarding anger management and whining.  I am embarrassed to admit that I was guilty of one of the worst whining incidents ever.  I was playing at Monterrey Peninsula Country Club’s Shore Course.  It’s a wonderful course but I do dislike the18th hole intensely.  The hole made my list of one of the worst holes I have ever played.  The hole is a par 4 of 390 yards that veers to the right but not quite a dog leg.  The approach shot is to a green that is severely elevated.  The green has a mound about 12 feet from center.  None of this is apparent from the tee box as all you can really see is fairway on the left and a huge menacing bunker on the left.  As usual, I announce to my playing partners how much I hate the hole as I crush a drive down the middle of 237 yards.  I have a 153 yards left up the steep hill, which will play from 175-180 yards and today there is a little wind behind us.  The problem with this hole is that you can hit a great shot and end up in terrible places on the green to putt.  If you’re short of the mound, the ball will roll down off the green.  If you’re right on the flagstick, the ball is likely to release a good 20-25 feet towards the back of the green.  It’s almost impossible to make a putt above the hall or come up from below the mound.  All of my playing partners and I were virtually in the same place and all of us came up short.  I hit a 7 wood and it hit onto the green but could not make it up past the mound   My playing partners were in the same predicament albeit for different reasons.  I decided to chip the ball up the right side of the pin and try to make an easy par.  I thought I made the proper contact with the gap wedge but it went flying by the hole by ten feet.  I went through my normal fit of personal exasperation in silence expecting to post another bogey 5 on this hole as has happened many times before.  I had no confidence that I would be able to hole the putt from above the hole.  I read it to break from left to right slightly (1/2 ball) and then I thought I would lose it at the end and it would take a wicked break away from the hole in the last six inches of the putt.  I sighed and expected the worst and hit the putt and immediately started walking towards the hole and let out a howl from a nocturnal beast–another bogey 5–however, as I’m walking the ball takes that wicked turn all right but this time towards the hole and as I was to about to express my anger and disappointment, the putt miraculously dropped in at the end.  My playing partners immediately let out a roar for “whining” and I could have to no comeback, no excuse–the putt went in.  It was embarrassing and euphoric at the same time.

← Emotions on the Golf Course Koepka Returns! at the Phoenix Open →