Koepka Returns! at the Phoenix Open 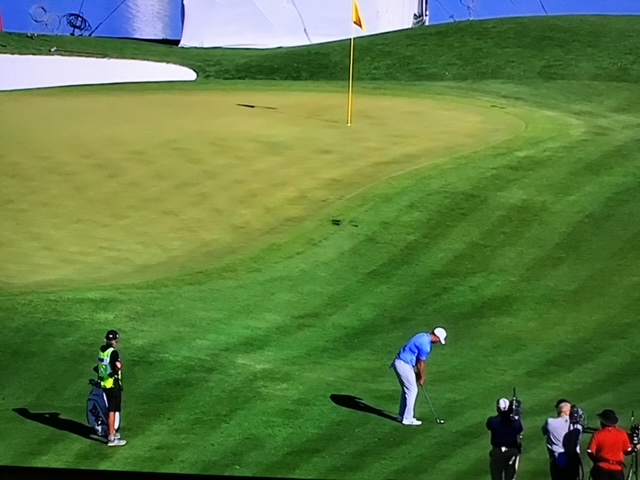 In the last blog, we lamented the decline of Jordan Speith, Brooks Koepka and to a lesser extent Xander Schauffle.  What happened to Speith?  First his renowned putting that vaulted him into major championship victories virtually disappeared.  I doubt any one including Speith really knows but I’m sure Golf Digest and a number of other pundits have some ready made inane answers.  I don’t think anyone knows other than the gods of golf that know all but reveal nothing.  After the putting went into decline, it seemed that balls started flying all over the place and Speith tumbled mightily from his previous lofty perch.  I always thought Speith had his ego in check and understands that the golf swing is complex and can go wayward especially at the highest level of the game.   He has spent a lot of time rebuilding his capability and I believe his innate steely confidence  has started to demonstrate results.  He didn’t win this week at Phoenix but he was in contention all the way to the end done in by Koepka’s wonderful eagle 2 on the 17th hole.  I felt that Speith really has it together since he went to the 18th hole three shots behind with no chance to win.  His drive caught the left hand spinachy rough and he faced a very difficult shot.  Mentally, he could have dialed it in but he hit a tremendous shot out of that rough and holed a 7 foot putt for a closing birdie.   It was the second week in a row that Speith had been in contention and his fourth place finish may give him the confidence to reemerge as a major factor on the PGA Tour.

Koepka’s circumstances were a bit different as he was beset by some nagging injuries that prevented him from being in peak physical condition.  Things started going south for Koepka in the final round of the 2020 PGA Championship in San Francisco.  Koepka was a few shots out of the lead going into the final round and fully expected to power through the field at Harding Park and claim his fifth major.  His final round was marred by a number of miscues and missed putts and he faded quickly into a tie for 29th with a final round 76.  It was a unique experience for Koepka who was used to being the lion that devours the competitors in the majors.  Here he was the prey and his final major was a decent showing in the Masters but finished tied for 7th and 10 shots behind the victorious Dustin Johnson.   It’s been a grind coming back but Koepka had to overcome injuries but his mental side was as tough as ever.  On Sunday, he powered through the leaders with brilliant play and a display of power golf.  He clinched the event on Sunday at the 17th hole, which I would describe as just short of miraculous.  The chip shot for the second shot on the exciting 17th was as delicate as you could ask for on a golf course.  The shot had to bisect a mound leading to the green and had to be struck perfectly to keep it on line.  I would give him another 100 balls and I would be surprised if he would hole another one.  With a 2 shot lead on the treacherous drive for the 18th hole, Koepka muscled the ball past the bunkers on the right, which are really tough to carry and proceeded to close out the tournament.

Kudos to Steve Stricker who at age 54 was trying to become the oldest winner on the PGA Tour.  Stricker fired four rounds in the sixties and was in contention until the very end as everyone was undone by Koepka’s eagle on 17.  He turned in an impressive fourth place finish.

It was amazing and almost pleasant to hear “get in the hole!” as 5,000 fans/ day were in attendance at the event.  The players miss the crowds and this tournament in particular is a raucous affair drawing almost 1 million fans over the four days.  This pandemic year yielded a precious 20,000 and when the tournament on Sunday came to a close, there had to be most of those fans on the final three holes.  I wasn’t sure the 16th hole amphitheater  would be built this year where 20,000 fans usually congregate in the stands with beachballs, catcalls and general mayhem are the rule of the day.  This year it seemed like an echo chamber but you could feel the enthusiasm of the fans that occupied the stands.

The TPC Scottsdale Stadium Course is my favorite venue in the world of desert golf.  The course presents significant variation from hole to hole and the desert provides the background for the course instead of having to carry desert obstacles on many holes which characterizes many other venues in the Phoenix area.  A great example of a very tough hole for the professionals here is the par 4th 11th hole of 485 yards.  There is water to the right of the hole that doesn’t come into play but water on the left actually flows from tee to green causing players mentally to keep the ball to the right center of the fairway.  Any misses on the tee shot to the right will end up with a tree challenged lie making it a difficult shot to reach the green. (photo below-James Hahn faced the music during the final round on 11).   The water on the left and behind the large green can be pretty intimidating as any wayward shot or in the wrong position on the green can easily produce a 3 putt.  I would rate the 11th as one of the toughest, if not the toughest, hole on the course for the professionals.  The exciting short par 4, 17th is almost drivable for the professionals and as the 71st hole of the tournament, it can be the game changer and this year, this hole decided the tournament with Koepka’s remarkable chip. 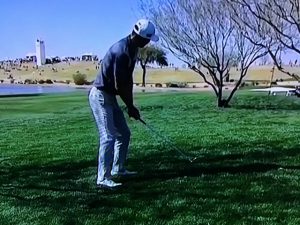 The PGA of America came out this week and issued a ruling that professional competitors can use range finders at its tournaments including the PGA Championship.  This rule seems a bit strange as its hard to imagine what problem the PGA is trying to solve and I immediately began to think about what a professional caddy is supposed to be doing.  It seems that the professional is already aptly informed with the yardage books, course layouts, pads and whatever that both player and caddy tote around the course during their round.  I can imagine new arguments about rule violations on the capability of these machines–will they have to be inspected prior to use during a round.  I’m not sure what problem the PGA is trying to solve here and it will be interesting to see what the USGA says about this.