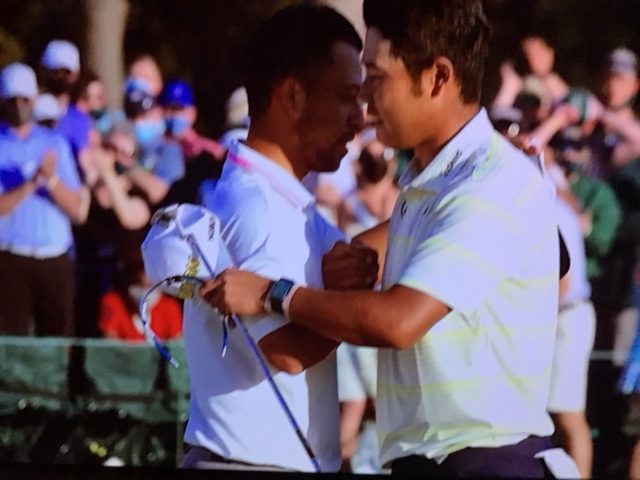 Hideki Matsuyama won the 2021 Masters but it wasn’t easy.  I would have bet against Matsuyama winning at the beginning of the final round as he’s been a leader in the clubhouse before and seems to have a balky putter that prevents him from closing the deal.  The field would have to put enough pressure on Hideki to overcome his lead and it came pretty close to happening.  Matsuyama held a commanding 5 shot leading coming to the easy par 5, 15th which the field labels a birdie hole.  The tournament was coming to an anti-climatic boring finish, which would make 2 boring Masters in a row.  I was about to head out to play and watched Matsuyama stripe his drive down the middle of the fairway.  With a five shot lead, all he had to do was to avoid the pond in the front of the green and in the back–his second shot needed to meet dry land.  There is so much adrenaline running in your veins that it made no sense to lay up from where he was-so he whacks a middle iron which races through the green with pace and ends up in the pond behind the green.  Are you kidding me?  How could this be possible?  It was not only possible but now it was a fact and now it was becoming highly uncertain as to what was about to occur.  Matsuyama proceeded to play an indifferent chip from the drop zone and faced a treacherous down hill putt.  He did manage to get up and down to make bogey while his playing partner Xander Schauffle got up and down from the greenside bunker to make birdie and now the 5 shot lead was 2 with three holes to play! Schauffele fought valiantly back into contention after having a terrible front nine where at one point he was 4 under par (seven shots behind) and wasn’t even being shown on television. He fought his way back and now he had a shot.  That opportunity didn’t last more than 5 minutes as Schauffele dunked his short iron shot left into the pond on the 16th probably trying to go pin seeking.    Matsuyama’s heart must have been pounding before that shot and now all he had to do was to find the putting surface to lengthen his lead.  Meanwhile, up ahead Will Zalatoris was hanging around and was only 3 shots back.  What was expected to be boring became exciting as Matsuyama carried his tee shot to the right side of the green where he would 3 putt for another bogey.  Schauffele ended up with a triple bogey six and Matsuyama could breathe a lot easier as he still had the 2 shot lead over Zalotoris.  Two pars for the green jacket and it became crystal clear what the task was…the tournament was his to win and only terrible errors could risk the championship.  It’s a lot easier to know what you have to do instead of trying to have to force something that could end badly.  Matsuyama navigated the 17th successfully in par and now he faced the final hole with that two shot lead.  After a good tee shot which left him only 125 yards, his pitching wedge ended up in the greenside bunker.  An excellent bunker shot and two putts was enough to secure the victory (heart still panting).  It seems a bit unusual to bogey three of the last four holes and win the tournament but it was enough for the victory.  The victory was the first major win for a Japanese player in the history of the game, surpassing the former great players of Japan such as Isao Aoki, Jumbo Ozaki and Tommy Nakashima.  He had accomplished what none of these great golfers could ever do.

It was a bit of a weird tournament with Justin Rose charging out of the gate in round 1 with a 7 under 65.  Rose had not been playing all that well coming into the tournament but on Thursday he found his tempo and played error free with 65.  Rose would not be able to improve on 7 under for the balance of the tournament although he held the lead for the first 45 holes under the Saturday rains came.  The course had been difficult all week up to the Saturday afternoon rains–greens were hard, dry and fast.  Matsuyama teed off on the difficult par 4th, 11th and the horn sounded shooing the players off the course as thunder and lightning were on the way.  As the storm passed and play resumed, Matsuyama caught fire with a spectacular birdie out of jail on the right on 11 to get to 7 under.  He proceeded to birdie 12, eagle 15, birdie 16 and 17 to get to 11 under par and a four shot lead.  A number of pursuers would emerge for the final round at 7 under including Schauffele, Zalatoris, Mark Leishman and Rose.  Jordan Speith was playing well at 5 under with a number of chip ins, long putts and the occasional triple bogey.  He would need a special round of 65 or 66 to vie for another green jacket.  The Saturday rain storm changed the event as players could go after pins knowing that the greens had softened considerably.  The surprise of the tournament was the outstanding performance of young Will Zalortoris.  Will is not yet a household name on the PGA tour but he has a sweet swing, excellent tempo and outstanding mechanics.  He had an “edge” and demeanor about to demonstrate that he was not going to collapse under the pressure of this event despite his relative inexperience.  Zalortoris could make videos as to how to play the game quickly and efficiently as he sized up what he was trying to do, selected a club and pulled the trigger quickly.  Jon Rahm came to play on Sunday on the final round.  He was clearly “in the zone” and couldn’t miss a shot.  Any shot he might have missed was compensated for with an excellent chip or great putt.  He started the final round in 24th place and ended up tied for 5th with a final round 66.  It seemed that he wanted to keep playing after he holed the last putt on 18 and would have won this event had it lasted any longer.  Then there were the also-rans most notably Bryson DeChambeau.  The golf gods may have reprogrammed Bryson’s computers during the night as he was consistently off his yardage calculations, flying many greens with his short irons.  He continued to approach the course in a quizzical manner.  After a thunderous drive of 330 yards on the 15th hole in the final round, you would expect a possible eagle opportunity but Bryson’s six iron found the pond in the front of a green leading to another bogey.  It seems that Bryson might be doing penance for his 2020 proclamation that Augusta National was a par 67.  He will need to completely rethink his approach to this course in future events and get that software upgrade.  World No. 1 and 2020 Masters Champion, Dustin Johnson missed the cut with plenty of uneven play that he couldn’t overcome.

Despite his checkered finish, Matsuyama’s victory is a statement of patience and persistence.  Matsuyama’s final round started with a horrible tee shot on No. 1 which lead to an opening bogey.  He recovered and played consistently throughout the middle of the round to build a five shot lead and then hung on to win.  He was fortunate in that Schauffele couldn’t convert on 16 putting him in the controlling position that he was able to execute. 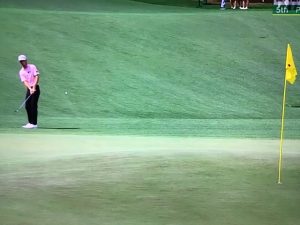 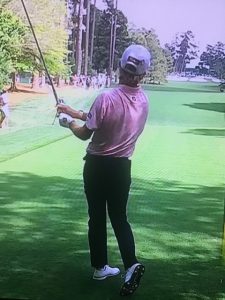 Wlll Zalatoris tee shot at No. 7 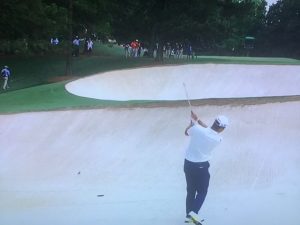 The Masters is becoming a tournament where Augusta National is on the cusp of becoming obsolete.  Today’s professional is just too long off the tee and the fairways are just too wide without any appreciable rough to penalize the powerful hitter.  The average drive is close to if not more than 300 yards leaving the course to becoming a putting contest.  The greens will always be Augusta National’s greatest defense and the weather conditions will dictate the level of scoring.  This year the rain delay changed the course considerably and the players responded.  I’m not sure what to do, if anything, about the course but making the course 8,000 yards is not the answer.  It’s still a wonderful venue and class event and I’m sure this course will continue to stand the test of time for years to come.  It was nice to see patrons on the course although the numbers weren’t large enough to create the thunder that is usually heard throughout the course.  Nevertheless, the tournament was an interesting upgrade from Johnson’s runaway finish in the fall of November, 2020.  The Masters is simply not to be played in the fall as the course is usually closed by then.  Matsuyama’s caddy gave the tournament ultimate respect with a classy bow as Matsuyama walked off the green.  It was a gesture of class and respect and certainly warmed the hearts of the ardent Japanese golfing public.